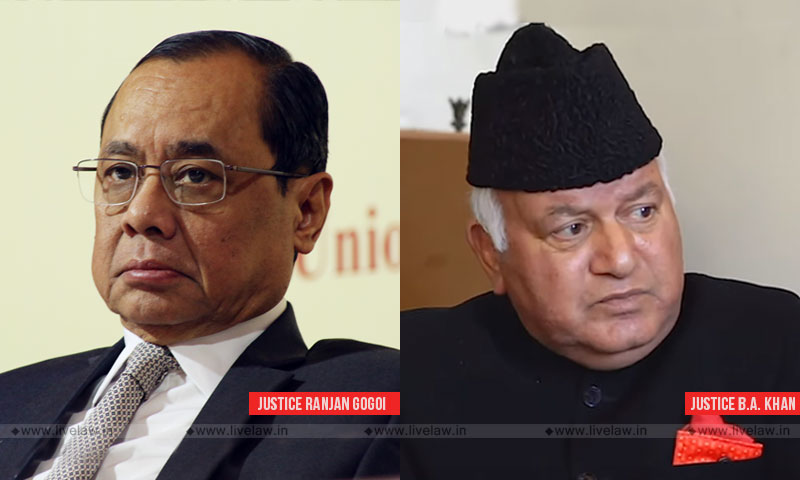 I have heard all the three interviews given by Ranjan Gogoi to leading TV channels in which he sounded aggressive and brash as usual, besides peevish and immature.

His explanation or justification for accepting the Rajya Sabha nomination also appeared ridiculous,  if not absurd. At times, it sounded laughable. His immaturity and shallowness knew no bounds when he went personal against his one-time colleagues,  declaring Justice Katju "irrelevant" and discrediting Justices Madan Lokur & Kurian Joseph - with whom he had gone public to warn the nation of threat to independence of judiciary-  because of their "failed ambitions". God knows or may be Gogoi knows what was their "ambition"!. No one in his right frame of mind could say that their case was of failed ambitions for having lost on Chief Justiceship against Gogoi, because it is common knowledge that they could not be candidates for the top job, being late appointees. Also, they had openly declared during their term their unwillingness to take up any post-retirement assignments.

Ranjan Gogoi knows and so do all in legal fraternity that it is mostly those with influential ancestry who make it to the highest position after being appointed at a young age, regardless of any merit or suitability for the job of Chief Justice of India. It is unfortunate that people with influential backgrounds possessing no suitability for the top job are catapulted to the high positions, who mortgage all norms of propriety, morality and judicial ethics for a petty self-gain.

As regards justice Katju, he has always acted as a whistle blower and has exposed wrong doings in judicial functioning. What makes him irrelevant when it comes to Gogoi's impropriety begs an answer.

Mr Gogoi's washing of dirty linen against Justice AP Shah is unethical and violates his oath of secrecy. It does not behove a former CJI to go public with confidential records of a former state Chief Justice. He has only exposed his shallowness by doing so and if he is permitted to go unbridled, then one can legitimately ask several questions on the alleged cover up in the sexual harassment case against Gogoi himself. Having come in public life after tarnishing the image of judiciary, Mr Gogoi should now learn the ropes and put up with dissent sportingly.

Ranjan Gogoi has gone hyper technical and ultra-legalistic in his sham defence. He asks if there existed any quid pro quo, then why should he have opted for a small position like Rajya Sabha seat . What a frivolous explanation coming from a person having held the highest position in the land!. Why can't this projected legal luminary understand that his rating was fixed as per his record. If he has missed the bus by not asking for or getting a higher position, that is his loss. One feels that his predecessor Justice P Sathasivam acted smart by bargaining for Governorship and got it.

Mr Gogoi also says that though he depreciated post retirement assignments given to retired judges, it does not apply to him because Rajya Sabha was not a regular post retirement employment as he has to attend the session only for 65 days in a year.

This part of Mr Gogoi's argument would have to be taken with a pinch of salt. Because, the issue is not whether Raja Sabha seat is a regular employment or not. The issue is whether you have lowered the high office of CJI in public estimation for a petty self-gain and for peanuts so to say. Could the majesty of the office of CJI be allowed to be brought down brick by brick by unworthy occupants in this manner?.

It is immaterial whether Mr Gogoi gets more or less salary as a member of Rajya Sabha. The fact is that he gets a six year term entitling him to a regular salary, allowances, free air and rail travel, residential accommodation in Lutyen's Delhi and what not.

Mr Gogoi also gives an impression that he has responded to a call for duty when he was offered nomination by president. He cites Article 80 of constitution in support. No one is that naive to believe that President saw an imminent legal luminary in him. There are dozens of them available. But only that one who can make grade is picked up by the Government of the day, making it a political appointment and everyone knows that it is not a free lunch.

Mr Gogoi has also talked of some "lobby" who has a stranglehold on judiciary, perhaps referring to his critics of the day. One would be within his rights to ask that if there is any such lobby, why did he not smash it when he was at the helm. Maligning and bullying critics is not the best way to silence them.
Summing up, Mr Gogoi's falling for a Rajya Sabha seat, casts a shadow on the functioning and independence of judiciary and poses a threat to scheme of separation of powers under the constitution. Besides, this act brings into disgrace the high office of the Chief Justice of India.
Justice B A Khan is a former Chief Justice of Jammu and Kashmir High Court.