Odyssey: A Genesis Of Chronicling The Experiences Of Women Lawyers

It has been a long journey since 1923, when Cornelia Sorabji was called to the Bar. Ms. Sorabji tread an arduous path, replete with gender discrimination and financial barriers. Despite, securing the top rank at the Degree Examination, which qualified her for a Scholarship to study at Oxford, Ms. Sorabji was denied the scholarship as it was reserved exclusively for men. This pioneer,...

It has been a long journey since 1923, when Cornelia Sorabji was called to the Bar. Ms. Sorabji tread an arduous path, replete with gender discrimination and financial barriers. Despite, securing the top rank at the Degree Examination, which qualified her for a Scholarship to study at Oxford, Ms. Sorabji was denied the scholarship as it was reserved exclusively for men. This pioneer, India's first woman lawyer thus charted a path, which has since been followed by many women. Today, the foot falls of women on this path charted by this exceptional woman have been increasing.

Former US Secretary of State

This group of Advocates had a completely unexplained discontent stirring inside them. They had been in the legal profession for two decades and half. They had lived through, the highly demanding profession, as members of the Bar and done well. Yet, the discontent was strong. Something was missing. They followed the dictum of Germaine Greer, whose words seem to inspire them to take tiny, but firm steps.

"Women must prize this discontent as the first stirring of the demand for life."

This discontented group of lady Advocates strived together to create and to nurture a platform for deliberations, discussions and simply meeting. This led to the creation of "Interactive Sessions for Lady Advocates". The interaction, exclusively for Women Advocates, ensures that the calm waters in the professional lives of Women Advocates, practicing at the Bar in the Hon'ble High Court, Bombay, are in a constant flux and provoke thought. For, it is in motion that one finds creativity. In the words of the famous Author Jane Austen "I hate to hear you talk about all women as if they are fine ladies instead of rational creatures. None of us want to be in calm waters all our lives."

The discontent that this group of women felt, translated into the creation of an interactive platform, particularly for young lady Advocates. This platform provided an ideal meeting point, where, there would indeed be frank deliberation, discussion and clash of ideas, inspiring young lady advocates to continue in the profession and to be an integral and important part of the justice delivery system.

On Saturday, August 03, 2019, the Hon'ble Ms. Justice Indu Malhotra, Judge, Supreme Court of India addressed a session on "Overview of the Arbitration Landscape of India" under the pyramidal roof of the gothic and historically most significant and largest Court Room of the Bombay High Court. The Saturday which saw monsoon fury in Mumbai did not in any manner dampen the spirit of the large turnout, despite, the public transport being severely affected. The Interactive Session of Women Lawyers in tandem with the Bombay Bar Association and the Advocate Association of Western India had organized the event. 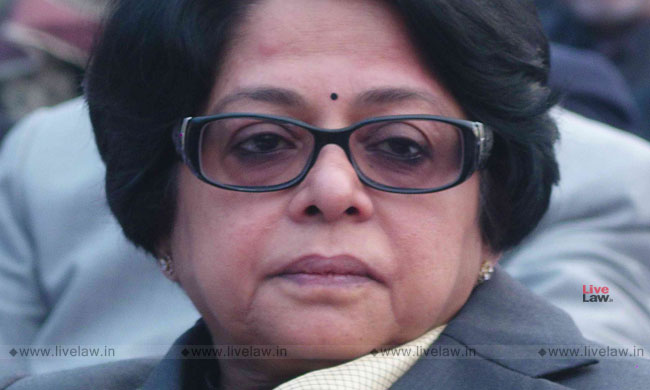 Justice Malhotra began with reference to the words of Justice D.A. Desai in Guru Nanak Foundation case "Interminable, time consuming, complex and expensive court procedures impelled jurists to search for an alternative forum, less formal, more effective and speedy for resolution of disputes avoiding procedural claptrap and this led them to Arbitration Act, 1940 ('Act' for short). However, the way in which the proceedings under the Act are conducted and without an exception challenged in Courts, has made lawyers laugh and legal philosophers weep. Experience shows and law reports bear ample testimony that the proceedings under the Act have become highly technical accompanied by unending prolixity, at every stage providing a legal trap to the unwary. Informal forum chosen by the parties for expeditious disposal of their disputes has by the decisions of the Courts been clothed with 'legalese' of unforeseeable complexity. This case amply demonstrates the same."

Justice Malhotra was incisive and scathing in her observations "I remember coming across cases which have been pending in arbitration for 19-20 years, which is shocking… Arbitrators would only work for couple of hours and adjournments were sought and routinely given. And arbitrators, I must confess as a member of judiciary, would actually treat it as an income post retirement and would be easy to grant adjournment because they would charge by every hearing."

Justice Malhotra spoke of the recommendations made to set up a centralized flagship Institution namely, the International Centre for Alternative Dispute Resolution. Justice Malhotra in her address also provided a detailed historical matrix of Arbitration Laws in India.

On that rainy Saturday, when the rain did not show any respite, the hallowed Central Court Room or Court Room No. 46, as it is generally referred, was a full house, over flowing at its seams.

On earlier and subsequent occasions, this interactive platform has been graced by various eminent judges, jurists, speakers and dignitaries. The lectures delivered have been enthusiastically received by the Women Advocates practising in the High Court, City Civil Court as well as the Family Court and Magistrates' Courts in Mumbai and Thane.

Lady Brenda M. Hale, who had the distinction of becoming the Senior most female Judge in British Legal History, in her lecture on "Equality in Judiciary", referred to Lord Jonathan Sumption and quoted the contents of his Bar Council Law Reform Lecture. thus:

Lady Hale went on to add

"if so, I must have made a lot of enemies since I first started delivering lecturers about it around the turn of the century".

On diversity, Lady Hale stated "I too used to be sceptical about the argument that women judges are bound to make a difference, but I have come to agree with those great women judges who think that sometimes, on occasions we may do so. That is the result of the lived experience of being a judge for 19 years now and a Law Lord for nine……………..Robert Stevens has argued, "The reason why England needs a more diverse bench is because there needs to be a greater diversity in the 'inarticulate premises'". ………The great Lord Bingham seems to have agreed. He pointed out that merit "is not self-defining". It "directs attention to proven professional achievement as a necessary condition, but also enables account to be taken of wider considerations, including the virtue of gender and ethnic diversity".

Thus, there is a deliberate and defined action in the UK and some other countries for ensuring diversity in judiciary. In India, a Society plagued by female infanticide, gender stereotypes, skewed gender ratio, the diversity has to be ensured but the efforts ought not to be limited to judicial appointments but equal opportunity to all, including genuine opportunities through mentoring at the Bar.

In a profession, with skewed participation of the female professionals, these interactive sessions at the High Court, Bombay, usually held on Friday evenings; aim at providing continuous legal education and improvement opportunities to an increasing number of Women Advocates, Solicitors and particularly new entrants in the profession including law students. These lectures are presently held in Court Room no. 21, 1st floor, High Court, Bombay.

These interactive sessions are but a bold and first step for ensuring an increase, in the participation of Women Advocates, in the challenging legal profession.

"By hook or by crook, I hope that you will possess yourselves of money enough to travel and to idle, to contemplate the future or the past of the world, to dream over books and loiter at street corners and let the line of thought dip deep into the stream"