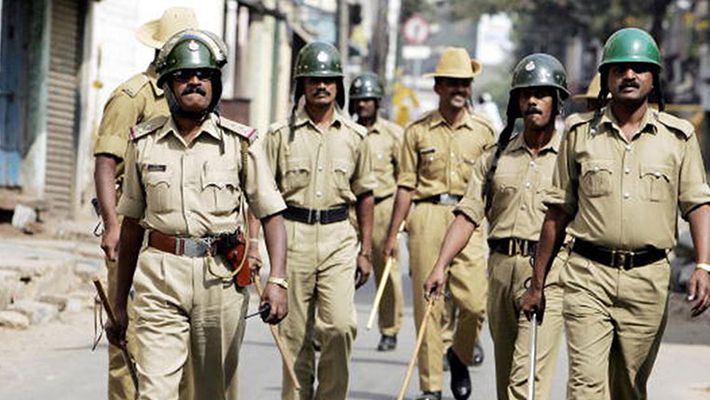 Lately, there has been public distress about policing which calls for strong police reforms. The "2019 Data on Police Organization by Bureau of Police Research & Development" suggests that there is a shortage of policing resources and tools, and thus, to tackle the same, India not only needs an augmentation of budget and grants, but also an evaluated resourcing. This blog employs...

Lately, there has been public distress about policing which calls for strong police reforms. The "2019 Data on Police Organization by Bureau of Police Research & Development" suggests that there is a shortage of policing resources and tools, and thus, to tackle the same, India not only needs an augmentation of budget and grants, but also an evaluated resourcing. This blog employs the latest government data and survey reports by civil societies and research groups, to evaluate the status of human resources, infrastructure, and tools at the disposal of the police to suggest the way forward to enable police for efficient policing.

To bring about reform for effective functional and operational policing, the police need to be well equipped in a satisfactory working condition which can only be achieved through the process of constructive assessment of the police resources and thereby utilizing budget accordingly. Some of the resource/resource management related issue which affects policing in contemporary times are:

As of 2018, the police in India functions at almost three fourth of its sanctioned capacity.[i] The actual police strength was 198.65 police per lakh persons (as in 2018), which has improved from past years but still less than the United Nations recommended standard of 222 police per lakh persons,[ii] creating a vacancy of 5,28,165 as against the sanctioned strength of 25,95,435 at the national level.[iii] A study based on a sample survey of 11,834 police personnel across 105 locations in 21 states of India, observed that on average, police personnel works for 14 hrs a day, with about 80% of police personnel working for about more than 8 hours a day.[iv] Apropos this, three out of four police personnel believed that their workload is affecting their mental and physical health.[v] Notably, understaffing leads to overburdening of the police personals, which stands as a major reason behind the inability to secure convictions, poor supervision, and court delays, etc.[vi] 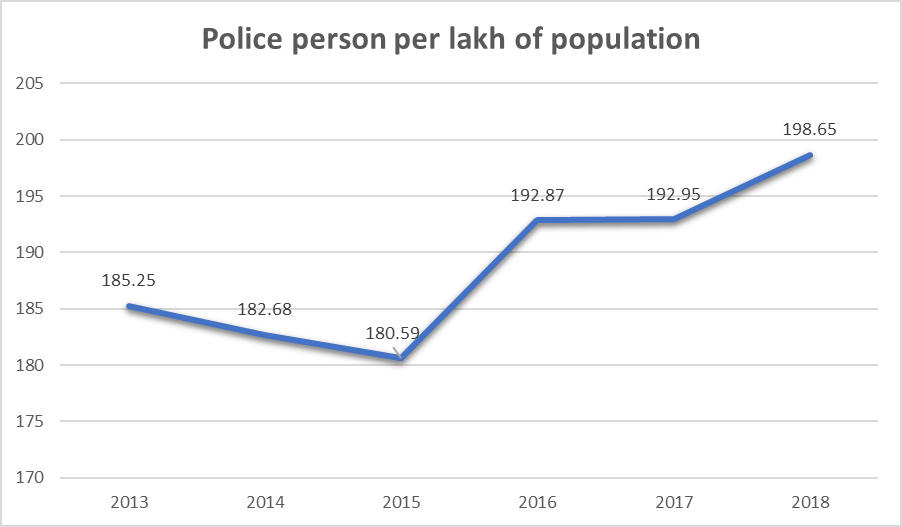 b. Want of communication means: 207 police stations in Assam are not connected to telephone line while 55 police stations in Tamil Nadu do not have an access to wireless/mobiles.[x] Though 14,937 personal computers and 2830 laptops were added in the year 2018, the level of compliance to implement Crime and Criminal Tracking Network & System (CCTNS), among 22 selected states (including UT of Delhi), which was to be achieved by 2012, till 2019, stands at [only] 78%.[xi]

c. Want of Weapons: As per the Comptroller and Auditor General's (CAG) audit in 2017, Uttar Pradesh Police is using nearly half of the weapons (48)% which are declared outdated over 20 years ago by the Home Ministry.[xiii] The CAG's report also reflects the lack of quality weapons by up-to 32% in April 2018, and the usage of phased out weaponry, in the states like Jharkhand.[xiv] As of 2015, the Rajasthan Police received only 14.7% of requisite weapons thus facing a shortage of over 85% of weapons.[xv]

India has witnessed a steady inclination in crime rate by 28% over the last decade. However, as recorded in 2015, the conviction rate is as low as 47%. In 2018, Gujarat National Law University (GNLU) conducted a study on the 'Importance of Police Accountability and its Impact on the Governance of Criminal Justice System in the State of Gujarat', involving a sample size of 469 stakeholders, where 74% of the lawyers and judges said that the main reason for the low rate of conviction is the improper and flawed investigation. Back in 2006, the directives were passed by the Hon'ble Supreme Court on police reforms in the case of Prakash Singh,[xvi] where one of the directions was to separate 'investigating police' from 'law & order police', starting with towns/ urban areas having a population of ten lakhs or more, and gradually extending to smaller towns/ urban areas too.[xvii]

It is high time to execute the court's directives as the aforementioned 2018 study in the state of Gujarat highlights that among police officers, lawyers, and judges surveyed, more than three fourth of them agreed that there should be a separate police force for crime investigation and maintenance of law and order.[xviii]

In a survey conducted by Common-Cause the top three measures suggested by police officials to ensure better functioning were (i) increasing staff and training staff, (ii) improve infrastructure/facilities, (iii) fixed working hours.[xix] Some of the immediate ways in which the desired can be achieved are:

a. Outsourcing/Redistributing non-core police functions – In India, the job of over 1 lakh police personnel is just to serve summons. The "fifth report of the Second Administrative Reform Committee" suggested redistributing non-core police functions like traffic management, disaster rescue and relief, and issuing of court summons to other agencies in a phased manner as these functions do not require any special knowledge of policing.[xx] Taking note of the same, the MHA is convincing the state governments and the UTs to outsource service of issuing summons to other government departments or by deploying private agencies like in the U.S. and the U.K.[xxi] However, it has been purported that there have been few efforts on the parts of police organizations to outsource some of its non-essential functions but the arrangement is neither encouraged by the police organization nor by the people at large.[xxii]

On a similar note, though the CCTNS project was approved by the cabinet in 2009, only two states have an implementation percentage of over 90 by 2018.[xxiii] There is an ostensible delay in the deployment of CCTNS because the police are expected to be responsible for data entry, thus, developing a set up where management professionals' work in connection with the police in issues such as data entry and managing CCTNS software may ensure maximum utilization of police officials.[xxiv]

b. Better utilization of funds – Almost all the states have underutilized the states' police budget in 2018 – 2019, the exception being, Mizoram, where the expenditure exceeded the allocated budget by 95.17 crores.[xxv] It is also pointed out that one of the reasons behind lack of basic communication infrastructure in Uttar Pradesh is its inability to utilize budget adequately by expediting the procurement of essential equipment and replacement of obsolete equipment and technologies.[xxvi] However, as depicted in the table below, of the hefty budgets, as sanctioned by the government, a meagre sum of monies are spent on the purpose defined and the result being – lack of optimum resources/ facilities for the betterment and growth of the forces as well as safety and wellness of the people.[xxvii]

[Police budget as allocated by states and Expenditure in the year 2019 | Source: BPRD]

Further, the budget allocated for the Modernization of Police Forces under the Modernization of the States Police Forces (MPF) Scheme was underutilized. In 2018 – 2019, a sum of Rs. 3,578.45 crore was utilized by states against a combined grant (central and state) of 6,558.51 crore towards modernization with Nagaland being the only state to use the grant to the optimum.[xxviii] An analysis of the data collected from the Budget Estimation, Allocation and Monitoring System (BEAMS) of the department of finance under the government of Maharashtra suggests that 'salary' is the dominant component which consumes a huge fraction of the budget and the residue is consumed for maintaining of vehicles and for petrol. There is barely any budget to advance infrastructure or to maintain technology tools, arms, and ammunition. Despite the short supply of resources, the police budget is underutilized and surrendered by the states.[xxix]

The handling of crime is directly related to numbers. The unsatisfactory numbers in resources and infrastructure strain the police which results in tawdry policing. Thus, a continuous and effective evaluation of police resources and infrastructure coupled with strategic management of budget can boost police performance which in turn may improve police-public relations.

[Authors are practicing Lawyers. Views of the author(s) are personal].

[xiii] Report No.3 of 2017 - Performance Audit of Modernization and Strengthening of Police Forces, Government of Uttar Pradesh (Dec. 27, 2020), cag.gov.in.