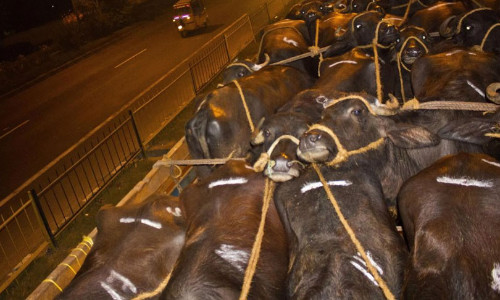 x
"The universe along with its creatures belongs to the land. No creature is superior to any other. Human beings should not be above nature. Let no one species encroach over the rights and privileges of other species."

"The universe along with its creatures belongs to the land. No creature is superior to any other. Human beings should not be above nature. Let no one species encroach over the rights and privileges of other species." Above is a quote from the Isha-Upanishads which was used in the landmark judgment of Punjab & Haryana High Court, passed on 31st May 2019, in the case titled...

"The universe along with its creatures belongs to the land. No creature is superior to any other. Human beings should not be above nature. Let no one species encroach over the rights and privileges of other species."

Above is a quote from the Isha-Upanishads which was used in the landmark judgment of Punjab & Haryana High Court, passed on 31st May 2019, in the case titled Karnail Singh and others v Stateof Haryana, where it held that from now on in the State of Haryana, all animals will be considered as "Persons" and that all citizens of Haryana will be considered as persons "In Loco Parentis" (in the place of a parent). This means that all the animals in Haryana are now considered as a juristic entity (like companies and Hindu idols) and that they will be able to secure their rights through a case brought in by any citizen, who will be acting as their guardian in place of parents.

The Hon'ble P&H HC apart from conferring animals with personhood in this judgment also passes a slew of directions for the welfare of the draught animals (buffaloes, horses, mules etc) such as ordering the State government to set up infirmaries and shelters, prescribing mandatory physical fitness licenses before loading, banning over-loading, banning use of spike sticks etc.

But before eyebrows are raised, the slippery slope argument is alluded to and the ramifications of this judgment analysed, it is necessary to understand why inanimate objects (and now animals) are granted the status of personhood. This concept of granting personhood to non-human entities like companies and idols, is a judicial invention aimed at making sure that the law keeps pace with the rapidly developing society where it is not always possible that all stakeholders in society are protected simply by laws made the legislatures for securing human welfare. So, for example, it is held by the Supreme Court of India in 1969 that a Hindu idol is a juristic person, capable of holding property and also being taxed through its Shebaits who are entrusted with the possession and management of its property. Similarly, ships are considered as a legal person for maritime purposes and Admiralty Courts.

In simpler words, by conferring personhood or the status of a juristic entity, there would be greater enforcement of the law because there is an actual person now who is being harmed and this person can then seek redressal (through their representatives). This is the exact reasoning used by the Hon'ble P&H HC in conferring animals with the person status. The judgment says that because of the ill-effects of development in society such as denuding of forests, polluting of rivers, global warming etc, the animals are having to suffer. And for the cessation of this suffering that animals will now be considered as person with the capacity to being in cases for redressal of wrongs to their rights.

Now, one may have a hundred questions popping up in his/her mind such as does this mean that one cannot eat non-vegetarian food? What about the animals being used in scientific labs for experiments? Valid questions but worries unfounded in law. This path-breaking judgment only means that yes, animals are now persons and can very well prosecute their rights in the court through their representative but the rights they can prosecute for are those that are specifically given to only animals and not the rights given to humans. Being person is mistakenly considered the sole privilege of humans alone when that is not the case and nor should it be. So for example in the case of an animal being cruelly beaten, the relevant law would be section 11 of the Prevention of Cruelty to Animals Act, 1960 and not Grievous hurt as defined in section 320 in the Indian Penal Code, 1860. Furthermore, to allay any apprehensions about "personhood" - the very same PCA Act 1960 specifically allows the killing of animals for the purposes of human consumption and laboratory experiments.

This movement of granting personhood to animals is not without parallels. For example in November 2016, a Judge in Argentina, granted personhood on a chimpanzee named Cecilia who had spent many years secluded in a zoo cage and ordered that she be transferred to the Great Ape Project's sanctuary in Brazil. Similar movement has been spearheaded in the United States by the Nonhuman Rights Project founded by Steven M. Wise, who have sought to have captive and exploited elephants be declared as persons and released from the cruel travelling circuses they perform in.

This judgment is truly a pioneering and in the same vein of the jurisprudence as enunciated in landmark Supreme Court cases such as T.N.Godavarman Thirumulpad (2005), where it was held that we should now more move from the anthropocentric (human-centric) approach to eco-centric approach and the famous A. Nagaraja judgment of 2014 where Jallikattu was banned and held that animals also have right to life under Article 21 of the Constitution. One only hopes that when the appeal is heard against this judgment in the Supreme Court of India, that its validity is upheld and that the SC enlarges its scope for the entire animal kingdom of India. That would go a long way in realising the values of Ahimsa, a principle on which this nation was founded upon.

Siddhartha K Garg is an Advocate in the Supreme Court of India and a Junior to Prashant Bhushan. Siddhartha has appeared in matters such as the Jallikattu case and the All-India Stray Dogs case and also runs an animal rights NGO in Delhi called Angel Trust.