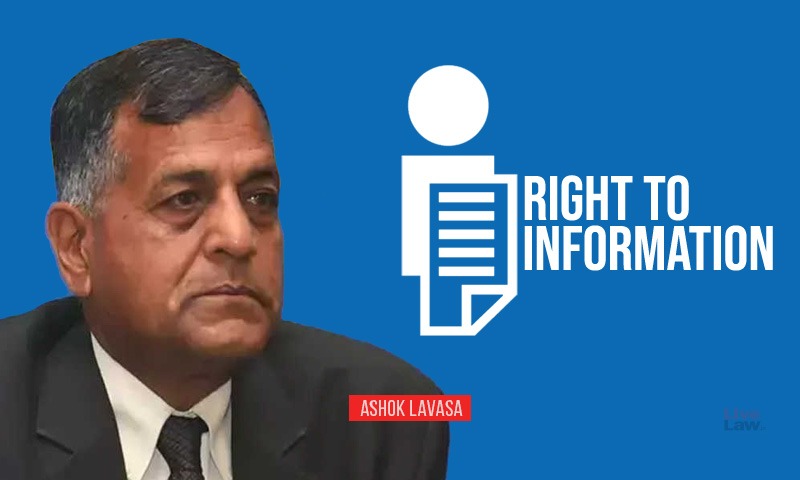 Access to information is key to a participatory democracy which enables citizens to actively participate in matters of public affairs. Enactment of RTI Act shattered the entrenched culture of secrecy carried out by our bureaucracy for years and marked a transformation into an era of transparency. Since then, we have witnessed a number of success stories of RTI empowering people at...

Access to information is key to a participatory democracy which enables citizens to actively participate in matters of public affairs. Enactment of RTI Act shattered the entrenched culture of secrecy carried out by our bureaucracy for years and marked a transformation into an era of transparency. Since then, we have witnessed a number of success stories of RTI empowering people at the grass-root level and fixing accountability of public functionaries. Recently the Central Information Commission (CIC), refused to grant relief to an appellant seeking disclosure of the "certified copy" of dissent expressed by former Election Commissioner Ashok Lavasa. CIC is a statutory body constituted under the Act to review the orders made by a public authority in response to an RTI application.

Before moving ahead, let me provide a brief as to how the matter reached before the CIC. The Election Commission of India (ECI) gave a clean chit to the Prime Minister Narendra Modi and the then BJP chief Amit Shah for alleged violation of Model Code of Conduct in the parliamentary election 2019. Lavasa dissented with the Majority opinion on five occasions. In a very surprising move, the commission did not incorporate dissenting opinions in its order. Dr Jasdeepak Singh filed an RTI application before ECI seeking "certified copy" of the dissent expressed by Lavasa. On refusal by the ECI to disclose information, the applicant filed First Appeal and subsequently the second appeal before the CIC. The Election Commission, earlier in its written submission before the CIC, raised two major objections against the disclosure of the requested information.

Firstly, information applied for contains extensive references to inputs received by the ECI from field officers including the identity of such officers. Any disclosure of aforesaid poses a certain risk to the safety of such officers.

Secondly, the information sought for by the Appellant and the inputs relied therein upon is in aid of law enforcement which is confidential in nature. CIC agreed with the view of ECI and ruled to withhold information invoking section 8(1) (g) of the Act.

The information withheld by a public authority must pass the "exemption test" in order to be exempted from disclosure. Exemption test is inbuilt under the section 8, 9 and 10 of the Act. Public authority can deny information which falls under the grounds mentioned under section 8 and 9. An authority may face a situation where a record/document contains the exempted information along with the information which can be legally disclosed. To deal with such situation, the Act has incorporated the "rule of severability" under section 10. The rule is applied to grant access to that part of the record which does not contain the exempted information and can reasonably be served from any record that contains such information. Furthermore, Information that cannot be denied to Parliament or a state legislature shall not be denied to any citizen as provide under the proviso of section 8.

Coming to the first objection raised by ECI, severability rule under section 10 is meant to deal with the very objections as raised here. In several decisions, the Supreme Court has applied the rule of severability and ordered the public authority to sever the content of the record that falls under the exempted category and disclose the remaining content.

The most celebrated one is the Central Board of Secondary Education v Aditya Bandopadhyay. A situation similar to ECI came before the Delhi High court in the case of UPSC v GS Sandhu where petitioner contended that requested information contains the name of few individuals and there is a possibility of such individuals being targeted, harassed and even intimidated. The court did not agree and ruled that denying the notings altogether would not be justified when the intended objective can be fully achieved by adopting safeguards such as blocking the name, designation or any other indication which would disclose or tend to disclose the identity.

In the present case, it was a legal obligation on part of CIC to apply the rule of severability when it has made a decision that information is exempted from disclosure under sec 8(1) (g). The order passed by CIC does not contain any discussion on the application of the severability rule. It failed to pass a legally sound order by allowing to disclose the information, severing the names of the field officer/source of the information, in compliance with the rule of severability. Withholding the whole of the record containing "opinion" expressed by Lavasa on mere apprehension pushed by the ECI casts doubt over the role of CIC to implement the act with letter and spirit.

Coming to the second objection raised by the ECI that information sought is in aid of law enforcement and confidential in nature. The RTI Act does not permit extraneous considerations such as "confidentiality" to deny information. Withholding information solely on the basis of the nature of documents as prescribed by the public authority is not consistent with the exemption test. The conclusion of PIO that certain documents are confidential and hence cannot be disclosed should pass the test of exemption under the Act. PIO is reasonably required to show how it falls under the exemption that makes it confidential.

Lavasa is a public functionary vested with constitutional power to ensure a free and fair election. Labelling his opinion as confidential is not in compliance with the statutory provisions and spirit of exemption test. Supreme Court has brilliantly observed the relationship between the confidentiality and disclosure of information in its recent case of Central Public Information Officer,Supreme Court of India v Subhash Chandra Agarwal as follows :

The disclosure does not undermine public interest here. It serves the public interest by promoting free and open discussion on a matter concerning "free and fair election". In a constitutional democracy, the free and fair election is the cornerstone of electoral politics. And voters' right to know is inseparable from free and fair elections. Opinions expressed by the Commission on a complaint of the violation of election code/election laws are subject to disclosure under the Act as there exists a strong public interest to ensure free, fair and transparent election. Justice Mathew's remarkable words, in the Supreme Court case of State of UP v Raj Narain, advocating the right to information of the conduct of public functionaries should be noted here. He said "the people of this country have a right to know every public act, everything that is done in a public way by their public functionaries. They are entitled to know the particulars of every public transaction in all its bearing." Depriving voter's right to know by withholding such information paralyzes the purity of the electoral system. Public interest demands disclosure of dissent expressed by Lavasa in order to maintain the institutional integrity of the ECI and sanctity of the electoral process.

It is imperative on part of CIC, an adjudicatory body performing quasi-judicial functions, to pass a reasoned and speaking order. Application of mind and passing of reasoned orders are inbuilt into the scheme of the RTI Act. Justice Ravinder Bhat, while dealing with sec 8(1) (h) and other similar exemptions in Bhagat Singh v CIC, noted the authority withholding information must show satisfactory reasons…... Such reasons should be germane, reasonable and based on some material. The mere existence of a particular exemption clause under section act is not sufficient to withhold information, there should be a reasonable nexus between the exemption clause cited to withhold information and the objective sought to be achieved by withholding it.

The order passed is bereft of reasons and without consideration of proper material facts. The objections of ECI that disclosure of the information requested would endanger the life and physical safety, such presumption should be based on a reasonable probability and not on mere perception or assumption. CIC, in its order, fails to satisfy what constitutes the reasonable probability that could endanger the life and physical safety of field officers. Furthermore, the order passed by CIC has made a brief analysis of ECI objections. At the same time, it does not even record the arguments of the appellant.

CIC is duty-bound to uphold, promote and educate RTI.

CIC is mandated to uphold the vision of transparent and accountable functioning of public authority. India's RTI Act is counted amongst the best RTI laws across the globe. However, its poor implementation in recent years is a matter of concern. CIC has always been seen as a guardian of RTI Act entrusted with a legal duty to enforce it without fear and favour. We do not expect it to act as a 'rubber stamp' institution to approve the view of political executives instead of demanding transparency and accountability. The Act would be meaningless and it would be reduced into mere pieces of paper if people, conferred power to implement it in letter and spirit, failed to uphold the idea of access to information, transparency and accountability. As visionary Dr Ambedkar pointed out, "However good a constitution maybe if those who are implementing it are not good, it will prove to be bad. However bad a constitution maybe, if those implementing it are good, it will prove to be good".

(I would like to convey my gratitude to Venkatesh Nayak, Coordinator of Access to Information Program at Commonwealth Human Rights Initiative, for his feedback)