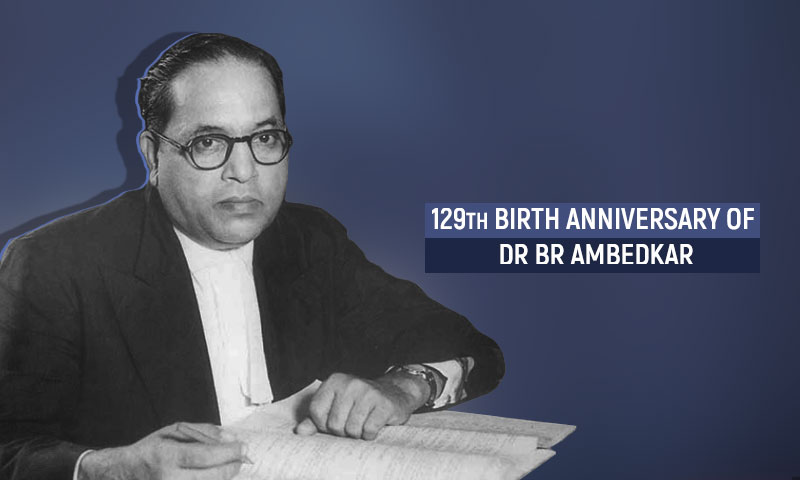 According to Mahabharath, the epic puran of Sage Vyasa, Karn has born with natural steel shield over his chest called Sahaj Kavach. It was believed to have been given by Sun God. Babasaheb Dr Bheemrao Ramji Ambedkar has given to entire Indians, then, now and in coming times, a great protective shield – Samvidhan Kavach, which empowers them and secures their lives and rights. He...

According to Mahabharath, the epic puran of Sage Vyasa, Karn has born with natural steel shield over his chest called Sahaj Kavach. It was believed to have been given by Sun God. Babasaheb Dr Bheemrao Ramji Ambedkar has given to entire Indians, then, now and in coming times, a great protective shield – Samvidhan Kavach, which empowers them and secures their lives and rights. He is the Sun, without whom the dictatorial democratic despots would have eaten away those rights and rights-holding-people. Ambedkar is Koti Surya Samaprabha = equal to a crore of Suns'

But Karn has lost his life in spite of such natural shield, because he supported a despot who does not follow Raja Dharma, the then Constitution of Bharath. Karn stood by Duryodhan who got pulled his sister in law by hair to an august Assembly of Royal Members in office disrobed them and dishonoured her.

If the vibrant citizens protected by Ambedkar's Samvidhan Kavach, honour the Constitution of India, the Samvidhan shall protect them.

Yes. Ambedkar's Jayanti arrived again. Now we will find rulers publishing the colorful photographs of themselves along with beautiful quotations of Ambedkar paying tributes and lakhs of rupees to news media for advertisements. It is amusing to see the leaders looking into the camera while garlanding the statues of Ambedkar holding the Constitution, which they never see or open to follow.

Every year we observe Jayanti and Vardhanti of Ambedkar, but never try to read how his Constitutional morality has been violated in between two Jayanti days. Born 129 years ago on 14th April and died 64 years ago, Ambedkar strongly desired constitutional governance in India which gained independence after centuries of slavery caused by treachery, inertia, religious hate and disunity. He was worried and wanted Indians not to lose it again. His words are worth remembering on his birthday. Ambedkar said on November 25, 1949 in Constituent Assembly after completing the process of crafting the Indian Constitution:

In the invasion of Sindh by Mahommed-Bin-Kasim, the military commanders of King Dahar accepted bribes from the agents of Mahommed-Bin-Kasim and refused to fight on the side of their King. It was Jaichand who invited Mahommed Gohri to invade India and fight against Prithvi Raj and promised him the help of himself and the Solanki Kings. When Shivaji was fighting for the liberation of Hindus, the other Maratha noblemen and the Rajput Kings were fighting the battle on the side of Moghul Emperors. When the British were trying to destroy the Sikh Rulers, Gulab Singh, their principal commander sat silent and did not help to save the Sikh Kingdom. In 1857, when a large part of India had declared a war of independence against the British, the Sikhs stood and watched the event as silent spectators.

Will history repeat itself? It is this thought which fills me with anxiety. This anxiety is deepened by the realisation of the fact that in addition to our old enemies in the form of castes and creeds we are going to have many political parties with diverse and opposing political creeds. Will Indians place the country above their creed or will they place creed above country? I do not know. But this much is certain that if the parties place creed above country, our independence will be put in jeopardy a second time and probably be lost for ever. This eventuality we must all resolutely guard against. We must be determined to defend our independence with the last drop of our blood.

On the 26th of January 1950, India would be a democratic country in the sense that India from that day would have a government of the people, by the people and for the people. The same thought comes to my mind. What would happen to her democratic Constitution? Will she be able to maintain it or will she lose it again? This is the second thought that comes to my mind and makes me as anxious as the first.

Ambedkar has two serious questions: Will India remain independent and could Indians protect their democracy?

He gave three warnings to Indians if they want to retain democracy and independence of the nation.

1. He wanted us to hold stead fast the Constitutional methods of achieving our social and economic objectives.

2. Not to lay our liberties at the feet of even a great man, or to trust him with power which enable him to subvert their institutions. In politics Bhakti or hero-worship is a sure road to degradation and to eventual dictatorship.

These warnings are given to the people, who are supposed to behave responsible. Ambedkar gave another message to both the rulers and the people also. That is:

Ambedkar was anxious and worried about graded inequality as some have immense wealth as against many who live in abject poverty.

Situation did not change even 71 years after Ambedkar made that statement. The Constitution of India, the bulkiest in the world did not remain same, as 395 Articles grew to 450 plus Articles, and 12 schedules with 104 amendments. The shape of fundamental rights, federalism and judicial review has been changed. Right to property diminished from fundamental rights, directive principle of state policy to give primary education to all got converted into fundamental right with Article 21A. Right to information is added to empower citizens; but diluted in 2019 only to deprive the Commissions of their independence.

Judicial review power has been expanded to examine the material that formed decisions by the Governors and President and the power of Parliament to amend the Constitution has been diminished by 'basic structure doctrine' introduced by Supreme Court in Keshavananda Bharti case. But the Constitutional provisions relating to Article 367 and 370 are altered by Presidential Orders in 2019.

Anti-defection law is added only to be breached by every political party in power. MLAs are purchased, stored or stocked in five-star-hotels so that they can straight be taken with full honours into Assembly for voting to topple the governments.

Independence of the Judiciary suffers from luring of justices with post-retirement positions including the Membership in Parliament and Governorships.

Rigour of rule of locus standi was relaxed to hear public interest litigation by non-affected parties to give justice to people in general. However, the justice in Constitutional courts became costly and inaccessible. The remedy in lower courts is suffering with delay and cantankerous appeals suppressing the poor. Criminal justice is available to those who press the lawyers with high face value and common man, even if had case value, would lose and sometimes hangs on to gallows because he cannot afford a lawyer who can convince the court.

Freedom of speech and expression is expanded by leaps and bounds by electronic and social media but fake news breaks back bone of objective news supposed to break on 24/7 channels. Citizens criticising the police or ruling party will be accused of sedition, whether they are pump operators or schoolteachers. A politician initiates prosecution for criminal defamation against another politician for his criticism or a complainant is dragged to court for alleging sexual harassment. Journalists face multi-hundred crore civil defamation cases for critically analysing the corporate activities with huge constitutional concessions granted by democratic rulers.

The privacy has been recognized as a new fundamental right, left undefined in confusions and uncertainties. And within it the privacy contains a hidden assault on freedom of speech and right to information. Government takes all private information of people through Adhaar and protects information about official misconduct of public officials under privacy clauses, which find judicial endorsement.

National Emergency is en bloc opposed for its atrocities on liberties, but when a whole state of Jammu and Kashmir goes into lock out and internet block out for more than eight months without any remedy, the benevolent judiciary finds time to hear only some pleas while others wait for long time in undeclared emergency.

After seventy years of independent citizenship in their own country the people are pushed into a doubtful situation where they burdened with proving their Indian citizenship. If they fail to prove their parents' place and date of birth being in India, they might face the danger of being branded as foreigners and if their lawyer friends fail to prove their citizenship, they will end up in detention centres to reach their 'own' country, which neither they nor the Government knows. Several citizens who criticised it are facing sedition charges. The exercise was about to be started on April 1, thanks to Coronavirus Covid 19, the treatment to the doubtful citizenship disease is postponed.

The essence of the Constitution introduced as 'brief' introduction in the form of Preamble was totally forgotten by rulers but suddenly it became a form of protest so that people can read it in public places and take oath to protect it for the first time after 1950. Courts are real guardians of peoples' right and it is because of the courts of justice, reading of preamble is not considered sedition.

Constitutional governance began with land reforms but ultimately people lost their right to property from Article 19. They lost it even as livelihood while corporates started acquiring thousands of acres from state, which were forcefully taken from poor and middle-class people for 'public purpose'. The new Land acquisition law which is supposed to protect them from total deprivation of land is bypassed by State Governments in the name of land-pooling, actually fooling the small farmers. The State and Estates are more interested in real estate while fourth estate is not logging behind.

Finally, the donations to political parties can be made by unknown corporates from their black money coffers through electoral bonds, which are nothing but a new currency of Rs. Crores that can by realized by political parties. It is called a transparent policy. People lost their five-hundred and thousand-rupee-notes in demonetization only to be replaced by 2000-rupee notes and crores worth electoral bonds. The criminals are invited with red carpet into political parties and standing counsels for state will defend them in courts as most of them have occupied the public offices.

The NGOs and independent institutions including educational institutions should study the instances of breaches of Constitutional provisions between last Ambedkar Birthday to this year's anniversary, to pay real tributes to the founder of the Constitution of India. Let the Constitution given by Son (read Sun) of India protect every sincere Indian as strong Samvidhan Kavach.