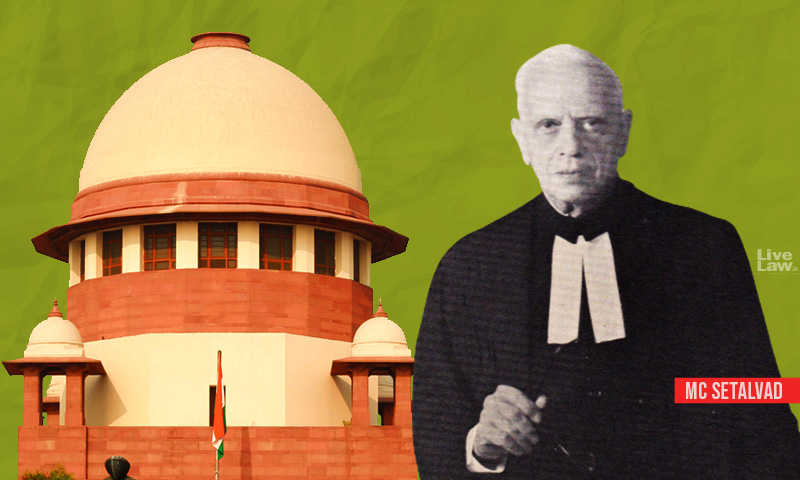 In a discussion over the greatest lawyers India has produced, the name of Motilal C. Setalvad cannot be left out. The stature and brilliance of this man, is evident from the title 'Mr. Law' as he was popularly called. Today, marks the 135th birth anniversary of Shri Setalvad and this post tries to pay a tribute to him by highlighting the significant events of his life and legal career....

In a discussion over the greatest lawyers India has produced, the name of Motilal C. Setalvad cannot be left out. The stature and brilliance of this man, is evident from the title 'Mr. Law' as he was popularly called. Today, marks the 135th birth anniversary of Shri Setalvad and this post tries to pay a tribute to him by highlighting the significant events of his life and legal career. At the outset, I wish to apologise if this post is underinclusive and leaves out some vital aspects about his life. I believe words are not enough to encapsulate completely, the life led by him.

Origins and the Bombay Bar:

Shri Setalvad completed his legal education in Bombay and was a product of the prestigious Bombay Bar. He was an extremely naughty student in law school and was famous for giving proxy attendance for his friends. When asked for justification, he would blame it on 'the poor quality of lectures, which he and his friends were compelled to listen to'.

Confused between the choice of being a solicitor and an advocate (former only prepares and briefs a lawyer, whereas the latter argues), he decided to chose the latter. At the time, enrolment as an advocate was an extremely arduous and a tough process. For instance, one had to mandatorily attend Court for two years (this was verified by the Court Registrar every morning) and thereafter, clear an examination which was adjudged by a sitting Judge, state's Advocate General and a Government Pleader.

Appointment as the Attorney General:

Shri Setalvad has the distinction of being the first occupant of two key government offices i.e. Attorney General for India ("AG" i.e. the premier law officer of the country) and Chairman of the Law Commission. While he did exceptional work in both these offices, his tenure as the AG stands out.

Shortly before the adoption of the Constitution, Setalvad was informed by Law Secretary K. Sundaram, that the government had decided to recommend his name as the AG. Setalvad was initially reluctant to accept the position, given that it would require him to leave Bombay. Reluctantly, he accepted the position but informed the Secretary, that he intended to return to Bombay in a year or two. As fate would have it, Setalvad continued to occupy that office, for over 13 years.

As the first AG for independent India, Setalvad appeared in several landmark constitutional cases, namely State of West Bengal v. Anwar Ali Sarkar, Chiranjitlal Chaudhary v. Union of India, State of Bombay v. RMD Chamarbaghwala, In Re the Berubari Union etc. Rather than elaborating upon his legal acumen and eruditeness as the law officer in these cases, I would focus on highlighting his character as an AG.

Often law officers are attacked and criticised for toeing the government line and not standing up, where the government's stand goes against basic conscience and law. For instance, AG Niren De was heavily criticised for his hard-line arguments in the infamous ADM Jabalpur case (I have discussed the case here). However, Setalvad was an exception and always spoke his mind.

For instance, he openly admitted that the decision in AK Gopalan v. State of Madras, AIR 1950 SC 27 (wherein the Court had held in his favour, that Article 21 only guaranteed procedural due process and hence, the government could detain an individual so long as the detention was backed by a law) was wrong and had completely obliterated the safeguard to personal liberty. Similarly, Setalvad turned down the Deputy Minister of Law's request to appear in the Nanavati case before the Supreme Court, stating that he would be embarrassed to do so, given the political manoeuvring happening behind the scenes.

There were consequences to Setalvad's actions and it is believed that Law Minister Sen often brought them up with Nehru. However, it seems for Setalvad, his morals and conscience mattered more than his office.

Exit as the AG:

Despite having a remarkable career as the AG, Setalvad's exist was distasteful in his own words. Setalvad in his autobiography recalls, that in the summer of the year 1962, he had informed PM Nehru that he was desirous of stepping down as the AG. There are many reasons attributed to this decision but the strongest is considered to be the ambitions of Law Minster Sen, to the dislike of Setalvad.

The story goes that Law Minister Ashok Sen was planning to combine the Law Ministership with the office of the AG, with him being the occupant. In fact, the government had circulated a pamphlet titled 'A Study of the History, Nature and Working of the office of the Attorney General' in favour of this idea. The proposal was severely criticised particularly on the ground that the AG was the head of the Bar Council of India and having the Law Minister (a ruling party man) occupy that position would hamper the body's independent status.

The proposal was ultimately dropped and subsequently, a cartoon was carried out in the weekly magazine Shankar wherein the office of the AG was depicted as a bunch of grapes hanging in a tree and law minister was depicted as a fox, trying to catch it but failing every time. The caption was 'Law Minister drops to be AG, grapes are sometime sour.'

Setalvad believed that despite rendering his services to the nation for 13 years, he did not receive a word of recognition or appreciation.

I have often wondered how Setalvad got the name 'Mr. Law'. While I cannot point to a particular incident behind the name's origin, I can highlight one that justifies the title.

This incident was narrated by Shri Fali Nariman in his autobiography 'Before Memory Fades'. Fali writes that he was one of the advocates in the famous case of St. Xavier College (concerning the rights of minority groups to establish and administer educational institutions) and he argued the case at length for hours. Setalvad was appearing in the case on behalf of the intervenors. Unlike the other advocates who argued for hours, Setalvad on his turn, got up and all he said was,

'My Lords, the doubts raised by the ASG have been adequately answered by my friends Mr. Palkhivala and Anthony. But I would submit that the doubts were resolved long ago in the judgment of CJI Das.'

Thereafter, with one hand in his pocket, he looked at each of the 9 Judges and said, 'now are there any questions that I have to answer? Are there any doubts left in the mind of any of your lordships for me to dispel?'

Nariman recalls that to his mortification, not one of the Judges had the temerity or inclination to ask him a single question. Further, the whole edifice of his carefully prepared argument had been demolished in one single stroke, by the sheer force of a great advocate's personality.

While I was not there in person to witness his argumentation in Court, his stories continue to inspire many like me. It teaches us the value of hard work, sincerity, and most importantly that nothing is as important as one's ethics and the greater good. Nariman in a fitting tribute to Setalvad, had once remarked that 'Old soldiers never die. They only fade away. Grand old men only die but they never fade away.' I could not agree more.

± The article was first published on the author's personal blog "The Basic Structure". The author does not wish to offend any member of the legal fraternity with this post. The facts stated in the article have been reported in the public domain.