Reservation And Common Perception: Responding To A Student 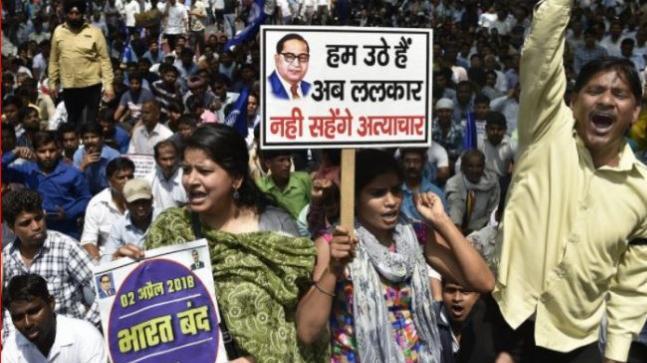 x
From 2018 Bharat Bandh by Dalit organizations (PTI)
An attempt to clarify some common misconceptions in respect of the law and policy of reservations.

On 29 April, 2020 my article titled "Fallacy of Supreme Court's Concern over Revision of Reservation Lists" was published at Live-Law. After a few days, one of my ex-students called me to share his dissent with my article. Having talked to him, I realised that there are few very common misconceptions and questions in respect of the law and policy of reservation, which hardly get clarified and answered. Consequently, it adds fuel to the prevalent agitation against not just the idea of reservation but those who avail the benefit of it. Therefore, I feel myself compelled to discuss few of the common concerns and questions about the reservation raised by him. In my replies, I would prefer not to confine myself to the discussion with him.

Q 1. After getting admission in a higher educational institution every student, whether belonging to a reserved category or unreserved, gets similar access to classes, library, teachers, labs etc. Despite this, why a reserved category candidate is entitled to the benefit of reservation while applying for a job?

A. I want to reply to this question in two ways, one as a law-teacher, the other as just a teacher. As a law-teacher, I would like to remind you the very purpose of reservation. According to Article 16(4) of the Constitution, reservation is provided to the backward classes for ensuring their "adequate representation" in the government services, or for "sharing of state power" as observed in the Indra Sawhney judgment, 1992(para 27). Adequate representation was necessary because, as noted by the members before the Constituent Assembly, the interview boards consisted of the so-called upper-caste officers only. They did not select candidates belonging to Harijan community and other Scheduled Castes (per R. M. Nalavade, H. J. Khandekar).

The next obvious question may be, whether adequate representation has not been achieved so far in the last 70 years. No, of course not. In fact, there are several prominent public institutions/ services wherein you will hardly find an official from reserved categories, especially in top ranks. I have already discussed this issue in my earlier article.

In my reply as a teacher, I want to share my experience. I always find some students in the class, who would prefer to occupy the benches in the backside; remain silent; hesitate to question and answer; and ask questions outside the class. For most of them, it is not a personality defect, but their social and educational backwardness due to their castes. To them, providing similar infrastructure may not be enough.

Q 2. But isn't it unfair that despite studying together in the same institution, one gets a job due to reservation, whereas the other doesn't? Merit is also compromised under reservation.

A. Dalits also ask the same question of fairness in the context of the "caste apartheid" they have been facing for centuries to the extent that it has been internalised. In India Sawhney the bench observed that Article 16(4) was incorporated for the purpose of "empowerment of those groups and classes which have been kept out of the administration— classes which have suffered historic disabilities arising from discrimination or disadvantage or both" (para 64, emphasis supplied). Admitting the inhuman situation, the nine-judge bench further said that "The Shudras, the Scheduled Castes and the Scheduled Tribes … had practically no entry into the administrative apparatus" (para 85). Reservation is an attempt to eradicate the long-standing inequality. Therefore, any argument of "fairness" in selection looks too strange.

In respect of your logic of merit, I would like to again quote from the Indra Sawhney judgment that "It cannot also be ignored that the very idea of reservation implies selection of a less meritorious person. At the same time, we recognise that this much cost has to be paid, if the constitutional promise of social justice is to be redeemed" (para 111, emphasis added). Moreover, post-appointment training for the candidates of reserved categories is the best answer to the question of merit.

I appreciate that on the issue of merit you were unhappy with the private educational institutions because many of them compromise with the minimum eligibility criteria while admitting students in a professional course.

A. Caste-based discrimination is still continuing mainly because reservation has not been implemented in its letter and spirit; SCs and STs are hardly represented in higher posts and policy-making departments; upper-caste monopoly in public services still continues; for recommendation-based posts dalits' names are barely suggested; attempts to dilute reservation have gained momentum; and the higher castes' attitude towards dalits has not changed. Consequently, social, educational and economic conditions of the disadvantaged sections have not improved much. Thus, they easily fall prey to caste-based discrimination. Therefore, reservation is a strong measure to counter discrimination because it acts as a deterrent to the upper-caste monopoly.

Q 4. Why reservation should not be permitted on the ground of economic backwardness?

A. While arguing in favour of reservation to the economically weaker class, we often misconceive the idea of reservation as proposed in the Constituent Assembly. Reservation was provided for because candidates belonging to the depressed classes were not selected in state services. The reason for the rejection was neither lack of qualification nor economic status, but their caste and the stigma of "untouchability" attached to it. Consequently, their share in the public services was almost nil. On the other hand, the poor candidates from the higher castes did not face such a "disqualification" and inadequate representation. It may be possible to eradicate poverty with the help of welfare policies, however, representation in state services cannot be achieved without reservation.

Q 5. Isn't a poor candidate belonging to a higher caste equally vulnerable as a dalit?

A. In the hierarchical Indian society based on Varna system, it is unrealistic to put forward this proposition. Actually, members of upper castes, even if poor, enjoy a rich "social capital" in the form of their higher caste, consequent higher social status and relations, rich history, respect, dominance in the society, representation in the government services and political executives etc. On the contrary, the "legacy" of dalit displays discrimination, backwardness, oppression, untouchability and rejection. In such a situation, poverty makes a dalit even more vulnerable.

Let us pause the discussion, with the following insightful observation from the Kaka Kalelkar Commission's Report, cited in Indra Sawhney (para 13):

"The real triumph of the caste system lies not in upholding the supremacy of the Brahmin, but in conditioning the consciousness of the lower castes in accepting their inferior status in the ritual hierarchy as a part of the natural order of things … It was through an elaborate, complex and subtle scheme of scripture, mythology and ritual that Brahminism succeeded in investing the caste system with a moral authority…"

Thank you Prateek, for invoking some of the very fundamental issues relating to reservation.

Kailash Jeenger is the Assistant professor at Campus Law Centre, Faculty of Law, University of Delhi. Views are personal.