SC During COVID-19 Lockdown : Is This The Next ADM Jabalpur Moment? 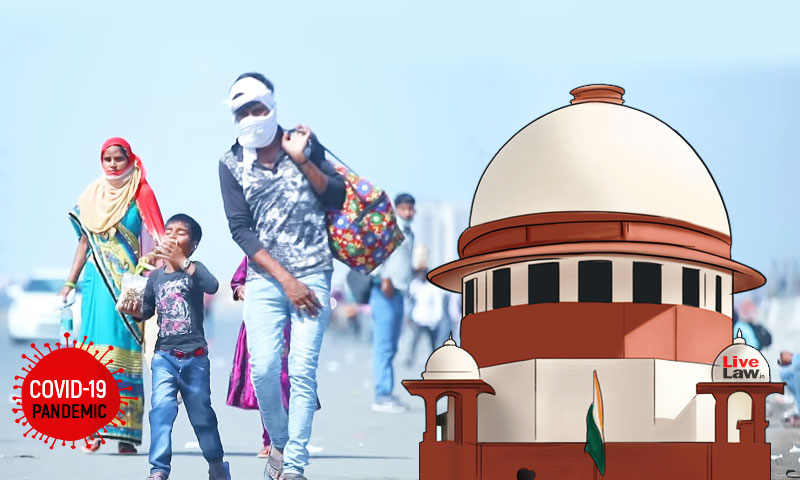 x
If court fails in protecting and enforcing the fundamental rights of citizens in this time of crisis, history will not be too kind to it.
Your free access to Live Law has expired
To read the article, get a premium account.

The Covid 19 pandemic and the response of the governments has been and will be subject to much scrutiny and debate for a long time to come by socio-economic, political science and legal scholars. What I am interested as a lawyer is to analyse the response of the higher Courts in our country.

Chief Justice William H Rehnquist[2] of the US Supreme Court while speaking at a conference said:

"The courts, for their part, have largely reserved the decisions favouring civil liberties in wartime to be handed down after the war is over … To lawyers and judges, this may seem a thoroughly undesirable state of affairs, but in the greater scheme of things it may be best for all concerned… While we would not want to subscribe to the full sweep of the Latin maxim – Inter Arma Silent Leges – in time of war the laws are silent, perhaps we can accept the proposition that though the laws are not silent in wartime, they speak with a muted voice"

Professor David Cole, one of the foremost voices advocating Civil Liberties and National Legal Director of American Civil Liberties Union (ACLU) had argued that "Courts, like every other institution of human governance, are imperfect. Tasked with the job of enforcing individual constitutional rights against the majority's will, judges remain prone to the same fears and anxieties that afflict us all during times of crisis. Thus, it should not be a surprise that courts have all too often deferred to unfounded assertions of government power on issues of national security; when the executive claims that the fate of the nation is at stake, it takes real courage to stand up to that assertion and subject"[3]. Having said that, he further argues that over a period of time the Courts played a very valuable role, but after the emergency ceases, in reviewing and restraining the executive from committing egregious violations of rights of individuals. At least future emergencies were addressed.

A very famous example of 'hindsight wisdom' by the courts, in the UK, is the case of Liversidge[4]. Lord Atkin had provided a very powerful dissent in this case which was accepted as the correct view much later. Liversidge dealt with the court's duty to examine the order of a high-ranking executive to detain. The detention order of the alleged German alien was passed at a time when England was at war with Germany. Lord Atkin disagreed with the majority view that the subjective satisfaction of the executive could not be judicially reviewed. Few years thereafter, in Nakkuda Ali[5] the Privy Council dealing with a Ceylon statute held that "reasonable grounds to believe" defined a judicial standard and required that the court be satisfied that reasonable grounds did actually exist. Still later in the celebrated case of Ridge vs. Baldwin[6], Lord Reid of the House of Lords opined that Liversidge was a peculiar decision. Finally, Liversidge view was repudiated in Rossminster[7].

In the United States there are few examples that come to mind immediately viz., the cases of Korematsu[8], Dredd Scott[9] and Plessy[10]. American scholars met and discussed some of what they termed as the worst decisions of the United States Supreme Court and had this to say[11]:

"One of the worst aspects of American history is that at times of crisis we compromise our most basic constitutional rights, and only in hindsight do we recognize that it didn't make us safer," said Erwin Chemerinsky, from the University of California Irvine. To put that in context, the Dred Scott decision said that the descendants of slaves weren't entitled to protection by the Constitution. The Plessy decision established the "separate but equal" rule that allowed segregation to continue for decades.

In India, when we refer to a decision rendered during a crisis what immediately comes to our mind is the controversial judgment of ADM Jabalpur[12], passed during the times of Internal Emergency in India. The Supreme Court of India overturned this judgment nearly 4 ½ decades later. The Court held that the judgement of ADM Jabalpur was an aberration in the constitutional jurisprudence of the country and that the judgement be buried ten fathoms deep with no chance of resurrection[13]. The Court had this to say about ADM Jabalpur:

"When histories of nations are written and critiqued, there are judicial decisions at the forefront of liberty. Yet others have to be consigned to the archives, reflective of what was, but should never have been. The decision of the US Supreme Court in Buck v Bell ranks amongst the latter. It was a decision in which Justice Oliver Wendell Holmes Jr. accepted the forcible sterilization by tubular ligation of Carrie Bucks as part of a programme of state sponsored eugenic sterilization. Justice Holmes, while upholding the programme opined that: "three generations of imbeciles is enough". In the same vein was the decision of the US Supreme Court in Korematsu v United States, upholding the imprisonment of a citizen in a concentration camp solely because of his Japanese ancestry. ADM Jabalpur must be and is accordingly overruled."

A controversial judgment pronounced during internal emergency was criticised and laid to rest. In the aftermath of the said judgment, but yet again, only after the emergency was lifted, the Supreme Court devised Public Interest Litigations to call upon the inactive executive and even at time nudge the legislature into making policies that protected undertrials, working women, the marginalised and the environment. The Supreme Court even used Public Interest Litigations to call the executive to account in matters of corruption, lackadaisical investigations and electoral reforms. It appeared that the Supreme Court was leading the citizenry in demanding transparency and accountability in governance.

The Covid 19 crisis has in my view however bared the soft underbelly of an otherwise very strong Supreme Court - a Court that was able to strike down a Constitutional amendment regarding the procedure for appointment of Judges to the higher judiciary; a Court that was able to set aside allocation of 2 G telecom Licenses by the Government on the alleged grounds of corruption and procedural irregularities; a Court that set up and monitored Special Investigation Teams to investigate into financial irregularities and stashing of funds outside India and to investigate into atrocities and riots in various parts of the country; a Court that directed the executive to take steps to even link rivers across the country. So much so, the court was subjected to criticism from few scholars that it had started judicial legislation.

Of late the Court has suddenly become reticent. The Supreme Court was reluctant to come to the aid of thousands of migrant labourers who were stranded in various parts of the country. When this was brought to the notice of the Court, it expressed reluctance to seek any report regarding the plight and fate of these thousands of helpless citizens. First, it simply took note of a statement made by the Solicitor General that there were no migrants on the road and closed the matter. Later when the matter was sought to be urged again, the Court closed it by simply stating that the petitions were based on newspaper reports and could not be acted on and left it for the respective States to handle the crisis regarding migrant labourers.[14] Many High Courts however exercised their powers under Art.226 of the Constitution and issued various directions to the executive of the Union and States, seeing the plight of the thousands of migrant labourers. It will be interesting to see what the Union would do as regards these directions. If the matter is taken up to the Supreme Court, will it be another ADM Jabalpur moment that the Court will face?

Another example that needs to be highlighted is the manner in which the court dealt with non-availability of 4G internet connection in the erstwhile State of Jammu & Kashmir. Recently, the court had waxed eloquence on the subject in Anuradha Bhasin. The same court simply left the matter to theexecutive to determine the appropriateness and need for the citizens of the erstwhile State of Jammu & Kashmir to have 4G. It simply failed to enforce the fundamental right that it found to exist under Article 21 of the Constitution, viz., the right to access internet.

The next example is the actions of certain State governments who have suspended the applicability of several labour laws through an Ordinance route. Challenges have been made to these actions of the States. The challenges made to the Citizenship Amendment Act, the repeal of Article 370 of the Constitution of India and the conversion of State of Jammu & Kashmir into Union Territories, the challenge to the use of electoral bond are all few examples of procrastination and reticence. There are other examples of individuals being detained under various detention laws like National Security Act and Public Safety Act. Challenges of these detention orders were not decided expeditiously. Some scholars believe that the Court has, of late, allowed these challenges to remain undecided thereby providing an unfair advantage to the Government as against the citizens fundamental rights.

Covid 19 has simply provided the executive an excuse. An executive that is always looking to put forward a "national security" argument when a citizen seeks enforcement of fundamental rights. Covid 19 situation is no doubt a very difficult situation. Many states in India are grappling to deal with the aftermath of Covid 19. The Union Government has invoked the National Disaster Management Act, 2005 and states have invoked the Epidemic Diseases Act, 1897. These enactments give enormous powers to the executive to act. All the more reason that Courts in this crisis should be extremely vigilant and cautious of claims put forward by the executive. There has been criticism that many states have turned into police states rather than dealing with the Covid 19 crisis as a medical one. One particular criticism is very notable :

"The language used is still one of law and order: "lockdowns," "curfews," "fines" and "surveillance." It is not just the optics and semantics of it—it seems that the police departments of the country and not the health departments have been put in charge of the management of Covid-19."[15]

If the court fails in protecting and enforcing the fundamental rights of the citizens of this country, in this time of crisis, history will not be too kind to it. I am reminded of what a US Supreme Court Judge, Learned Hand once said

I hope he is proved wrong when it comes to Indian Courts. If not, this undoubtedly will be the ADM Jabalpur moment repeating itself.

[1] H.Karthik Seshadri is an Advocate practising in the Madras High Court and Partner of Law Firm, Iyer & Thomas. He tweets @advkarthiksesha and may be reached at [email protected]. Views are personal.

[7] Inland Revenue Commissioner vs. Rossminster Limited, (1980) AC 1011; Lord Wilberforce : "For my part, I think the time has come to acknowledge openly that the majority of this House in Liversidge v. Anderson were expediently and, at that time, perhaps, excusably, wrong and the dissenting speech of Lord Atkin was right."

[8] Korematsu vs. United States, 323 US 214, For appreciating the facts of the case see also Sanjoy Ghose, https://theleaflet.in/korematsu-and-cricket-a-critique-of-indias-supreme-court-during-the-pandemic/