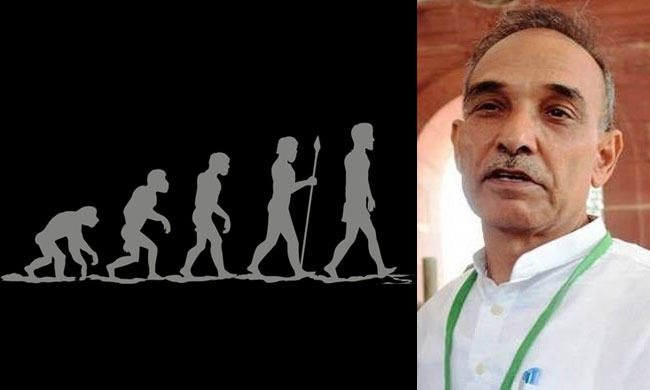 x
Which side the law should take in the battle between myths and scientific facts?

"It shall be the duty of every citizen of India to develop the scientific temper, humanism and the spirit of inquiry and reform" - Article 51A(h), Indian Constitution.Is it too much to expect that a Parliamentary debate will reflect this aspirational spirit of our Constitution?For those rooting for scientific temper as expected by the Constitution, a discussion which took place in Lok Sabha...

"It shall be the duty of every citizen of India to develop the scientific temper, humanism and the spirit of inquiry and reform" - Article 51A(h), Indian Constitution.

Is it too much to expect that a Parliamentary debate will reflect this aspirational spirit of our Constitution?

For those rooting for scientific temper as expected by the Constitution, a discussion which took place in Lok Sabha on Friday was a huge disappointment.

BJP MP Satyapal Singh questioned Charles Darwin's theory of evolution on Friday, saying that human beings are descendants of sages and not monkeys as propounded by Darwin. The ex-minister of State for Human Resource Development said this during a discussion on Protection of Human Rights (Amendment) Bill, 2019. He went on to make a point that the Indian culture did not value human rights and that the theory of rights is a 'western concept'.

He continued, "Our culture says there's no need for human rights workers as we need to focus on being honest good righteous people. We need to treat people the way we want to be treated. Not just humans we need to treat all humans with respect. This is the ideals of our culture."

This is not the first time Singh is denouncing the theory of evolution.  In January last year, Singh had said that Darwin's theory of evolution is "scientifically wrong" and had gone to the extent of saying that it should be removed from syllabus

"It [the theory of evolution] needs to change in school and college curriculum. Since the man is seen on Earth he has always been a man," he had said.

This regressive debate reminds one of a particular trial that took place in the year 1925, in Dayton, Tennessee, United States of America known as the "Scopes monkey trial".

A law passed by the US state of Tennessee in 1925  prohibited public school teachers from denying the Biblical account of mankind's origin and teaching Charles Darwin's theory of evolution. This law was introduced by John Washington Butler and was hence known 'Butler Act', though officially named 'Tennessee Code Annotated Title 49 (Education) Section 1922'.

That it shall be unlawful for any teacher in any of the Universities, Normals and all other public schools of the State which are supported in whole or in part by the public school funds of the State, to teach any theory that denies the Story of the Divine Creation of man as taught in the Bible, and to teach instead that man has descended from a lower order of animals.

The prohibition was on the premise that theory of evolution was anti-christian as it contradicted the biblical version.

American Civil Liberties Union (ACLU) planned to oppose the Butler Act on the grounds that it violated the teacher's individual rights and academic freedom, and was therefore unconstitutional. They offered to defend anyone accused of teaching the theory of evolution in defiance of the Butler Act.

George Rappleyea, a lawyer, saw this in the newspaper and wanted to challenge the statutory ban on teaching Darwin's theory.

He then convinced John Scopes, a science teacher, to conspire with him and deliberately be accused of violating the butler act and teaching evolution.

Scopes picked Clarence Darrow, one of the best defence attorney in the country, as his attorney, even though the ACLU feared the militantly atheistic Darrow would turn the trial into an attack on religion rather than a defense of the First Amendment.

The district's attorney-general Tom Stewart was the lead prosecutor and William Jennings Bryan was the assistant prosecutor, arguing on behalf of the state.

In what went on to be known as the 'trial of the century', Darrow argued that public schools should teach science and facts. William Jennings Bryan argued that if evolution wins, Christianity goes, which obviously would hurt the sentiments of deeply religious people. Darrow on the other hand said that this was not a fight against religion, but a fight for a civilization based on rationality. Everyone listened to this sensational trial on their radios. The case was thus seen as both a theological contest and a trial on whether modern science should be taught in schools.

Darrow's witnesses were scientists who were to be asked to explain the theory of evolution. But John Raulston, the judge, said he was called on by God, and could not permit them to testify in court. So Darrow was left with no choice other than calling a Bible expert. So he called the prosecutor William Jennings Bryan to testify - a move that surprised everyone.

He then went on to ask him about the story of Adam and Eve, and that if he believed Eve was created from one of Adam's ribs. William Jennings Bryan started to get flustered. He then asked him where did Cain's wife come from and and how many people lived in Ancient Egypt. Bryan got embarrassed and replied that he would leave it up to the agnostics to find out.

Taking full advantage of the poor testimony of Bryan, Darrow asserted that bigots and ignoramuses should be prevented from controlling public education policy in US.

But the court ruled in the favour of the State. And Scopes was held guilty under that Butler Act. Darrow and Scopes expected this. Darrow was not upset as he had now the opportunity to take the issue to the higher courts . So they later appealed to the Supreme Court of Tennessee. But they lost the appeal too and the judges found the statute to be constitutional.

"We are not able to see how the prohibition of teaching the theory that man has descended from a lower order of animals gives preference to any religious establishment or mode of worship", the Court held upholding the Butlers Law.

Finally, the Supreme court of United States ruled in Epperson V. Arkansas (1968) that the Act contravened the Establishment Clause of the First Amendment. The Court held that the First Amendment to the United States Constitution prohibits a state from requiring "that teaching and learning must be tailored to the principles or prohibitions of any religious sect or dogma." Tennessee had repealed the Butler Act the previous year.

As India is also witnessing similar debates, a pertinent question arises : Which side the law should take in the battle between myths and scientific facts?

People have the freedom to believe anything they want to. But when it comes to law-making, it should be guided by reason and facts and not by fantasies.

We need our parliamentarians to be factual and realistic. It is disheartening to see science getting lampooned by myths, that too on the floor of the House.

(The author is a student of Govt Law College, Ernakulam, and may be reached at [email protected] She tweets at @RantingDosa)