Ethical Dilemmas During The Times Of COVID-19 Lockdown 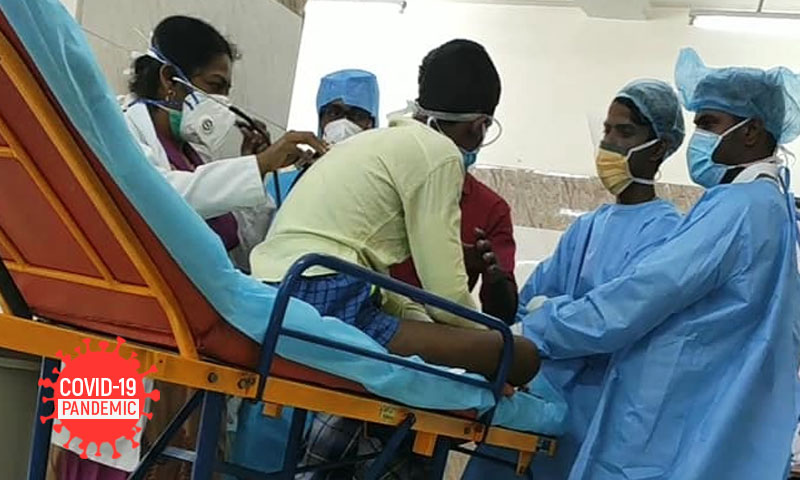 x
As economies plummet and supplies dwindle, while mortality rates spike and panic hits the proverbial roof, we must ask ourselves whether it is legal and ethical to let people die of the virus so that we can survive?

The corona virus is novel not only to the spectrum of contagion but also to our underprepared legal regimes. The Government has declared a national lockdown for 21 days to control the transmission of the pandemic. FIRs are being lodged for negligently spreading the disease. On the one hand, restrictions are being imposed on the liberty and freedom of movement of people with a view to control...

The corona virus is novel not only to the spectrum of contagion but also to our underprepared legal regimes. The Government has declared a national lockdown for 21 days to control the transmission of the pandemic. FIRs are being lodged for negligently spreading the disease. On the one hand, restrictions are being imposed on the liberty and freedom of movement of people with a view to control the spread of infection. On the other hand, prisoners are being released for the very same reason. Freedom of speech and expression is curtailed - a person spreading misinformation can be arrested. Whether these measures will ever be tested on the anvil of proportionality is uncertain. For now though, the Courts across India have closed their doors as well.

This dire situation harks back to the conundrum of the Speluncean Explorers, a jurisprudential thought experiment. The premise is that a group of spelunkers (a fancy word for cave explorers) get caved in and realize that they will soon starve to death once their supplies run out. They decide that the best course of action would be to kill and eat one of their fellow members so that the others can survive. As luck would have it, they are rescued shortly thereafter but promptly put on trial for murder, an offence punishable with death penalty. As a member of the jury, would you hold them guilty? Strict application of the law would undoubtedly call for a conviction. The exigent circumstances of the execution though, might exhort us to condone even cannibalism. There are no easy or correct answers to this dilemma in ordinary law.

The Covid 19 crisis poses a real-life iteration of the Speluncean hypothesis. As economies plummet and supplies dwindle, while mortality rates spike and panic hits the proverbial roof, we must ask ourselves whether it is legal and ethical to let people die of the virus so that we can survive? Would Bentham's principle of the greatest good for the greatest number continue to be our guiding moral compass during these testing times? Humankind has flourished by somewhat defying the evolutionary principle of survival of the fittest. We pride ourselves on giving rights to the weak, healthcare to the sick and welfare to the poor. However, our virtuosities are no match to the evolution of the Covid-19. Take Italy, for instance, one of the worst affected countries. Its medical system is so swamped and resources so scarce that it has reportedly decided not to treat persons above the age of 80 or with ailments like heart disease. The rationale is coldheartedly obvious – the meagre resources must be expended on those with a higher chance of survival, rather than wasted on those most vulnerable to the disease. Withholding critical healthcare from selected persons is a serious breach of their right to life, particularly when the aged and the ailing are in greatest need of it.

In India, this broad fundamental right enshrined under Article 21 of the Constitution cannot be revoked even in a national emergency. Government run hospitals are bound to act fairly and are proscribed from discriminating between patients on the basis of age or medical condition. Deaths caused by lack of basic infrastructural facilities, like the one in Kota which witnessed the deaths of several infants, can also be pinned squarely on the hospitals. This poses a difficult legal question. Can the family members of the deceased sue doctors and hospitals for medical negligence or damages for deliberately withholding medical assistance? Can a mandamus be issued to Government institutions to provide treatment without discrimination? Or would the epidemic constitute a reasonable restriction on the patients' right to life? Whatever the legal solution may be, the moral question still remains - should we let octogenarians die so that those in the prime of their life can survive? Let us also look at this from the perspective of the health workers. There is an acute shortage of masks and protective gear, implying that health workers are constantly endangering their own lives as well as those of their family members when they come in to work. Several have already contracted the virus from their patients. Their number is grossly insufficient to handle the teeming numbers of the sick. They are overworked to the brink of exhaustion and their working conditions are inhumane enough to raise red flags under labour laws.

In these circumstances, can a doctor or a nurse be compelled to work so that a larger number of persons receive medical assistance? If they deliberately absent themselves from work will we initiate disciplinary proceedings against them? Sue them for breach of contract? Or would we respect their own right to lead a healthy life, which would include not exposing themselves to a dangerous pathogen without adequate protection? Such examples are rife today. The story of the cruise ship, the Diamond Princess, a tragedy of Grecian proportions, needs no re-telling. Its docking and subsequent quarantine at Yokohoma, Japan, was catastrophic not only for its own passengers but also for the Japanese residents. Unsurprisingly, another ship titled the MS Braemar was subsequently denied entry into several Carribbean ports after some passengers tested positive for Covid-19. They had no remedy in law or contract. Permissions and visas granted to transportation vessels or individuals are legitimately being revoked to prevent the virus from spreading. No popularly elected Government would risk subjecting its own population to such a grave contagion by sheltering the infected. No doubt, these passengers, having foolhardily embarked on a voyage in the midst of a pandemic, have willingly placed themselves in harm's way. Shouldn't they suffer the consequences alone without putting others in peril? That said, is it acceptable to maroon the passengers and crew indefinitely on the ship, knowing fully well that they will eventually succumb either to the virus or to starvation after they exhaust their food, water and medical supplies? Is this a mere case of volenti non fit injuria or would it tantamount to culpable homicide/ murder?

Fortunately for the Braemar, Cuba finally permitted it to dock on humanitarian grounds. There is a severe dearth of such compassion these days. When the virus claimed its third casualty in India, a 63 year old resident of Mumbai, reports surfaced that he and his family members had received abusive hate messages from the neighbours for spreading the infection. Much like tea bags, we only show our true colours when we are dunked into hot water. Meanwhile, we continue to stockpile essential products such as hand sanitizer, masks and even groceries, ensuring that they will be unavailable to persons and at places where they are more urgently required. There may be a law against hate messaging but none against frenzied shopping. Everyday life involves a delicate balancing of competing rights and interests. However, hard cases like these are wont to throw us off our balance and leave us teetering on the edge of ruthlessness. Time is ripe for us to retreat into our Speluncean caves – the lockdown should make that easier to imagine – and think about the extremes to which we are willing to go to protect ourselves at the cost of others, and what happens to the rights of those who we chose to abandon at this crucial juncture.

(Bhabna Das is a lawyer practicing in various Courts in Delhi with close to 10 years work experience. She graduated from the National Law School of India University, Bangalore, in the year 2010. She has assisted Justice A.K. Patnaik (Retd. Judge of the Supreme Court of India) in revising and updating the latest editions of the commentaries GP Singh's Principles of Statutory Interpretation (14th ed) and DD Basu's Shorter Constitution of India (15th ed). Views Are Personal Only.)