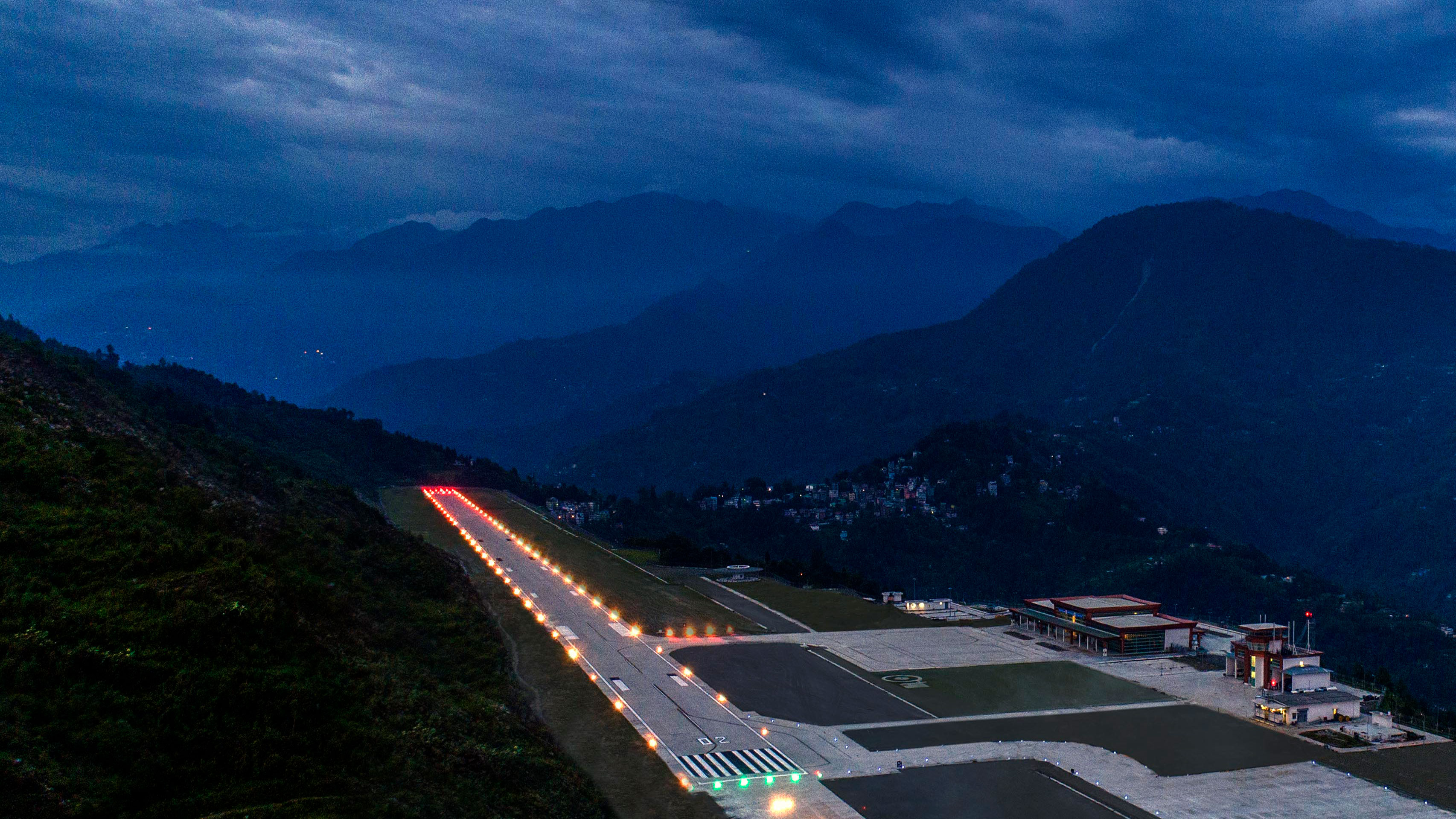 With the recent accident in Calicut International Airport, Kozhikode (KIA), it is time that we introspect the safety measures in airports which have tricky runways. "Critical airfields" or performance-limited runways are often categorised in most airline SOPs as the airports with runways that are risky for take-off and landing operations. Hence, after a mandate by the DGCA, most...

With the recent accident in Calicut International Airport, Kozhikode (KIA), it is time that we introspect the safety measures in airports which have tricky runways. "Critical airfields" or performance-limited runways are often categorised in most airline SOPs as the airports with runways that are risky for take-off and landing operations. Hence, after a mandate by the DGCA, most airlines stress on the operations to be done by pilots trained and cleared for the same.

The five tabletop runways in India are also included as critical airfields. Tabletop runways are built on the top of a hill, typically in mountainous regions. It creates an optical illusion of being on similar ground level from an aerial view. Hence, given the geography and need for connectivity, Mangalore (Karnataka), Kozhikode (Kerala), Shimla (Himachal Pradesh), Lengpui (Mizoram) and Pakyong (Sikkim) were developed into as tabletop runways.

However, with routine scares and two major incidents on these runways, one cannot help but question whether these runways are really safe for commercial flights. Most commercial operations are carried out through aircraft like Boeing 737 and Airbus 320, or the wide-bodied models like Boeing 777 or Airbus 330. Given the length of tabletop runways, most of these aircraft stand a huge risk of over-shooting the runway, even when veered by an experienced hand.

What happened at Kozhikode?

On August 7, 2020, a Boeing 737 operated by Air India Express from Dubai to Kozhikode skidded dangerously with a slower rate of braking and deceleration as the plane overshot the runway. As a result, the fuselage broke into two on the edge of a cliff. While investigation on the accident is underway, initial reports suggest that this happened due to excessive rain and tailwind while landing. The casualty count stands at 18 including cockpit crew.

Calicut airport: One among the many?

Runway excursions, as often referred by the International Air Transport Association (IATA), can occur due to multiple factors, like unstable approaches, failure to go-around and the condition of the runway. While the incident in question is still being probed, the factor of 'runway condition' cannot be ruled out completely in such cases, considering the unique type of runway. 'Runway' condition also includes how well the runway has been maintained.

Calicut Airport at Kozhikode has a Runway End Safety Area (RESA) of 240 m as required by Annex 14 of the Chicago Convention. However, there were no arresting systems in place to ensure that the overshooting aircraft could reduce its acceleration. There have been warning signs of runway skidding being a regular feature associated with the weather of Kozhikode. The latest incident was a SpiceJet-operated Bombardier Dash 8 skidding and damaging Instrumental Landing System (ILS) Beacons, but without a major accident. In 2019, DGCA issued a show-cause notice to the airport authorities for poor maintenance of the runway including addressing issues like rubber deposits, water stagnation and cracks on the runway.

Air India Express 1344 is not the first of its kind involved in an accident like the one in question. It bears an uncanny resemblance to the Pegasus Airlines incident at Sabiha Gokcen Airport at Istanbul, Turkey, earlier this year. Though that airport does not have a table top runway, the aircraft skidded on the runway and plunged into the ditch before the fuselage broke into three. Investigation is also underway for this case. Apart from this, there have also been many incidents on the tabletop runways of Nepal and USA by virtue of the unique nature of these runways.

As per Article 44 of the Chicago Convention, the International Civil Aviation Organization (ICAO) is mandated to promote safety in international air navigation, ensuring regular, efficient, and economical air transport. Also, passenger safety is the recurring theme in the Convention, and forms the basis of International Aviation Law. The IATA also places 'Safety' as its number-one priority.

The ICAO has prescribed standards for runways in Annex 14 A (Aerodromes), but contains no reference to tabletop runways. The Runway End Safety Areas (RESA) are required to be at least 90 m, which should be 240 m for runways with a length of 1200 m and above (Code 3 and Code 4 Runways as per Annex 14). The DGCA, which also shies away from categorising such airports, has promulgated these minimum standards in India through 'Civil Aviation Requirements' (CAR) in 2015 (w.e.f. 2018) as per Aircraft Rules, 1937.

In that document submitted to the ICAO in 2015 (w.e.f. 2018), the DGCA also mentions that these standards may be reduced if there are appropriate arresting systems in the overrun areas, subject to the DGCA's approval. Enhancement of aircraft deceleration should be the ultimate object of these RESAs.

Not the first, but should be the last

The Mangalore incident (IX812) is often referred to when disasters pertaining to these runways are discussed. There was a momentary scare in 2019, where another Air India Express flight from Dubai veered off the runway to soft ground in Mangalore. The key observation on tabletop runways is that there is no room for error from any of the factors contributing to a successful take-off and landing—that is, neither cockpit crew, weather, aircraft nor runway safety measures. But, in such incidents, will risks mitigate if there are no errors? Can one guarantee no errors in the future? At this juncture, it ceases to be simply a question of skill, but becomes one of averting continuing danger. Would it be wise to continue operations on these runways?

Let us look at other tabletop airports around the world. There are three known tabletop airports in USA. One of them in California is privately owned, which allows no commercial operation flights. The second one in Arizona is used only for general aviation purposes (private jets). The third one in West Virginia has Engineered Materials Arresting System (EMAS) to compensate the 1000 ft (approx. 300m) RESA requirement placed by the Federal Aviation Administration (FAA). Yet, as per the data in 2017, only 4% of its operations were commercial. Closer to home, in Tribhuvan International Airport, Kathmandu, as per Nepal's National Airports Plan (2012 Draft), there is RESA of 90 m only on one side. The plan also observes that it is not compliant to the ICAO-stipulated 240 m. Despite this being illegal in aviation, the length of the runway is 3050 m, which is far higher than the length offered by such runways in India. Hence, wide-bodied aircraft operate, albeit with some risk, on this airport.

Given that table top runways continue to remain open for commercial aircraft in India, if action is not taken immediately, we will be have to witness many more instances of runway overshooting.

The Mangalore Accident Investigation Report lays down several recommendations to improve the safety of tabletop airports. Helmed by Air Marshal (Retd.) B. N. Gokhale, the report clearly mentioned removal of downward slope in the overrun area, maintenance of RESA and installation of Arresting systems (EMAS and SGA) for all airports in India. It emphasised the need to have EMAS, despite the operational and maintenance costs, on airports like Mangalore. Other airports were recommended to have at least Soft Ground Arresting (SGA) systems.

One can observe that these recommendations are catered to operational airports. Instead of shortening existing short runways, creating stronger ground arresting systems may fulfil the purpose of safety in the airports. The first recommendation was fulfilled partially. However, others were not implemented by the Airport Authority of India (AAI) given the costs involved.

The legality of these runways, for lack of any mention, has not been questioned yet. Currently, if the ICAO's standards are met and the aerodrome is certified, it can be functional. But these airports require higher thresholds of safety implementation, if not acknowledged by the ICAO, then by domestic bodies like DGCA.

There are multiple ways in which this looming question of tabletop airports and operations therein can pan out. First alternative is to stop developing any further of these runways and close down the current ones for operations. This solution will be unpopular considering that building of airports is an issue of connectivity and commerce. Also, there are other critical airfields, which are not tabletops and have similar issues. These ideas can be a barrier to India's growing civil aviation needs.

The second alternative, is to restrict commercial operations and not permit certain models of aircraft on these runways. Smaller aircraft should be used to ply to these airports and provide more connecting destinations. The limited commercial operations of Lengpui is an example. Most of its operations are connected through other airports like Kolkata and Guwahati. However, this alternative is subject to implementation of safety measures as discussed.

The third alternative is to not allow commercial operations and leave the airports for general aviation purposes. This requires analysis of data such as annual footfall of passengers and current operations to be able to introspect the commercial viability of the airport. As per data of 2017-2018, categorised as a State Government Airport, Lengpui recorded only a 6.8% increase in footfall. As an international airport, Calicut recorded only 2.1% increase in footfall, while nearby Coimbatore recorded 31.9% increase, Cochin - 32.7% increase.

At this juncture, the second and third alternative must be combined as a plan of action for these airports. Instead of resorting to the usual blame game and justification, the authorities, particularly AAI, must now right the wrongs. Also, an overhaul of the critical airfields should be done to ensure that the safety standards prescribed by ICAO are fulfilled not just in a minimalistic manner, but in a 'more than required' sense (E.g. FAA's guideline of 300m/1000ft). After all, as per Article 37 and the recurring theme of Chicago Convention is promotion of safety in civil aviation so is adherence to Standard and Recommended Practices (SARPs).