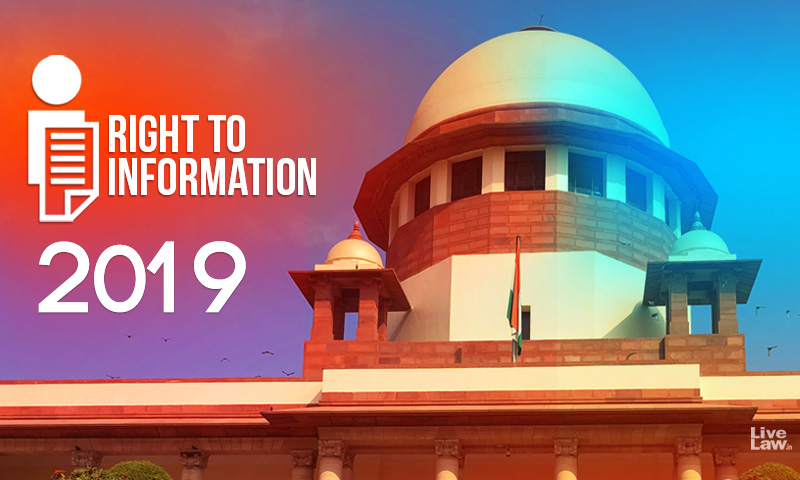 The 2019, an unforgettable bad year for RTI, the people's right diluted in the 70th year of Constitutionally ruled India. 2019 infamous Amendment that shrunk the size, significance, and power of Information Commissioners, besides violating the federal scheme of Indian Constitution. While 12th October is celebrated as day of empowering citizen with information, the Government of India...

The 2019, an unforgettable bad year for RTI, the people's right diluted in the 70th year of Constitutionally ruled India. 2019 infamous Amendment that shrunk the size, significance, and power of Information Commissioners, besides violating the federal scheme of Indian Constitution. While 12th October is celebrated as day of empowering citizen with information, the Government of India has assaulted the access right with a strong blow through Rules 2019, far more damaging than the Amendment. Initially the RBI was resisting the disclosure in spite of the repeated orders of CIC, show-cause notice to Governor of RBI and the strong direction of the Supreme Court. However, the RBI was admonished by the Supreme Court and warned with use of powers for contempt of court. That was the ray of hope for RTI from the apex judiciary. In November, the Supreme Court apparently agreed with the judgment of Delhi High Court to continue the Supreme Court as a whole to be within the purview of the RTI, but excluded office of CJI in such specific form from direct filing of RTI requests. In addition, the SC went on interpreting each and every provision of RTI expanding scope of exceptions and shrinking the chances of disclosure. It gave an inexhaustive list of 'information's that need not be disclosed. Still a small ray of hope of 'public interest' is giving required oxygen to the RTI, to survive further and help democracy to survive.

But the fag end of 2019 saw another assault coming from bench of RTI in the form of observations. The Chief Justice of India observed that "there have been innumerable cases of blackmail, extortion in its working". This observation was made by the bench of Chief Justice of India S A Bobde and Justices B R Gavai and Surya Kant, which was hearing a PIL seeking implementation of Supreme Courts directive to appoint Information Commissioners in Centre and States. The bench also wanted to develop some guidelines to curb such abuse. Incidentally, the Government of India was reporting to Parliament, that they had no complaints about gross misuse of RTI and the Act is potential enough to tackle the abuse, if any.

This remark is not part of ratio decidendi (reason for decision) or obiter dicta (an opinion not legally binding) arising out of a judgment after hearing of a case on merits. In fact, the judgement came out in that case, without any such observations about abuse. The judges were in conversation with the senior counsel Prashant Bhushan. They were hearing the arguments. To extract a point or to get a clarification or to get a response, Judges will be asking certain questions or making some observations that might prepare the parties to convince the court on a point relevant in a case. The media present in the court, (because it is public hearing), finds the remarks highly interesting, reports the same highlighting most sensational point as lead sentence and caption. These remarks are neither writs, nor commands, nor directions nor conclusions nor comments.

The conversation went on like this: Prashant Bhushan argued that Government was frustrating the working of RTI Act by not appointing the ICs. Then the CJI Bobde said there were also some concerns about the working of the Act. "There is a kind of paralysis and fear… People are afraid to take action," he said. Answering this, Bhushan said those doing wrong would be afraid to act. Then CJI made an important point: "Everybody is not doing wrong.". He added that he had been told that in Maharashtra the "Mantralaya is paralaysed because of this…We don't know why". One should understand that the 'observation' of the CJI was in the context of a situation in Maharashtra as it was told to him. It cannot be considered as a general conclusion of the Bench or CJI that RTI is always misused for blackmail. He is only expressing concern that unnecessary information was being sought and there was no element of locus standi. Bhushan rightly clarified saying: "there should be no locus standi in RTI as it would discourage public-spirited persons from seeking information….I file so many PILs". Then CJI responded: ".. filing PILs was different, there is the other side….Is RTI activist a profession!" Justice Gavai added, "In Mumbai, there are letter heads saying RTI consultant." It might be true. The CJI further clarified: "We are only saying this from our experience as judges. A public-spirited person should be someone who has something to do with the issue". It is a suggestion, not a direction.

We are not against RTI - CJI

Bhushan gave the example of electoral bonds, where political parties would have gained benefits, to make a larger point that only some member of the public would seek information to understand if there was corruption. Then CJI said, "We are not against information and right to information… there is a need to evolve some kind of guidelines. Suppose there is some specialised tender, why is some person not related to that business at all interested…They may be set up by rival business. We are only asking for a filter that can be applied". It clearly means that he was not against the RTI. Media should have given a headline that CJI was not against RTI.

Bhushan has repeatedly said that putting in place any rider would discourage genuine seekers of information. Then at this point of context, CJI explained: "You are speaking of bonafide situations. There have been innumerable cases of blackmail, extortion. We want to address that, wondering if the abuse could be curbed. "You are arguing as if abuse doesn't exist… if something can curb that abuse, think of that way.

Is RTI leading to blackmail?

Whether RTI was leading to blackmail? Apprehending abuse, can RTI be curtailed beyond the exceptions and limitations of RTI? These are the questions that need to be discussed.

Right to Information Act grants a very small right to citizens, i.e., to copy of a sheet in the file of public authority. That is all. How can a certified copy of a page, which is issued only after thorough examination whether it is exempted under Section 8, help somebody to black mail the officer?

Indian Penal Code has not listed 'blackmail' as an offence. If someone knew the defect or crime of Mr. X and extorts money from him in return of not exposing defect, it is understood as blackmail. However, Mr X can complain against the extortionist and on proof of it he could be jailed under IPC. Illegal extortion is an offence. The Home Ministry should tell the nation, how many cases of extortion were complained of using the documents obtained under RTI Act. Whether NCRB has any record to show that RTI was used to blackmail and officers were victims of such blackmail? Has anybody verified it?

If someone files RTI applications frequently on various issues or if an Advocate helps the RTI activist to file such applications and secure the documents which might help them in establishing a fact before court of law or clarify an accusation, why not he practices it as a profession? The profession could that of a para legal or person providing a legal aid or a person who is seeking information in public interest? Being engaged in wholetime activity of getting information cannot be straight away called as profession of extortionist.

Let us examine other aspect also. When a corrupt engineer made huge money on repeated contract of repairing a road, can a citizen seek copies of the file containing the approvals, work details and sanctions of funds? If that officer is scared of exposure, why should justice system be worried about it?

When a citizen was bribed by Public Servant!

During a second appeal hearing a citizen brought a CD before the Central Information Commission containing the offer of Rs 10,000 as a bribe to the RTI applicant by that corrupt Engineer so that such information will not be exposed, and he is not prosecuted. The applicant demanded the CIC to prosecute the Engineer for offering a bribe to him. For the first time in independent India, after the commencement of the Constitution that mandates rule of law, a public servant offered bribe to a member of public, which is reverse of what generally happens in a corrupt society. The information legally obtained about corruption in public offices has empowered the powerless citizen, who is otherwise a simple taxpayer. Is it not real empowerment? If a corrupt officer has been scared of RTI question of a citizen, is it not victory of democratic power? Even in the case of wrong of the citizen lured by bribe of Rs.10000 from engineer, our criminal justice system has no provision to punish the citizen for such an act. However, its highly immoral and not acceptable. It is absolutely abuse of the RTI, and they should not be encouraged. On complaint from that engineer, there shall be an inquiry followed by punishment of culprits as per provisions and process of law. Is that happening?

The Supreme Court in its wisdom has, through several judgments, secured the freedom of speech as a fundamental right and requisite of democracy with a strong belief that abuse of that freedom could be sufficiently tackled by the restrictions. RTI being a part of such right to freedom, is restricted by all those reasonable restrictions in Constitution, and exceptions under RTI Act, etc. The IPC, Information Technology Act, Cable TV Network Act, and plethora of other legislations have enough of provisions to curb abuse of the information brought out by RTI Act. The Supreme Court is expected to decide only on basis of solid evidence and not on some isolated experiences or observations by some friends. RTI is serving as ten-rupee public interest petition that empowers the citizen to enliven the democracy. In the name of some abuse, without assessing its length and breadth, if the use is curbed and RTI is diluted or power is given to punish the abuse, that power will be totally abused, and corrupt governments will rejoice. My Lords will you please, understand!