The Curious Case Of Demolition And Restoration Of Guru Ravidas Temple 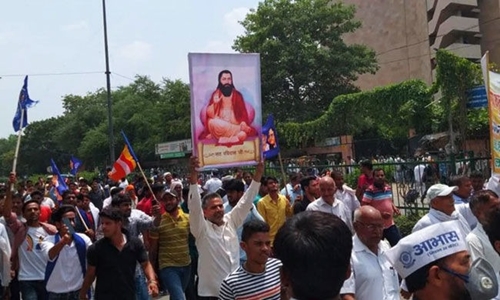 In its initial years, the judiciary undertook a very principled interference with the decisions taken by the legislature or the executive. Due to failures of successive governments, and more particularly after attempts were made to develop a 'committed judiciary', it was coerced to expand the sweep of its jurisdiction and adopt an activist/governing approach. The perception of the...

In its initial years, the judiciary undertook a very principled interference with the decisions taken by the legislature or the executive. Due to failures of successive governments, and more particularly after attempts were made to develop a 'committed judiciary', it was coerced to expand the sweep of its jurisdiction and adopt an activist/governing approach. The perception of the public therefore gradually strengthened towards the judiciary and in a sense it came to be largely believed that the executive commits wrong and judiciary comes forward as the savior and corrects such wrong. This perception has remained so and the judiciary in the tussle with the executive over custodianship of the Constitution, has acquired a large lead through various judgments.

Lately, this perception has been tampered with. In a lot of issues, the judiciary has been perceived to be at fault by the public. In a good example of the same, the Guru Ravidas temple case and the way it has been dealt with, turns this perception built over the years, upside down. The Supreme Court got the temple demolished, no review was sought, public unrest occurred, then Centre came forward with an offer 3 days before a major state election and the judiciary accepted and permitted building a new permanent structure at the same site. The perception which therefore went to the public was that the judiciary did wrong by being bent upon to demolish the structure hurriedly and the Executive came forward as their savior. This, in my view, is lethal for the future. The facts and a short timeline of the case will suggest why I take this view.

Guru Ravidas, a 16th century mystic sage, is venerated largely by the oppressed Dalit community in the regions of Punjab, Rajasthan, Maharashtra and Madhya Pradesh. Guru Ravidas Temple/Guru Dham in Tughlaqabad was constructed several decades ago. It is believed that this land was donated to Guru Ravidas in 1509 by Sikander Lodi. The land at the site is of utmost historical and religious importance to all followers of Saint Guru Ravidas as the Guru himself had lived at the site. Therefore, the temple carries special importance as a site of historical and religious significance. The Delhi Development Authority (DDA) initiated eviction proceedings against the temple citing that it was situated on encroached public land. Claiming adverse possession of the land, a suit was filed by Guru Ravidas Jainti Samaroh Samiti - a registered Society managing the temple - seeking prohibitory injunction against DDA. The suit was dismissed by trial court. The appeal filed in the Delhi High Court was dismissed by the single bench of Justice Valmiki Mehta on 13.11.2018, observing that the Society could not establish its rights over the land.

On 08.04.2019, the Special Leave Petition filed against the Delhi High Court judgment was dismissed in limine by the Supreme Court bench of Justices Arun Mishra and Navin Sinha. The bench granted two month's time to the Society to vacate the premises. It was also ordered that in case it was not vacated within the stipulated time, it will be treated as violation of the order passed by the Court. The parties were directed to report compliance immediately after two months. In July 2019, an application seeking extension of time was dismissed. Noting that the Society has not vacated the premises, the bench of Justices Arun Mishra and M R Shah issued stern directions on August 9 to DDA to forcefully demolish the structure the next day. On August 10, the DDA duly executed the Court's orders.

The demolition led to massive public protests in various parts of the country. In response, on 13th August, the Court directed the counsel appearing to file contempt proceedings and also observed in the order that – "It is made clear to all the persons concerned that in case the situation is aggravated by any one, it will be viewed very seriously and will further aggravate the contempt." On August 14, the SC observed that the demolition should not be politicized. "Don't think we are powerless. We know the seriousness of the issue," the Court said when the counsel appearing for the Guru Ravidas Jainti Samaroh Samiti, referred to the agitation on the issue in Punjab. "Don't speak a word and don't aggravate the issue. You are in for contempt. We will haul up your entire management. We will see what has to be done," the bench also comprising Justices M R Shah and Ajay Rastogi said while requesting Attorney General K K Venugopal to assist in the matter. The national capital was taken by a massive Dalit gathering on August 21 demanding the reconstruction of the temple.

Few days later, in September 2019, interestingly, a writ petition came to be filed by two politicians i.e. Ashok Tanwar and Pradeep Jain Aditya seeking permission to reconstruct the temple. It is here where the twist came. Elections in Haryana legislative assembly were due on 21.10.2019. Three days before this, the Centre through the Attorney General, on 18.10.2019 made an offer to restore the land of 200 sq meters at the same site for the temple and that it will be restored. It goes without saying that the current ruling establishment in Centre and the ruling establishment in Haryana were/are the same. On the day of the elections, i.e. on 21.10.2019, the matter was heard again and the Central Government revised its offer and doubled the land from 200 sq meters to 400 sq meters. The same was recorded in the Court's order. The ruling establishment secured a victory in the elections!

I do not wish to comment upon the merits of the case. Three courts took a common view that the temple ought to be evicted. Law has to be upheld in its letter and spirit. The Supreme Court however went few steps ahead. It not only directed time bound demolition but also chose to monitor the same. With the brickbat of contempt in its hands, the Court made sure the structure was demolished. If the law said so, it must have been done. However protests happened. Public at large came on streets against the Supreme Court's orders and law and order situation ran through a crisis, and the issue took a twist.

In quite contrast to this, let us take another example which highlights the change in the balancing equation between the judiciary and the executive; the Sabarimala judgment. The Supreme Court in a landmark judgment by a majority of 4:1 allowed entry of women in the temple. Protests followed. Contempt petitions were filed against those who openly called for disobedience of court orders, and physically prevented women devotees. The Court however refused to take cognizance of the same. Review petitions and few fresh writ petitions came to be filed and the Court through majority chose to refer the issue to a larger bench without going into merits of the case.

In the Guru Ravidas temple case, no review petition was filed. The writ petition which came to be filed sought a very limited relief. Therefore, without reviewing the final adjudication of the issue, 3 concurrent judgments were unsettled only on the basis of an offer made by the Executive in a writ petition filed by political leaders. The change of stand by the judiciary in view of a belated offer made by the executive generates a negative impression. The Central Government never filed a review petition of any application seeking modification of the order. One may argue that to settle the unrest caused by the judgment of the Court, this may have been done but that is even worse. The institution of judiciary cannot succumb to any pressure, moreso if the pressure is through protests without adopting permissible routes seeking alteration in an order. Though the demolition of an ancient temple caused irreparable and irreversible damage.

Justice Arun Mishra in the Ujjain Mahakaleshwar temple judgment wrote that – "There is a constitutional obligation to preserve the religious practices of all religions, culture and there is also a corresponding duty to act in that direction. Similarly, such acts which are necessary for the preservation of such historical monuments/deities." Same standard should have applied to the Guru Ravidas Temple as well which has special significance for dalits.

In Guru Ravidas Temple case, a perception was built and a narrative was created that the Supreme Court has not only touched upon the faith of the oppressed class but also demolished the same. The offer by the Executive came within almost two months from the demolition. This offer, though labeled in form of "settle the disputes with respect to considering the demands of the devotees of Guru Ravidasji regarding the site commemorating Shri Guru Ravidas Ji and taking note of the intense religious faith of the devotees in the site." was a political tool with a twin agenda. One, to gain political advantage to woo vote bank of a class of devotees and second, to portray and develop an image that it is the executive which comes forward as the savior of the masses. This has a passive but subtle influence on the perception the public carries. The perception in favour of judiciary was not built in a day. It took time for people to trust this institution. Serious attempts are being made by larger forces at work to restructure this perception. The Guru Ravidas temple issue, shall remain embedded in the history, is one such curious and calculative step. The pillars of judiciary are very strong. I hope the judiciary will overcome this era as well.

I leave it to reader's wisdom and conscience to ponder upon this issue amongst other related issues. It deserves to be debated and discussed. Justice Lokur recently in his article titled "Govt calling the SC shots?" wrote – "At the present moment, silence on crunch issues is not golden." He is not wrong.

Namit Saxena is an Advocate practicing in the Supreme Court of India.

Views expressed in this article are purely personal.