The Effect Of Abrogating Article 370, Will It Increase Or Decrease The J&K Autonomy? 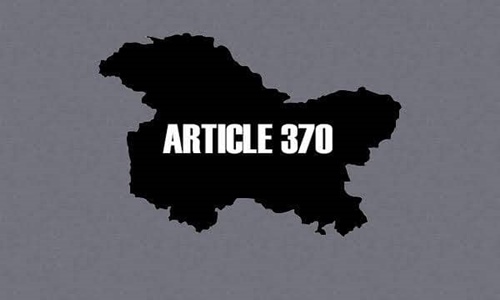 The Author is examining the constitutional question, though hypothetical, about the legal nuances of abrogation of Article 370.

The rationale offered for seeking abrogation of Article 370 of the Indian Constitution is to remove the autonomy of J&K and allow its full integration into the Indian Union. Let us assume for the sake of argument that it is constitutionally permissible for New Delhi to abrogate Article 370 and that it does do so. But then, would not such hypothetical abrogation increase, rather than decrease, the autonomy of J&K?

The political agreement of 3 June 1947 to partition the Indian sub-continent was crystallized in British statutes - the Indian Independence Act, 1947 and the modified Government of India Act, 1935. While India is an ancient civilization, modern-day India and Pakistan are creations of these statutes and have chosen to abide by such constitutional law governing the sub-continent. There is no doubt about the legitimacy of an 'India' and a 'Pakistan' as created by these statutes, and both countries have been recognized by the UN as sovereign member states.

The princely state of J&K was a sovereign state as of 15 August 1947 as per this constitutional law creating India and Pakistan. It was in terms of such law that the Ruler of J&K, who was the sole repository of power in the state, chose to accede to India through the accession instrument of 26 October 1947. Such accession by the Ruler, though unconditional, was only in matters of external affairs, communications and defence and certain ancillary matters. The accession instrument expressly declared that nothing therein would affect the continuance of the sovereignty of the Ruler in or over J&K.

Unlike other princely states acceding to India, the sovereign Ruler of J&K did not thereafter merge the territory of the state into the Indian Union nor cede further subjects to India.

The state Constituent Assembly, subsequently set up in 1951, regarded the constitutional relationship of J&K with India as one of an autonomous republic within the Indian Union. This relationship was later crystallized in the Delhi Agreement, 1952, which was duly ratified by the Indian Parliament and the state Constituent Assembly, and which inter alia permitted the state legislature to make laws conferring special rights and privileges upon the state subjects. The President of India, with the concurrence of J&K, exercised the power under Article 370 to issue the Constitution (Application to Jammu & Kashmir) Order, 1954, which inserted provisions like Article 35A to give effect to the Delhi Agreement and also applied further Articles of the Indian Constitution to J&K (with modifications).

Another provision inserted by this 1954 Order was the proviso to Article 3 of the Indian Constitution. This provision mandates that "no Bill providing for increasing or diminishing the area of the State of Jammu and Kashmir or altering the name or boundary of that State shall be introduced in Parliament without the consent of the Legislature of that State." In other words, J&K has not only not merged its territory into the Indian Union, it has explicitly preserved its territorial integrity as also identity. That, incidentally, also rules out trifurcation of J&K without its consent.

Be that as it may, let us assume that it is constitutionally permissible for New Delhi to abrogate Article 370. What consequences would then flow from such abrogation?

Commentators who identify Article 370 as an obstacle to full integration of J&K into India plead that the abrogation of Article 370 (and Article 35A) would remove the preferential treatment accorded to the state, permit citizens from across the country to settle in J&K and buy land there, and assimilate the people of J&K into the mainstream. Others argue for honouring the autonomy guaranteed by Article 370, asserting that it is Article 370 that makes J&K a part of India, and should Article 370 be abrogated, the accession of J&K to India itself gets undone. The contention is that Article 1 of the Indian Constitution (which lists the States of India) is made applicable to J&K by Article 370 itself, and if Article 370 goes, so does the application of Article 1 of the Indian Constitution to J&K, which would render J&K independent of India.

Both views are, in my opinion, fallacious. J&K became an integral part of India not by virtue of Article 370 of the Indian Constitution but through the accession instrument of 26 October 1947 executed by its sovereign Ruler in favour of India in terms of the law that created modern-day India. The 11-Judge Bench of the Supreme Court held in Madhav Rao (1973) that the accession instrument was an Act of State on the part of the sovereign ruler of a princely state and bound all concerned. The accession made by a sovereign J&K to a sovereign India, therefore, cannot be re-opened and is binding on all, whether in Srinagar or in New Delhi.

Since the basis of the relationship between J&K and the Indian Union is the accession instrument, and not Article 370, the abrogation of Article 370 (even if it was constitutionally permissible) would not undo the accession or make J&K independent of India.

Further, far from assimilation, such abrogation would revert the relationship between J&K and India to the terms of the accession instrument and confine New Delhi's jurisdiction to only matters of external affairs, communications and defence and ancillary matters, with the rest of the matters falling within the jurisdiction of the current constitutional polity of J&K. After all, should Article 370 go, so would all the Presidential Orders under Article 370, most of which had the effect of extending New Delhi's fiat to the state, often to an extent that would be impermissible for other parts of the country. The obvious constitutional consequence of abrogating Article 370 would be to enhance the state's autonomy, which would hardly have been New Delhi's intention. Indeed, it would be a classic case of New Delhi cutting off its nose to spite its face.

Dr. Aman Hingorani is an Advocate at  Supreme Court of India and Author, Unravelling the Kashmir Knot (www.kashmirknot.com)