The Kerala Salary Ordinance- A Cut Above The Rest 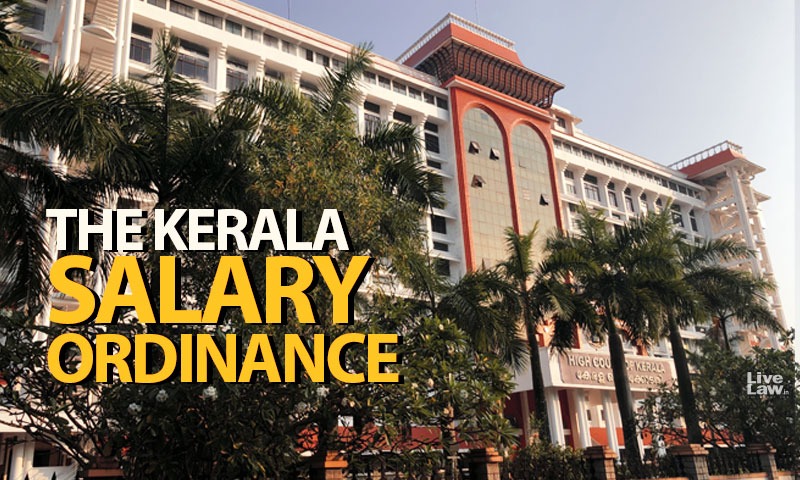 'Extraordinary situations demand extraordinary measures'. [Prithipal Singh vs State of Punjab, (2012) 1 SCC 10]. If such power is ceded to the judiciary, there is no reason why exercise of plenary legislative power under our socialist constitution should be faulted, when faced with an extraordinary crisis. God's own country has done it again- this time as the trendsetter...

If such power is ceded to the judiciary, there is no reason why exercise of plenary legislative power under our socialist constitution should be faulted, when faced with an extraordinary crisis.

God's own country has done it again- this time as the trendsetter in legislative efforts to augment public resources to battle the unprecedented, unforeseen Covid-19 crisis. The Kerala Disaster and Public Health Emergency (Special Provisions) Ordinance, 2020 was promulgated on April 30, 2020 and consequential notifications have also been issued. Two significant orders were passed by our courts on Tuesday, May 5,2020. The first was by the Kerala High Court which refused to stay the operation of the Ordinance and the notifications issued thereunder. The second was by the Supreme Court which refused to entertain a PIL seeking a direction that there should be no cuts in the salaries of the police personnel (the Covid warriors). Both, happily, are a shot in the arm for governments in moulding their policies as demanded by the challenges of the day.

The efforts by Kerala in seeking to tide over the crisis of these trying times by seeking to defer payment of a portion of the Government Servants' and other like employees' salaries (only of those getting a salary of more than 20,000) have been widely misreported as 'cut in salaries of Government Servants'. All that the State did was issue a Government Order on April 23, providing that for the months of April-August 2020, payment of 6 days' salary would be deferred, and to be paid later. The Government Order was challenged by way of a writ petition, and a learned single judge of the Kerala High Court, on April 28, stayed the operation of the GO for two months. This is what the Court held:

"…Prima facie, I feel that law is found wanting to justify the issuance of Ext.P1.

19. I also find from Ext.P1 that there is ambiguity in the manner in which the amounts obtained from the proposed deferment of salary is planned to be utilized. It only refers to the financial difficulty that is faced by the Government. The said financial difficulty is not a ground for the State Government to defer the payment of salary by an executive order. Prima facie, I find that deferment of salary for whatever purposes it may be, amounts to denial of property. In such a view of the matter, I stay the operation of Ext.P1 for a period of two months."

Faced with such a situation, the Government had the Ordinance promulgated on April 30. Disaster and Public Health Emergency have been cited as the necessity for making special provisions. Legislative competence to make the law and prescribe the special provisions is beyond any pale of doubt. The only misgiving could have been that the Ordinance was promulgated to defeat the judicial order of stay. That is surely not so:

The purpose and object of the Ordinance is plain:

" An Ordinance to make special provision for the deferment of any payment in part, due and payable to any person, institution and any pay, in part, to any employee in the event of disaster and public health emergency in the State and for the matters connected therewith or incidental thereto"

"Disaster", in Sec.2(a), means a catastrophe, etc., natural or manmade and includes disasters notified under the Disaster Management Act, 2005. Sec.2(f) defines "public health emergency" as meaning any health situation or emergency and includes any contagious or epidemic disease. Sec.3, overriding any other law, rule, code, etc., empowers the Government to defer any payment due and payable to any person or institution, in part. Sec.4 provides for deferral of part of pay in the case of a government employee. Sec.5, likewise, provides for deferral of part of pay payable to employees of certain institutions, including local self government institutions, statutory bodies, etc. The empowerment of the Government under Sec.3 overrides any law, rule, code, etc., and the empowerment under Sec.4 and 5 overrides any judgement or order of any court or tribunal. The deferral, in all these provisions, is conditioned upon:

The deferred payment shall be given back to the person, institution or employee concerned and the Government shall do so by issuing a notification within six months of the issue of the first notification under Se.3,4 and 5.

Deferral, not denial or deprivation:

The Ordinance engrafts sufficient safeguards to ensure that the person's or an employee's dues from the Government are not denied- only a part of it is sought to be paid belatedly. There is a solemn duty cast on the Government to give back the deferred part pay and an outer time limit is also stipulated. The deferral is hedged with stringent conditions. There can be no arbitrariness or infirmity in such reasonable action. The deferral is to tide over the crisis of a disaster or public health emergency. As part of the Directive Principles of State Policy, Art.47 casts a duty on the State to raise the level of nutrition and the standard of living and to improve public health. Economic and social planning is also a legislative head available to the State in Entry 20, List III. Competence of the State to legislate on the subject is clear and evident from the various entries, not only in the State List but also in the Concurrent List.

Since there is no denial of pay, the deferral of an identified part of pay can be said to be part of the modalities to be worked out by the employer State in disbursement of such pay. It is purely a matter of policy-economic and social. Our courts have recognised the Government has some "play in the joints" in the sphere of public employment. [K.Nagaraj vs State of A.P., (1985) 1 SCC 523]. Further, a law like the instant one, is an economic legislation. The Supreme Court, in R.K.Garg vs Union of India, (1981) 4 SCC 675, quoting from American decisions, held:

Another rule of equal importance is that laws relating to economic activities should be viewed with greater latitude than laws touching civil rights such as freedom of speech, religion etc. It has been said by no less a person than Holmes, J., that the legislature should be allowed some play in the joints, because it has to deal with complex problems which do not admit of solution through any doctrinaire or strait-jacket formula and this is particularly true in case of legislation dealing with economic matters, where, having regard to the nature of the problems required to be dealt with, greater play in the joints has to be allowed to the legislature.

Dealing with a matter of economic policy, the Government is entitled to make pragmatic adjustments which may be called for by particular circumstances (Permian Basin Area Rate cases [20 L Ed 2d 312 : 390 US 747 (1968)]).

Consent of the employee, it is said, is wanting and therefore the Ordinance is assailed as being unreasonable. The mode and manner of disbursement of salary of a Government Servant can at best be pitched as a condition of service. The conditions of some employees of the Government may be changed unilaterally, as the relationship is not governed by contract but by the statute and rules. Consent is not a pre-condition for such change. [State of J&K vs Triloki Nath Khosa, [(1974) 1 SCC 19].

The Ordinance is criticised as having deprived the right to property, for it prescribes postponement of a part of the salary, which is property. Salaries to government employees are to be paid out of public funds. We in India have a socialist Constitution.[ K.Guruprasad Rao vs State of Karnataka, (2013) 8 SCC 418)]. It bears repetition that a pragmatic adjustment, whilst consciously not denying salary, is part of the socio-economic policy. Ultimately, "from each according to his capacity and to each according to his needs" is ingrained in our socialist constitution that empowers the State to place all resources to tide over the crisis occasioned by a public health emergency.

(Author is an Advocate-on-Record at Supreme Court of India)