The Lawyer And The Client 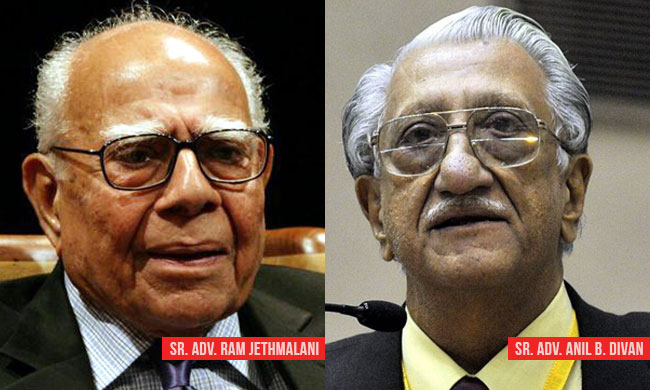 x
Story of Ram Jethmalani and Anil Divan teaming up for arguably the two most important anti-corruption cases.

Ram Jethmalani often employed the prophecy of imminent death – "I am sitting in God's departure lounge", to extract a bargain both in courts and outside. Obviously, no one took them seriously. In April, 2007, seeking an early hearing from the Supreme Court in a high-profile case, Jethmalani cited his astrologer who had prophesized that he won't live beyond July. The Supreme Court...

Ram Jethmalani often employed the prophecy of imminent death – "I am sitting in God's departure lounge", to extract a bargain both in courts and outside. Obviously, no one took them seriously. In April, 2007, seeking an early hearing from the Supreme Court in a high-profile case, Jethmalani cited his astrologer who had prophesized that he won't live beyond July. The Supreme Court refused to get persuaded by this rather dramatic appeal and said "we don't believe in your astrologer". Much before that, in the year 2000, in his book "Big Egos, Small Men" which is an indictment against Vajpayee Government for his unceremonious removal from the Cabinet, he wrote "… I have lived to be seventy-seven. I am a fulfilled soul … I know my end is not far …" He lived for another nineteen years and certainly more fulfilled than he was in the year 2000.

In the innumerable tributes to Jethmalani, references have been made to the cases that were of seminal importance to law and to the person. These tributes however, have missed two cases – the Hawala case and the Black money case. In the former, he played a very significant indirect role and in the later, he himself was one of the petitioners. In both the cases, my late senior, Anil Divan would be the dramatis personae, who around the time of Hawala case had earned the sobriquet, the amicus, for his yeomen service in assisting the court in combating corruption.

Sometime in 1993, Jethmalani received information through his junior that the Central Bureau of Investigation (CBI) is in possession of some explosive evidence about certain senior politicians and bureaucrats who may have received illegal gratification through the Hawala channel. Jethmalani addressed a letter to the then Prime Minister Narsimha Rao complaining about procrastination of the CBI in investigations against those senior politicians and bureaucrats. There was no response to the letter. Jethmalani decided to approach to the Supreme Court by initiating a PIL. A writ petition seeking directions to the CBI was drawn up and filed sometimes in October, 1993 before the Supreme Court. This writ petition was drafted under the guidance of and in consultation with Jethmalani. The petition had the potential of devastating careers and creating tumult in the national politics. A counsel had to be chosen, who was fearless, unapproachable and not likely to come under any extraneous influence. Jethmalani suggested the name of Anil Divan. Divan was approached and he accepted to appear pro bono as a lead counsel for the petitioner Vineet Narayan. At one stage in the hearing, in December 1993, the court indicated that the memo of parties should be amended and all the names mentioned in it should be deleted. The names contained in the petition were of the sitting Cabinet Ministers and Governors. Jethmalani obdurately opposed the suggestion but Divan as a lead counsel in the case, put his foot down as he refused to sensationalize the petition, which in his view, raised a much important issue of the independence of CBI. The memo of parties subsequently stood amended. Jethmalani continued to be actively involved in the preparation of the case and formulation of strategy. In February, 1994 the petitioners filed a rejoinder in which it was alleged that certain amounts of money were transferred to L.K. Advani. In 1996, CBI filed a charge sheet against L.K. Advani in the CBI Court. Divan learnt that Jethmalani has written a letter to the Attorney General for India and to the Chairman, Bar Council of India soliciting their opinion on whether the rules of professional conduct or etiquette prevents him from defending L.K. Advani, as he is closely associated with the ongoing Hawala case. Divan came to know of this through a news report and tried to prevail upon Jethmalani so that he spurns the temptation to appear for L.K. Advani. It was indeed ironical that in his letter of remonstrance to Jethmalani, Divan copiously referred to the Rules of Professional Conduct and Etiquette of the Bar Council of India, which were drafted when Jethmalani was Chairman of the Bar Council of India. Jethmalani retorted by confirming that he was "the architect of the petition (Vineet Narain v UOI), the moving force behind it and advisor to the deliberations". Jethmalani however, did not see any conflict of interest in appearing for L.K. Advani. Later, interestingly Jethmalani communicated to Divan that he would not be appearing or advising L.K. Advani in Hawala case. Divan was extremely heartened and conveyed his pleasure to Jethmalani, with a note of caution that Jethmalani should not review his decision. Not even six months had passed, Jethmalani faxed a letter on 17th September, 1996 to Divan stating that there is "almost irresistible pressure" to appear for L.K. Advani and that he has decided that he will appear for him. Jethmalani signed off the letter with a plaintiff appeal – "I hope you will understand and create no controversy. But if you do, I will equally understand your action". Divan immediately upon receipt of the fax, released a Press Statement along with all the correspondence between the two. In the Press Statement, Divan posed ethical questions to Jethmalani, quite in the way Jethmalani had put out questions to Rajiv Gandhi in connection with the Bofors case some years back. Notwithstanding the protestations, Jethmalani went ahead with advising and appearing for Advani.

The Hawala case led to resignations of the Leader of Opposition - L.K. Advani, two Governors – M.L. Vohra and Shiv Shankar and three cabinet ministers - V.C. Shukla, Balram Jakhar and Madhav Rao Scindia and had an unmanageable repercussion on the upcoming election in May, 1996. The congress party in the general election of was reduced from 244 to 130 in the Parliament and had to sit in the opposition.

Friends at the Bar

In his letter to Divan, conveying his decision to appear for Advani, Jethmalani had added a caveat that if Divan decides to object to Jethmalani appearing for Advani, it will not affect their friendship. Divan did object and they continued to be friends. In 2007, when Jethmalani wrote his autobiography "Conscience of a Maverick", he requested Divan to speak on the release of the book. Divan accepted the invitation to speak provided there were no restrictions on what he was going to speak and in Divan's words, he painted Jethmalani with "wrinkles and scars".

Around 2009, after series of scams had broken out, the nation was under the grip of anti-corruption sentiments. The opposition revved up a narrative of black money stashed in off-shore accounts. BJP formed a four-member task force of S Gurumurthy, Prof Vaidyanathan of IIM Bangalore, Ajit Doval and Mahesh Jethmalani which reported that about Rs. 25 lakh crore is parked in these accounts. There were demands from the Government to take steps to bring back these monies.

After the report of the task force came out, Jethmalani filed a sketchy ten-page writ petition before the Supreme Court complaining of inaction by the Government to investigate and bring back the "stolen money" and alleging connivance of the Government in protecting the vested interest. Since Jethmalani was the petitioner, he needed a counsel to represent him in the Supreme Court. He contacted Divan and requested him to appear as his lawyer. Divan was circumspect as this case too, like Hawala, had loud political overtones and again Jethmalani was the architect and this time also a petitioner. Divan agreed to represent Jethmalani in the writ petition but on the condition that no names will be used either in the pleadings or during the arguments and Jethmalani would not accept a brief for a person who may be cited as an accused as a result of the proceedings in the petition. Jethmalani agreed unconditionally to both. Divan would later beef up the petition with additional written submissions, cautiously treading to ensure that politics is kept outside the court proceedings. Often, when the case would be listed for hearing, Jethmalani request Divan to take permission from the Court to allow him to speak as a petitioner-in-person. Divan would accede to the request, reminding Jethmalani of his promise that he will not refer to any names in his address and in a characteristic manner, would request to the court – "My Lord may permit my client, Mr Jethmalani to address the court". Much as he would have wanted, Jethmalani resisted all temptations to cite names in his address.

The Supreme Court in the year 2011, by an interim order constituted a Special Investigation Team which was mandated to oversee investigations and "initiate proceedings, for the purpose of bringing back unaccounted for monies unlawfully kept in bank accounts abroad".

Later, the issue of black money in off-shore accounts would become the signature tune of BJP's campaign in 2014 election. BJP swept the 2014 general elections. While the two architects of the SIT are in the other world, SIT is still groping in the dark to bring "back unaccounted for monies".

Jethmalani, indeed was a maverick of a lawyer but was also an astute client, who chose the most effective counsel for his cases.