The Myth And Reality Of Article 370 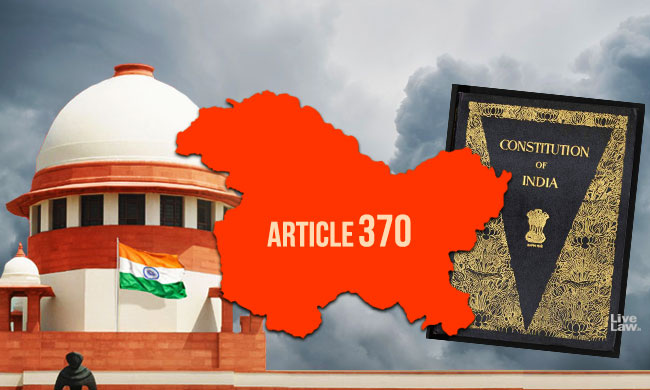 Article 370 has virtually ceased and is rendered redundant. The sound byte from top to bottom of the political rung was that since it was designed to be temporary, it has ceased. Reference in this regard is to the "Heading" given to Article 370. Some legal eagles also proclaimed that Article 370 is still existing with some "modifications and exceptions" as contemplated in...

Article 370 has virtually ceased and is rendered redundant. The sound byte from top to bottom of the political rung was that since it was designed to be temporary, it has ceased. Reference in this regard is to the "Heading" given to Article 370. Some legal eagles also proclaimed that Article 370 is still existing with some "modifications and exceptions" as contemplated in Article 370(3).

There can be no dispute that the provision is temporary or that it has not ceased completely. The first statement, however does not answer the basic issue, temporary in relation to what and why, while the second appears to be mere trickery. The question "why temporary" begs an answer primarily. Connected with this is the issue of status of the Constitution of Jammu and Kashmir and the "Constituent Assembly" that enacted it.

"Again the Government of India have committed themselves to the people of Kashmir in certain respects. They have committed themselves to the position that an opportunity would be given to the people of the State to decide for themselves whether they will remain with the Republic or wish to go out of it. We are also committed to ascertaining this will of the people by means of a plebiscite provided that peaceful and normal conditions are restored and the impartiality of the plebiscite could be guaranteed. We have also agreed that the will of the people, though the instrument of a constituent assembly, will determine the Constitution of the State as well as the sphere of Union jurisdiction over the State." Then again he observed;

"At present, the legislature which was known as the Praja Sabha in the State is dead. Neither that legislature nor a constituent assembly can be convoked or can function until complete peace comes to prevail in that State. We have therefore to deal with Government of the State which, as represented in its Council of Ministers, reflects the opinion of the largest political party in the State. Till a constituent assembly comes into being, only an interim arrangement is possible and not an arrangement which could at once be brought into line with the arrangement that exists in the case of the other States."

"Having provided for the legislative power of the Parliament and for the applications of the Article of the Constitution of the State, Article 370 cl. (2) prescribes that if the concurrence of the Government of the State required by the relevant sub-cls. of cl.(1) has been given before the Constituent Assembly of Kashmir has been convened, such concurrence shall be placed before such Assembly for such decision as it may take thereon. This clause shows that the Constitution-makers attached great importance to the final decision of the Constituent Assembly, and the continuance of the exercise of powers conferred on the Parliament and the President by the relevant temporary provisions of Article 370(1) is made conditional on the final approval by the said Constituent Assembly in the said matters". It was further observed by the Supreme Court that:-

"On the said construction the question which falls to be determined is: Do the provisions of Article 370(1) affect the plenary powers of the Maharaja in the matter of the Governance of the State? The effect of the application of the present article has to be judged in the light of its object and its terms considered in the context of the special features of the Constitutional relationship between the State and India. The Constitution-makers were obviously anxious that the said relationship should be finally determined by the Constituent Assembly of the State itself; that is the main basis for, and purport of the temporary provisions made by the present Article". Yet again it was stated:-

The whole exercise appears to be for some other reason and not for the reasons be once propagated. My reasonable guess is that the esteemed Law Officers of India may not have been involved at all. Besides, a line is also necessary for those esteemed lawyers who claim that Article 370 still survives, though with such exceptions and modification as enacted by the Presidential Order. They ignore the vital fact that Article 370 can neither be ceased nor modified/truncated except on the recommendation of the Constituent Assembly. There was an objective behind this provision. No sooner the Constitution of Jammu and Kashmir was enacted Article 370 lost its purpose. After enacting of its Constitution, the Assembly would then recommend to the President for a Presidential Order as contemplated in Article 370 (3). No other agency could do it. This was the clear intention of the framers. The entire exercise of power under Article 370 by the President is totally otiose and redundant.

It would be in fitness of things to complete the narration also by noticing another Constitution Bench [Sampath Prakash v. State of Jammu and Kashmir AIR 1970 SC 1118 ] which in my opinion held otherwise. It appears to be incorrect for three major reasons (a) it deals with pre 1956 facts and shape of Article 370, when admittedly Article 370 was the governing provision; (b) It clearly omits the views of the framers as indicated above and (c) it completely overlooks the earlier Constitution Bench and is therefore "per incurium".

(The author is a Senior Advocate at the Supreme Court. Views are personal)