The Revenge Strategy Of Uttar Pradesh : High Court Comes To Rescue Of Criticism And Protest 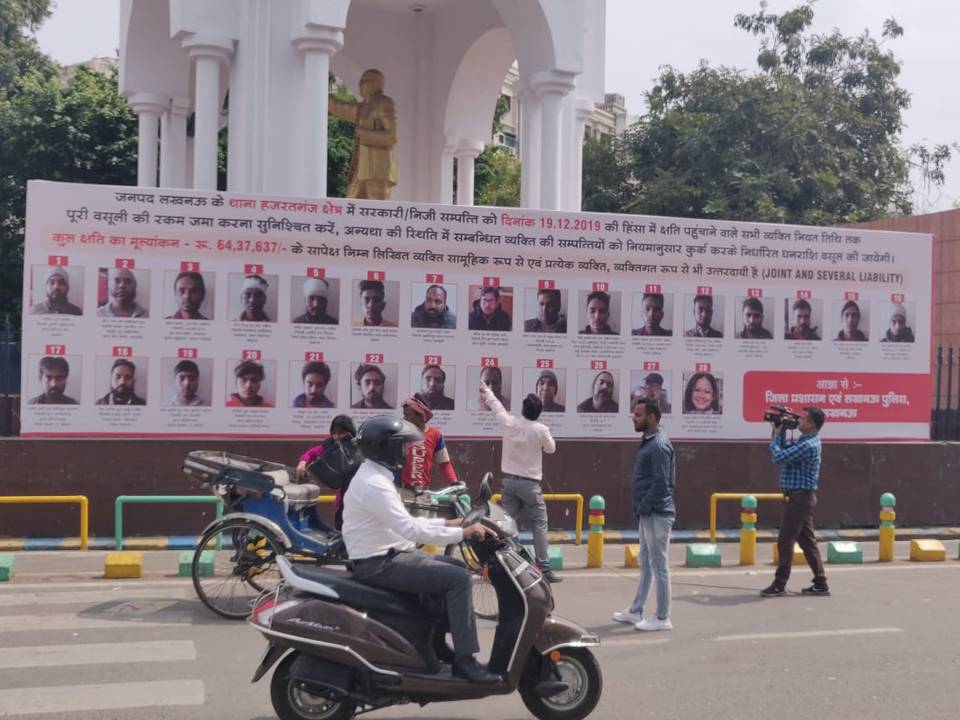 A new anti-democratic strategy has been introduced in the northern part of India, to frighten the 'criticism', threaten 'dissent' and suppress the 'protest' against the policies of the Government. After raising tensions, spreading hatred, and making people ready to fight each other, the address of the protestors along with their magnified photographs were publicised. UP Chief...

A new anti-democratic strategy has been introduced in the northern part of India, to frighten the 'criticism', threaten 'dissent' and suppress the 'protest' against the policies of the Government. After raising tensions, spreading hatred, and making people ready to fight each other, the address of the protestors along with their magnified photographs were publicised.

UP Chief Minister Yogi Adityanath reportedly directed such publishing of posters on the walls in the key centres of Lucknow. There is enough facilitation for insane rogues to attack their houses.

Generally speaking, yogis renunciate the world, they are above love, hate and revenge. But UP's Chief Minister Yogi is different. He thinks he can take revenge according to law and the Constitution of India. The CM desires that protestors should be put in fear, so that, they do not protest, even if protest, they should be threatened, prosecuted, properties should be confiscated by framed up charges, or lynched by mobs as enough identification and address details are made readily available on the walls of the capital city. Only GPS location is missing.

Protestors have committed grave crime! That 'crime' was to protest the controversial CAA, divisive NRC and doubting NPR. The state of Uttar Pradesh has foisted cases against protestors. Chief Minister Yogi said his Government would take revenge and punish protestors. It was thought to be an angry reaction of leader of BJP which brought this law.

It was not simple a reaction, as that was followed by lethal legal action. Hundreds of protestors who participated in a series of anti-CAA protests in UP have received recovery notices from the police asking them to pay compensation for the damage caused to the public property. The protestors have been considered as accused. BJP, their spokespersons, their supporting media and several other media called them as accused without there being any charge framed.

This was beginning of the revenge. Uttar Pradesh CM has bent upon to wreck against protestors. When the protestors were notified and demanded to pay compensation for causing loss to property, the regenge began. By then, the punishment is still awaited.

Authorities were asked to do a different act, which was unprecedented. The Lucknow authorities have put up roadside banners with photographs of people asked to pay compensation for damage to public property during anti-CAA protests. The big size photos of protestors were pasted on walls of Lucknow, their names, specific addresses were also given.

A government spokesman declared the posters have been up on the chief minister's directive at important intersections, including the main crossing in the busy Hazratganj area and in front of the Assembly building.

The banners came up at major road crossings in Lucknow late on 6th March night. Some activists who figure in the posters were contemplating go to court over the "public humiliation" when the charges against them are yet to be proved. Opposition parties questioned how can protestors be branded guilty or accused?

An activist, who was arrested and granted bail, said 'we are not absconding, appeared before court and police. They do not humiliate Vijay Mallya and Nirav Modi who fled with country's wealth by putting their posters at Airports.

"Our life, property and freedom have been put in jeopardy by putting up these posters and our reputation has been damaged," another protester lamented. One former officer said that he is writing to the state home secretary, director-general of police and police commissioner, telling them that if they faced any trouble because of the posters, it would the administration's responsibility. Will there be any response to this letter, from a Government which behaves in such irresponsible manner!

Samajwadi Party president Akhilesh Yadav raised a right question, how the government could publicly declare someone a culprit without a court order. Uttar Pradesh Congress Committee president Ajay Kumar Lallu said Chief Minister Yogi Adityanath himself is an accused, his photo should be published as poster first.

Lucknow District Magistrate Abhishek Prakash said three orders have been issued for recovery of damaged property worth Rs. 1.61 crore in four police station areas of the state capital. He said the recovery notices allow a 30-days period for their implementation. After this, the offenders' property will be confiscated. While this process is continuing, the posters are published.

What do Yogi want really? A clear provocation to physical attack coming from state authorities. Does it mean if some mad crowd goes and lynches the protestors, it has state sanction?

The fabric of society and people is under stress with atmosphere of emotional division with hatred being spread by those in power, speaking provocative language, killer slogans goli maro salonko songs besides gun totting insane youths. The lives of protestors are endangered. The criminal level of revenge of people's (!) government and its powered 'revenge' has shocked the millions. If Government thirsty of blood of protestors, for just protesting an unjust law, who will save the people and democracy?

This doubt has been also entertained by the judiciary, thanks to Allahabad High Court and division Bench which decided to question this divisive tendency by taking suo motu notice of this atrocity by state. The HC directed the Lucknow police commissioner Sujit Pandey and district magistrate Abhishek Prakash to appear in the court and explain the law under which the hoardings of 53 anti-CAA protesters were erected at the major intersections in the state capital.

The advocate general Raghvendra Singh appeared on the behalf of the Lucknow administration in the hearing that began at 3 pm on Sunday. The Court ordered immediate removal of all posters and hoardings naming those accused of violence during protests against the controversial citizenship law. The Court cited the Right to Privacy as a fundamental human right recognised by the United Nations as well as the Supreme Court, and held the government's move to display photographs and personal details of the accused on roadside hoardings was "an unwarranted interference in privacy". The HC also asked the administration to file a compliance report by March 16. With the order of Allahabad High Court the Yogi Adityanath government's "name and shame" campaign came to an abrupt halt.

The Allahabad High Court held a rare hearing on a Sunday, a court holiday. Senior advocate KK Rai, who attended the initial hearing at 10 am, said Chief Justice Govind Mathur along with Justice Ramesh Sinha had made some strong remarks on the issue, saying the government was "impinging on privacy, respect and freedom" and called it an "illegal move".

The Government contended that it was a "deterrent" action and the court should not interfere in such a matter and that the court "erred in invoking public interest jurisdiction". The bench retorted effectively saying, "Courts are meant to impart justice and no court can shut its eyes if a public unjust is happening just before it".

It is not about the "validity of the compensation fastened, but to the act about disclosure of personal details of the accused persons", judges questioned.

"In the present case, the cause is not about personal injury caused to the persons whose personal details are given in the banner but the injury caused to the precious constitutional value and its shameless depiction by the administration. The cause as such is undemocratic functioning of government agencies which are supposed to treat all members of public with respect and courtesy and at all time should behave in manner that upholds constitutional and democratic values," the judgment read.

"In entirety, we are having no doubt that the action of the state which is subject matter of this public interest litigation is nothing but an unwarranted interference in privacy of people," the high court observed, terming it a violation of Article 21 of the Constitution. The state of Uttar Pradesh is directed not to place such banners on roadside containing personal data of individuals without having authority of law, the judgment said.

Activist-politician Sadaf Jafar, who was one of the people named in the hoardings, welcomed the judgment, and said "the move of the court sets an example and "reinforces our faith in the country's constitution". "The damage is already done. This is a digital age. But this is a moral victory for us," said Deepak Kabir, theatre artist and another accused in the matter.

This order shows how the institution of judiciary is essential in this democratic country to save the people from atrocious behaviour of elected government, as if they have licence to do whatever comes to their mind without caring the rule of law and the Constitutional governance. This order is the effect of the power within the letters of Indian Constitution, brought out by the wisdom of the judges. The Court saved Lucknow from a gross violation of human rights and a mockery of democracy. Kudos to Judiciary.