The Right To Know About Criminal Contestants 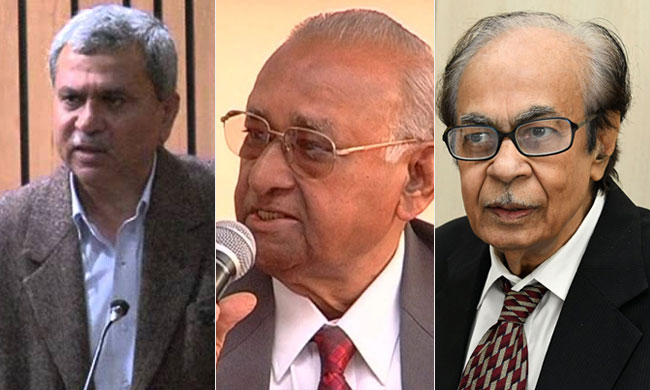 National Election Watch (NEW) and Association for Democratic Reforms (ADR) have analysed the self-sworn affidavits of 8163 candidates out of 8230 candidates who have contested in the Lok Sabha 2014 Elections and discovered: Candidates with Criminal Cases: Out of the 8163 candidates analysed, 1398 (17%) candidates have declared criminal cases against themselves. Out of 7810 candidates...

National Election Watch (NEW) and Association for Democratic Reforms (ADR) have analysed the self-sworn affidavits of 8163 candidates out of 8230 candidates who have contested in the Lok Sabha 2014 Elections and discovered:

All the voters now know that how many criminals are representing the people in Parliament and State Assemblies, thanks to the spirited democratic organizations like ADR, intellectual leaders like Prof Trilochan Sastry, socially relevant lawyers like PP Rao and Pro-people judges like P Venkatram Reddy. Because of their fight against entire political community in India, voter's right to information about contestants became an important constitutional right today. These three personalities along with their co-petitioners, advocates and judges.

In the context of International Women's' Day on 8th March ADR and NEW reported that only 9% women MLAs and MPs across the country in 2019. Hundreds of men who declared cases of crimes against women against them in their affidavits were given tickets by key political parties, with BJP giving the highest number of tickets at 54. According to the report, out of 1,642 (34%) MPs/ MLAs analysed with declared criminal cases, 52 have declared cases related to crimes against women. The second highest number of candidates, i.e. 37 accused in crimes against women were given tickets by BSP, followed by 30 candidates from INC had contested for Lok/Rajya Sabha and State Assemblies. Criminality is perhaps the qualification and quality to represent the people and govern the nation!

Neither any politician nor any political party was interested in telling the people about their candidates. No party is ready to share the criterion for selection of their candidate who is expected to represent the people and rule them. No party feels ashamed of to offer ticket to a person who crossed over to their party a night before. Some leaders wait with "B" form ready in hand for disgruntled leaders and persons, who could not procure ticket and hence defect into their party. Shameless! Whether BJP or Congress, Communists or others, the parties fight tooth and nail to be out of Right to Information Act. They never want to be transparent.

It was because of PIL by teacher (Trilochan Sastry), efficient argument by PP Rao and effective judgment by PV Rao, not because of any politicians, the candidates are now compelled to reveal their criminal, academic (if any) and wealth background. The ADR and PUCL filed a PIL before the High Court of Delhi seeking directions to make the electoral process in India more fair, transparent and equitable. The Government of India, in routine sought Law Commission to recommend and Law Commission, recommended, which the Government never cared to implement. The Election Commission, in its Constitutional responsibility, should have required all contesting candidates to disclose personal background information to the public, including criminal history, educational qualifications, personal financial details and other information necessary for judging a candidate's capacity and capability. It did not do until the Supreme Court mandated it and a law was forced upon. Ruling that a candidate's background should not be kept in the dark as it is not in the interest of democracy, the High Court of Delhi ordered the Election Commission to obtain such information for the benefit of the voters. The Union of India challenged the decision of High Court through an appeal to the Supreme Court of India, arguing that the Election Commission and the High Court did not have such powers and that voters did not have a right to such information. Shameless again!

Two significant rulings were given by the court: (1) When the legislature is silent on a particular subject and an entity (in this case, the Election Commission) has been granted implementation authority with respect to such subject, the Court assumes that the entity has the power to issue directions or orders to fill such a void until a suitable law on the subject is enacted; the Court confirmed that Article 324 "operates in areas unoccupied by legislation" and that "the silence of a statute has no exclusionary effect except where it flows from necessary implication". In other words, the Court's power to issue directions pursuant to Article 324 is plenary. By extension, the Election Commission, as ordered by the Court, can issue suitable directions to maintain the purity and transparency of the "entire process of election".

(2) Citizens have a right to know about public functionaries, which is derived from the concept of freedom of speech and expression and which includes the right to know about the backgrounds of candidates for public office. The Court characterized the right to know as a right derived from the right to freedom of speech and expression. The public has a right to know about candidates contesting elections because such rights include the right to hold opinions and acquire information so as to be sufficiently informed in forming and disseminating those opinions throughout the election process. The Court advanced this point by observing that a successful democracy strives toward an "aware citizenry" and misinformation or non-information of any kind will create an "uniformed citizenry which makes democracy a farce". The Court directed the EC to issue orders to compel each contestant to give information about criminal charges and convictions in the candidate's past, any pending cases in which the candidate is an accused, all assets of a candidate including those of his/her spouse, all liabilities of a candidate, and all educational qualifications of a candidate.

The judicial wisdom did not appear to be democratic wisdom for the politicians ruling India during December 2002. Led by Prime Minister Atal Behari Vajpayee, they responded to the judgment, by amending Representation of the People Act, that required a candidate for office to provide information "as to whether he is accused [or convicted] of any offence punishable with imprisonment for two years or more in a pending case" (Section 33A). Most important is S 33B: No candidate could be compelled to disclose any additional information, including educational qualifications and assets and liabilities, "notwithstanding anything contained in the judgment of any court or directions issued by the Election Commission". Shameless Again! This is the real face of political parties, whether BJP or Congress, Left or Center. Again the Supreme Court examined the constitutional validity of Section 33B in the case Union for Civil Liberties and Another (PUCL) v. Union of India and Another.

Justice P Venkatram Reddy in 2003 Judgment of Supreme Court held: Section 33B inserted by the Representation of People (3 rd Amendment) Act, 2002 does not pass the test of constitutionality firstly for the reason that it imposes blanket ban on dissemination of information other than that spelt out in the enactment irrespective of the need of the hour and the future exigencies and expedients and secondly for the reason that the ban operates despite the fact that the disclosure of information now provided for is deficient and inadequate.

Because of this order, today every candidate is explaining his background through an affidavit. It is now the duty of voter to think over whether he is knowingly voting a criminal, or a bankrupt/corrupt, or uneducated criminal or educated leader or one, who claims to have a false degree! Dear Voters, Let us not elect criminals.