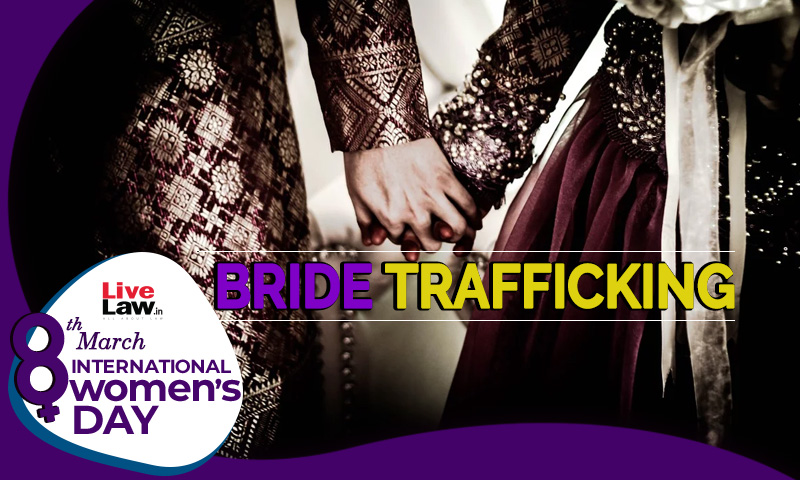 "We cannot all succeed when half of us are held back" – Malala Yousafzai While marriage remains to be a solemn and sacred institution in India whereby consent of the two partners is the touchstone, the odious practice of bride trafficking has its roots well established wherein the fundamental and most basic human rights of the trafficked females are utterly...

While marriage remains to be a solemn and sacred institution in India whereby consent of the two partners is the touchstone, the odious practice of bride trafficking has its roots well established wherein the fundamental and most basic human rights of the trafficked females are utterly violated. According to the 2016 National Crime Records Bureau, 33,855 people were kidnapped or abducted for the purpose of marriage and half were under the age of 18.

This article attempts to bring into light the sheer infringement of rights of the thousands of females who are treated no less than commodities as they are obtained by illicit means of kidnapping, abduction, coercion or purchasing and further sold for the purpose of marriage.

Marriage is considered as a sacred institution in India and is more of a social expectation and compulsion forced on every individual on the basis of age. Therefore, any act done by an individual for the purpose of getting married or during the existence of a valid marriage is asserted with an undue veil of morality in India. For instance, the heinous issue of marital rape still continues to lack any solid legislative framework or legal development as the act of rape is committed during the continuance of a valid marriage which is regarded with a sacrosanct nature wherein the consent of wife is not considered. Similarly, the practice of bride trafficking is often considered as an act wherein the grooms who are unable to find a bride are set up with a bride whom he marries, thereby letting the practice of bride trafficking attain a moral connotation.

The misogynistic and male-dominant ideologies prevalent across the nation enable trafficking of women in the name of marriage. Thousands of young girls and women across the nation are trafficked and pushed into slavery, forced labor as well as marriage. Weak socio-economic condition of the nation combined with skewed female population remain as the major factors aggravating the heinous crime of bride trafficking.

The stark humiliation and gender abuse faced by the females across the country due to patriarchal violence in the name of marriage adds as a specific form of human trafficking practiced in India. Despite of the practice of bride trafficking possessing all forms of immorality, it is asserted with the protective veil of being a practice whereby brokers and middlemen arrange for brides for marriages. This veil of morality certainly needs to be lifted and the severe human rights violation needs to be exposed, so as to restore such females with their most fundamental rights of liberty and freedom.

The Constitution of India is the Supreme framework which gains structure from its Preamble which assures that all citizens of India shall enjoy justice, equality and liberty regardless of any bias on the basis of caste, class, gender, etc.. Article 14, 19 and 21 of the Constitution altogether form the golden triangle which lays down the touchstone of prevalence of human rights in India and protect all citizens of India from any inhumane or oppressive treatment. Most importantly, Article 23 read with Article 21 that guarantees that the life and personal liberty of any individual shall not be hampered by another individual by means of objectification and sale, purchase or exchange of something as precious as human life.

Besides the Constitution of India which supremely puts a blanket prohibition over any form of trafficking, the Indian Penal Code, 1860 which forms the basis of criminal jurisprudence in India, by means of Section 366A, 366B, 370, 370A, 371, 372, 373 and 374 strengthens the constitutional mandate prohibiting the sale, purchase or exchange of human life for any purpose.

Trafficking of any form is severe violation of human rights of an individual as it abruptly takes away all liberty and freedom from an individual and leads to humiliation of such individual physically as well as mentally. However, bride trafficking is a social evil which involves the procurement of women by illicit means, objectification of trafficked women, forceful marriage, physical assault and mental traumatisation of such women by traffickers as well as husbands. A 2013 UN Office on Drug and Crime report highlighted that women trafficked for forced marriage are "exploited, denied basic rights, duplicated as maids and eventually abandoned". Many of these women are even resold as per the whims and fancies of their buyer. Surprisingly, not only female adults, but even minor girl children are trafficked for the purpose of marriage, thereby leading to an aggravated crime or trafficking as well as child marriage.

Unfortunately, this heinous practice is not geographically confined to limited parts of India, but has proliferated to most parts of the country, excessively being practiced intra and cross-border from the range of Assam to Himachal Pradesh. A majority of trafficked females, commonly referred to as "Paro" or "Mol-ki-bahu", are procured from poor families of Uttarakhand, Bihar, Madhya Pradesh, West Bengal, Jharkhand, and Orissa. The agents and middlemen involved in this flesh trade aid this atrocious practice for money by providing grooms with trafficked girls who are forcefully turned into brides and further victimised.

The social issue of bride trafficking leads to human rights violation at a colossal level and females, especially in rural areas of India, are massively being victimised in this heinous practice. This calls for some major steps that must be taken for the redressal of this social evil. Although the Constitution of India addresses the problem of trafficking in a blanket manner and prohibits it in any form and for any purpose, but a special legislation regarding this subject must be enacted by the legislature. Such a specialised legislation is the need of the hour which should explicitly address bride trafficking in order to make people aware that any illicit act committed in furtherance of a marriage is forbidden by law. The Supreme Court of India, should suo motu initiate action and issue suggestive measures with regard to eradication of this social evil. Strict punitive measures must be suggested and enforced by the Apex Court so as to disable the continuance of this practice.

International agencies must also participate vividly in the protection of females from bride trafficking and forceful marriages. India being a signatory to Convention on the Elimination of all Forms of Discrimination against Women (CEDAW) has ratified the principles of such convention, which supremely includes the protection of women and enabling the enjoyment of all human rights by females. Other national bodies, especially the National Human Rights Commission (NHRC) should engage in raising awareness by means of publications, workshops and reformative sessions about this issue so that more and more women turn up with their cases of violation of human rights, thereby igniting a wave of change in the society. This would enable the change of thought in the society at large so as to lead the people to a direction where human rights are equally enjoyed by both men as well as women.
TagsBride Trafficking International Women
Next Story
Similar Posts
+ View more
Law Firms
+ More