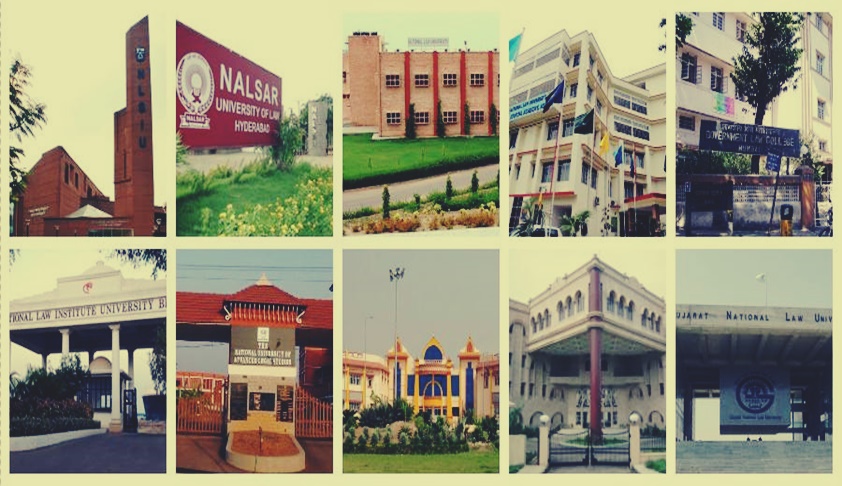 x
Agenda before the Vice-Chancellors Conference

The Chief Justice of India (CJI), a Visitor to all National Law Universities in India, has decided to convene a Conference of Vice Chancellors on 14th September to look into the state of affairs at NLUs in terms of their performance, courses on offer and other pursuits for which they have been established. While it would be premature to comment upon the outcome of this interaction,...

The Chief Justice of India (CJI), a Visitor to all National Law Universities in India, has decided to convene a Conference of Vice Chancellors on 14th September to look into the state of affairs at NLUs in terms of their performance, courses on offer and other pursuits for which they have been established. While it would be premature to comment upon the outcome of this interaction, it certainly brings the NLUs into focus.

The NLU movement started in India with the establishment of NLSIU, Bangalore in 1986. Twenty-five NLU's have been established across almost all states in India since then. The respective state governments have spent a considerable amount to create these institutions and, by and large, NLUs have state of art infrastructure and facilities. The core objective of this movement was to create laws schools with an equal footing of IITs and IIMs to create professional lawyers by transforming legal education in the country. Despite being smaller in comparative terms, the NLUs offered a model for legal education in their coverage of students. Irrespective of praises or criticisms, the discourse on legal education in India revolves around them.

The landscape of NLUs is highly diverse and complex. All NLUs cannot be described through a single statement given that all NLUs are not alike. For instance, some of the NLUs are student-intensive where both the excellence and the activism stem from student initiatives. The NLUs in such case are known for the performance of the students which results into good placements. The other category of law schools are faculty-intensive ones. The faculty in these NLUs have conducted remarkable research and brought significant credit to themselves and the institutions. There are also teaching-intensive and research-intensive law schools which tend to focus on their respective areas and have become known accordingly.

Given the recent trends, it can be stated that NLUs are bound to face grave challenges in governance forcing the leaders to bring significant structural reforms at various levels in the times to come. The student requirements vis-a-vis faculty and administration are sure to culminate into a major test requiring drastic structural modifications. Pedagogies and curriculum are likely to be debated more fiercely by the stakeholders and market demands will push the leaders to alter the methodologies in the NLUs.

Two dichotomies are likely to emerge very soon where one would be forcing the change from market-based demands to change the complexion of law school and the other, surprisingly enough, would attract serious scholarship in public law centering around social issues. Resource crunch in many NLUs will increase with state withdrawing and expenditures multiplying. This will give rise to new entrepreneurship for generating resources. The NLUs which show character and boldness in effectuating change are likely to fare well. These developments are not pathological signs rather they are the indicators of an evolving system.

It then becomes pertinent to see as to how leadership responds to it. The pace of change in NLUs is often bewildering and appears to be disrupting settled practices. To exemplify, the cosmopolitan and multifaceted nature of student life in NLUs often tends to become suspect when viewed from conventional lenses. Any administrative attempts to regulate the same, however, throws up more problems than it solves. The management of change, therefore, is an art that NLUs need to master rapidly.

As against this backdrop, the agenda before the CJI Conference with all VCs of NLUs must focus on the following issues:

The first issue is that of leadership. Many NLUs in the recent pass witnessed student-led protests which largely stemmed from the inability of the administration to resolve the day to day issues pertaining to students, staff and faculty. Even though the mechanisms to address such concerns are in place, the inability to anticipate problems and timely use of the mechanism often results in confrontational situations. Procrastinating decisions, rather than taking them, may appear to be a momentary solution but in the long run, it causes serious instability.

There is an urgent need to reform the process of appointment of vice-chancellors to NLUs. The conventional methods of appointing VCs may seem convenient, however, in view of the changing demands of NLUs, this needs to be significantly reformed. The need is to appoint VCs who are conversant with new methodologies of teaching, learning and human resource management with the ability to transform the law school in a time bound manner with visible outcomes. A wider search committee going beyond the members of legal discipline is imperative in this case. The same is in line with the challenges that law schools in the country are likely to face in the future.

The second issue is that of quality of faculty. In a setting where the talented students expect much more than contemporary ways and means for the dissemination of information and knowledge, the faculty invariably lacks on account of their altogether different training and orientation. This disjuncture needs to be narrowed by deploying adequate measures. The implanting of faculty holding foreign degrees is not the only way in this regard. The credibility crisis of faculty is a factor afflicting almost all NLUs. A plan of action on this ground is urgently needed.

The UGC-driven framework has been found to be highly restrictive in attracting genuine talent. The need is for appointment of separate faculty for teaching and research. This separation can work to achieve more focus while the two types can always overlap. Also a mechanism to incentivise both the teaching and research ought to be considered. NLUs need to search for answers of their being socially relevant by focusing on the local issues and priorities both in their curriculum as well as research engagements.

The third issue involves concerns such as mental health, social and gender aspects. NLUs are ill-equipped to address such concerns. Students from socially weaker sections often have difficulties in coping with the standards of education. In the event of a failure, they often tend to become frustrated and get depressed. While some NLUs have support systems such as counselling etc., much thought is required in this direction to ensure a comprehensive mental health programme for the NLUs. The mental health on the campus is, admittedly, shaping into a serious issue. Governance in NLUs generally lacks a comprehensive programme to deal with it. Besides, addressing gender related issues including sexual harassment are just as crucial to administration of NLUs. Mere criminalisation is not a solution.

Fourthly, it has been found that NLUs are not as rigidly regulated as their counterparts in other professions. In many ways, this has given boost to unleashing scholarship and provided free spaces to foster frank articulation of complex issues. Without being an advocate of regulatory systems, I hasten to add that the NLUs, being very young, have failed to utilise this freedom in a correct direction. Lack of minimum regulation and objective monitoring tends to reflect in the curriculum, teaching methods, pedagogy, syllabus, student evaluation related issues on the part of faculty.

Consciously, as the governance in most NLUs has been concentrated with the Vice Chancellors, there is no step to step facilitation of the necessary compliances ensuring quality of syllabi or pedagogy. There is hardly any command structure below the VC in the NLUs which tends to deprive young faculty of the opportunity of guidance by seniors in a hierarchical sense.

Fifthly, the journey of excellence of all NLUs has been highly diversified. It is high time that each NLU must identify its area of speciality as it happens in the U.K. where the Departments are known for their specialisation. However, no such vision has been found to move in this direction.

Sixth, it is equally important to understand that needs of the undergraduate students are different from that of post graduate students. The former need intensive practical training beside a basic orientation of law while the latter require an academically rigorous course. In the current state, however, practical training through placement and clinics including vetted skill programme for UG students is losing it sheen eve as the PG (LL. M.) course in most cases is being considered a failure as most NLUs fail to provide suitable faculty for that purpose.

It is just as true that NLUs are carrying the burden of heightened expectations. They have a typical mix of new and old. They struggle to combine modern outlook with traditional values. They are tasked with a role which is confusing in terms of set priorities. To exemplify, it is ironical that NLUs are criticized when they achieve success in terms of corporate placements even as corporate placements becomes the golden standard for judging success. There is a dearth of ideals for NLUs to follow. While the aims of NLUs is known in material terms by all, only a few can actually visualise the outcome based performance of NLUs. Many NLUs today seem to be on auto-pilot mode. While they are sure to achieve at least minimum with the combination that they have, the much needed acceleration in their achievements can no longer be left to randomness.

If NLUs are to be supported and guided with a mission, a think tank to guide the course of legal education and research is highly imperative. Something like Indian Council of Legal Research can be one way to actualise it. This will also help relieve the Bar Council of India from the regulation of legal education. Most NLUs are in need of taking the next logical step. From merely being a teaching University to become a research-intensive institution catering to training of stakeholders and offering consultancy to policy discourse would be a vision to achieve soon.

The state governments seem to have forgotten the NLUs after having established them. The State can be a vital instrument in NLUs specially facilitating them to open off-campuses and involving them with policy and practice linked assignments. In many states the lack of support of the state governments has caused considerable impediment. The case of NLU Delhi is a case in point.

The plan to incubate future faculty is also the responsibility of NLUs. Quality LL.M and Ph.D. programmes can go a very long way in this direction. Barring a few, most NLUs have a huge scope to improve in this aspect. This is one area which, given the lack of investment, does not seem to have a scope of improvement in the near future. Similarly, all NLUs so far have not develop useful linkages with best law schools in other countries to benefit their own students and faculty. All these issues cannot be handled randomly unless there is vision, plan and action strategies. NLUs seem ready to excel, the need is to remove roadblocks ruthlessly.

Lastly, monitoring and evaluation of NLUs who have at least completed five years of their existence is needed urgently as the same is perhaps not indicated enough by macro measures like NIRF or NAAC.

While some points in introspection have been made in this paper, the contribution of NLUs and those whose leadership steered these institutions from their initial years to transform them into world-class intuitions, can never be underestimated.

The author is Professor at National Law University Delhi. Views are strictly personal.