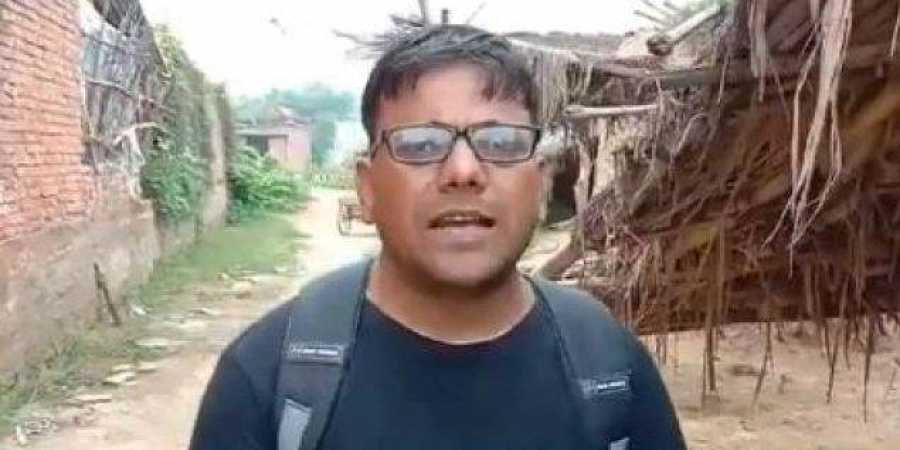 Last week, Uttar Pradesh government booked a Hindi newspaper journalist, Pawan Jaiswal, on the charges of "conspiracy" to defame the state government. The journalist had reported few days ago, that students at a government primary school in Mirzapur district were being fed only rotis and salt as their mid-day meal under a flagship nutrition scheme of the central government. According...

Last week, Uttar Pradesh government booked a Hindi newspaper journalist, Pawan Jaiswal, on the charges of "conspiracy" to defame the state government. The journalist had reported few days ago, that students at a government primary school in Mirzapur district were being fed only rotis and salt as their mid-day meal under a flagship nutrition scheme of the central government.

According to the scheme, children in government-aided primary schools are to be served pulses, rice, rotis and vegetables (fruits and milk also to be served on some days) to ensure that each child receives a minimum of 450 calories per day. The scheme was launched around two decades ago with the objective of providing nutritional support to children, while also encouraging poor children, belonging to disadvantaged sections, to enroll in schools, attend school more regularly and help them concentrate on classroom activities.

The scheme is a classic example of the public welfare initiatives taken to improve the access to education, healthcare and nutrition, which in turn have the capability to influence and enhance an individual's substantive freedom to live a better life. In their book "An Uncertain Glory" (2013), Jean Dreze and Amartya Sen have highlighted the importance of efficient public services as follows: "Well-functioning public services, especially (but not only) in fields such as education and health, are also critical in fostering participatory growth as well as in ensuring that growth leads to rapid improvements in people's living conditions". Without proper implementation, such public schemes won't have much impact.

History around the world shows that whenever governments have tried to prevent flow of information, it has caused severe repercussions. For instance, in his celebrated book "The Idea of Justice" (2009), Amartya Sen has pointed out the Bengal famine of 1943 "was made viable not only by the lack of democracy in colonial India but also by severe restrictions on reporting and criticism imposed on the Indian press, and the voluntary practice of 'silence' on the famine that the British-owned media chose to follow". In contrast to this, the flow of information can lead to active measures to prevent any negative occurrence. The famine in Maharashtra in 1973 was prevented by engaging five million people in rapidly organized public projects, after the drought had caused the drastic reduction in food production in the state.

It is therefore necessary to scrutinize the actions of the governments and question their failures in enhancing the lives of citizens. Pawan Jaiswal was just doing his professional job of reporting the discrepancies. In a democracy, his work highlights the constant need of accountability of the public system and reflects social engagement with transparency. Questioning or scrutinizing the government does not mean defaming it.

In this regard, in its nine-judge Bench judgment upholding the right to privacy, the Supreme Court had held: "… it must be realised that it is the right to question, the right to scrutinize and the right to dissent which enables an informed citizenry to scrutinize the actions of government. Those who are governed are entitled to question those who govern, about the discharge of their constitutional duties including in the provision ofsocio-economic welfare benefits. The power to scrutinize and to reason enables the citizens of a democratic polity to make informed decisions on basic issues which govern their rights".

It was further held: "Capture of social welfare benefits can be obviated only when political systems are transparent and when there is a free flow of information. Opacity enures to the benefit of those who monopolize scarce economic resources. On the other hand, conditions where civil and political freedoms flourish ensure that governmental policies are subjected to critique and assessment. It is this scrutiny which sub-serves the purpose of ensuring that socio-economic benefits actually permeate to the underprivileged for whom they are meant".

What happened with the children in the primary school of Mirzapur was not because of lack of resources, but because of lack of political engagement. The state government must understand that in order to prevent such incidents in future, it needs to bring accountability in its system. The government must create a strong monitoring mechanism for checking the implementation of public projects. Without creating an atmosphere of transparency and public accountability, the benefits of schemes like mid-day meal will never reach its targeted beneficiaries — school children in this case. Targeting the journalist who raised the issue is completely opposite. The FIR against the journalist is a direct attack on transparency and democratic accountability. The government must take back its charges against the journalist.

(Anurag Bhaskar is a Lucknow-based lawyer. After graduating from Dr. Ram Manohar Lohiya National Law University, Lucknow in 2017, he finished his LLM degree from Harvard Law School, USA in May 2019. He tweets at @anuragbhaskar_ )