Why Conviction Of Vaiko In Sedition Case Is Problematic? 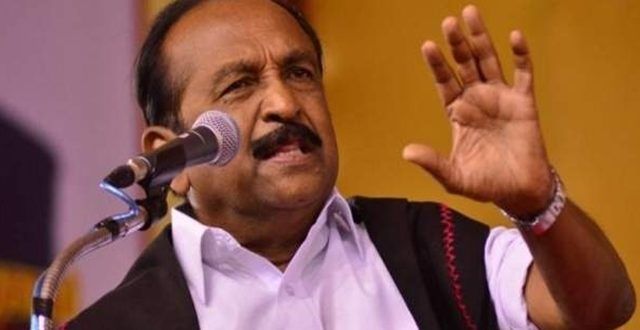 x
The judgment is based on a literal application of the provision, without taking into account the judgments of the Supreme Court which have narrowed down the scope of Section 124A IPC

Though heavily criticized by the proponents of civil liberties, and also by the Law Commission of India which recommended its repeal on the ground that the provision is most often used as tool to suppress political dissent, it is very rarely that we see a conviction for sedition under Section 124A of the Indian Penal Code.A Sessions Court in Chennai on Friday convicted Vaiko, a Tamil...

Though heavily criticized by the proponents of civil liberties, and also by the Law Commission of India which recommended its repeal on the ground that the provision is most often used as tool to suppress political dissent, it is very rarely that we see a conviction for sedition under Section 124A of the Indian Penal Code.

A Sessions Court in Chennai on Friday convicted Vaiko, a Tamil politician and leader of MDMK, for sedition and sentenced him to one year imprisonment for his pro-LTTE speech in 2009.

Sessions Judge J Shanti held that the Vaiko's speech brought "hatred and disaffection against Government established by law in India" and had the "tendency to create disorder". His statements were not expression of disapprobation of the measures of the Government with a view to their improvement or alteration, said the Judge while upholding the charge of sedition.

Unfortunately, the judgment is based on a literal application of the provision, without taking into account the judgments of the Supreme Court which have narrowed down the scope of Section 124A IPC. The verdict is way out of sync with the latest developments in free speech law (Shreya Singhal, Puttaswamy cases), which expanded the liberties of an individual and placed heavy burden on the State for imposing restrictions on them.

What is the case about?

Vaiko is the founder and leader of Marumalarchi Dravida Munnetra Kazhagam(MDMK), which follows a brand of politics asserting Dravidian identity and Tamil nationalism.

As a firebrand leader, Vaiko has stoked many controversies. In July 2009, two months after the killing of Liberation Tigers of Tamil Ealam (LTTE) leader Velupillai Prabhakaran by Sri Lankan forces, Vaiko held a function in Chennai for releasing his book written in Tamil titled "I Accuse".

The book was critical of the Indian government's approach towards the issue of Tamils in Sri Lanka. Addressing a gathering of 700 people, Vaiko made a fiery speech accusing Indian Government of destroying the cause of Tamil Ealam in Lanka. He termed Indian Government a "traitor" for supporting the Lankan forces to defeat LTTE.  He added that Tamil people will not forgive Indian Government for supporting "atrocities" against Tamils.  The then Lankan President Mahinda Rajapaksa is guilty of war crimes and he will be taken to the United Nations, Vaiko asserted during his speech.

An intelligence officer of Tamil Nadu police who attended the meeting made a complaint that the Vaiko's speech was seditious in nature and was capable of creating law and order issues. Based on this, FIR was registered.

The Sessions Court went by the literal wordings of Section 124A IPC and said that "whoever excites disaffection against the government" is covered under the provision.

The judgment indeed referred to the SC judgment in Kedar Nath Singh v State of Bihar(1962), which had read down the provision.  The SC had held that the application of the provision should be limited to "acts involving intention or tendency to create disorder, or disturbance of law and order; or incitement to violence".

Vaiko's speech had the "tendency to create disorder" and was therefore covered under the situations mentioned in Kedar Nath case, concluded the Sessions Judge.

However, the judgment did not refer to the subsequent cases of the Supreme Court, which had further deliberated on the Kedar Nath tests for sedition, by laying down more concrete yardsticks.

Test of imminence not applied

The Sessions Judge missed to refer the SC decision in 1995 case Balwant Singh and another v State of Punjab, where the abstract test laid down in Kedar Nath was applied.

There, the SC was considering the appeals against conviction under Section 124A for raising pro-Khalisthan slogans. Apart from raising slogans, they had not done anything further.

"It appears to us that the raising some slogan only a couple of times by the two lonesome appellants, which neither evoked any response nor any reaction from any one in the public can neither attract the provisions of Section 124A or Section 153A IPC. Some more overt act was required to bring home the charge to the two appellants", observed the bench of Justices Dr A S Anand and Faizan Uddin.

Acquitting the accused, the Court observed "we find it difficult to hold that upon the raising of such casual slogans, a couple of times without any other act whatsoever the charge of sedition can be founded".

Not only did the Sessions Court fail to advert to Balwant Singh, but also it reached a conclusion contrary to the SC precedent.

This finding was in response to the defense argument that the gathering of nearly 700 persons did not resort to any violence after Vaiko's speech.

It can be seen that the situation is somewhat similar to Balwant Singh case, where the accused had made the slogans when the situation was volatile following the Operation Bluestar in 1984. However, in the instant case, the approach of the Sessions Judge was contrary to the SC precedent. It said that the speech, which was made two months after the killing of key LTTE persons in the island nation, cannot be "taken lightly" from its timing and occasion.

The judgment also failed to appreciate that the SC had imported the 'doctrine of imminence' to further qualify incitement.

In Arup Bhuyan vs State of Assam(2011), the Supreme Court imported the test of imminence laid down in the US decision Brandenburg vs. State of Ohio, which held that advocacy of violence as a means of accomplishing political or institutional reform will be illegal only if it incites imminent lawless action.

It can be gathered from these line of judgement that the mere act of raising anti-national slogans, without any overt violent act, or incitement of imminent violence will not amount to sedition. The judgment in Balwant Singh case has also laid down the additional test of examining the response the alleged act has evoked in public.

Ignoring all these principles, the Sessions Judge observed : "No overt act is required for the commission of the crime. Mere advocacy alone which is likely to incite is the essence of the crime".

Instead of going by objective criteria to assess incitement, the Court seems to have got carried away by its own subjective opinion regarding the views aired by Vaiko.

Are mere statements against government seditious?

Relevant in this context is a recent judgment of the High Court of Kerala in Union of India vs Shameer which held that mere statements against government or military is not seditious. It was a judgment in a criminal appeal, which acquitted five persons who were convicted by NIA court for allegedly organizing a meeting of SIMI.

The accused persons had allegedly said in the meeting that Indian government was torturing Muslims and had appealed to fight against it.

Overturning the NIA Court's conviction, the Division Bench held that even if assuming that the statements were made, offence of sedition was not attracted.

"On a bare reading of Section 124A, it is rather clear that merely making a statement against Government of India or military will not become sedition", it said.

The Court added that the accused might be wrong in their views; but that cannot be a reason to slap sedition charges on them. This judgment was cited by the defense in the Vaiko case. However, the Court did not discuss its implications, though the fact situation was similar in both the cases.

The offence of sedition is political in nature, as it is invariably used against those positioned against the views of the Government. The section was used by the British to target the leaders of Indian independence movement.

In Kedar Nath, the SC had taken note of historic abuse of sedition law.

In the complex web of Indian nationalism, which is an inconvenient mix of diverse and often competing interests of sub-nationalism, sedition law is dangerous for its potential to be used as a tool of oppression to assert the will of dominant majority by effacing all other narratives.

Recently, several leaders of Assam were slapped with sedition for their protests against Citizenship amendment bill. Despite the SC decisions, the trend of invoking sedition against those who speak strongly against power and ventilate unpopular views is on the rise.

Vaiko case is a strong reminder that sedition law should be done away at the earliest.