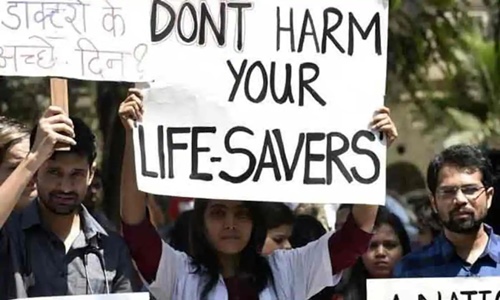 WHY A CENTRAL LAW? The Indian Medical Association ( IMA) has repeatedly appealed to the central government to draft a comprehensive Central law for the protection of doctors against assault and violence which is on the rise in recent times. The Association's Reasons for drafting a Central law was that it would be a 'deterrent' and the need for such a law was that it...

WHY A CENTRAL LAW?

The Indian Medical Association ( IMA) has repeatedly appealed to the central government to draft a comprehensive Central law for the protection of doctors against assault and violence which is on the rise in recent times. The Association's Reasons for drafting a Central law was that it would be a 'deterrent' and the need for such a law was that it should provide adequate security measures and determinants that would curb acts of violence against medical professionals and that exemplary punishment should be awarded to perpetrators of violence and to achieve this the IPC and CrPC has to be amended along with the enacting a law protecting medical professionals from any kind of violence or assault.

The Ministry for Health and Family Welfare has drafted the 'Healthcare Service Personnel and Clinical Establishments (Protection of violence and damage to property) Bill 2019 and is open to the general public to give feedback on the bill available on the Ministry's website.

The Constitution of India provides a federal structure that distributes the Legislative, Executive and Judicial powers between the Union and the States. The Constitutional provisions with regard to the distribution of Legislative powers ( Lawmaking powers) between the Union and its Units are provided under Articles 245 to 254. Synchronous to these articles is the seventh schedule that provides three lists ( List I, II, III). The union list ( List I ) provides a list of subjects the Parliament can legislate on. The state list ( list II ) provides subjects that states can legislate on and the concurrent list ( List III) provides for subjects that both the states as well as the Union can legislate on.

CAN THE PARLIAMENT MAKE LAWS ON STATE SUBJECT?

Under article 249 of the Constitution of India, the Parliament may legislate with regard to any subject in the state list (list II) of the seventh schedule if the Rajya Sabha has by resolution (supported by not less than ⅔ rd of the members present and voting), feels that the center has to enact a law in 'National interest'. The center under entry 26 of the concurrent list which specifies 'legal, Medical and other professions' can enact laws for states.

MINISTRY INCHARGE FOR HEALTHCARE IN INDIA?

The Ministry of Health and Family Welfare has drafted a Bill called 'Healthcare service personnel and clinical establishments ( prohibition of violence and damage to property ) Act, 2019'. The draft Bill is available on the website of the Ministry of Health and Family Welfare and is open to suggestions from the public. Under reasons for the enactment of the Law, the main reason was an increase in violence against medical professionals which has resulted in hindrance to the Healthcare services, The reasons for enacting the bill is 3-fold:

A PERUSAL OF THE BILL:

THE ACT IS CALLED; ' Healthcare service personal and clinical establishments ( prohibition of violence and damage to property) Act, 2019.

APPLICATION OF THE LAW:

SALIENT FEATURES OF THE ACT;

DRAWBACKS OF THE PROPOSED BILL:

Whilst the Bill to prevent violence against doctors proposed by the Ministry of health and family welfare is a well-conceived and well-crafted piece of legislation is not free from pitfalls. One of the basic questions that arise is WHY should the Central Government draft a Bill when many States have enacted the same law? In furtherance to this one wonders how the central law can be enforced when the 'Police' and 'Public Order' are State subjects. While the Bill covers almost all medical personnel, many involved in medical allied services, like Blood/ eye/ organ banks, NGOs working closely with hospitals, physiotherapists, and nutrition science professionals are not listed.

Sections 349 to 358 of the Indian Penal Code deals with 'Criminal force and Assault' and also prescribes punishments for the same. These sections in the IPC provide sufficiently against criminal force and assault. The next obvious question that arises is when a general penal law provides for punishments for assaults, is there a need for further laws to be enacted? But the question of compensation for either violence against a person or property needs to be dealt with under civil law which justifies the enactment of a law.

Is the said law a panacea for the existing problem? THE WAY FORWARD: