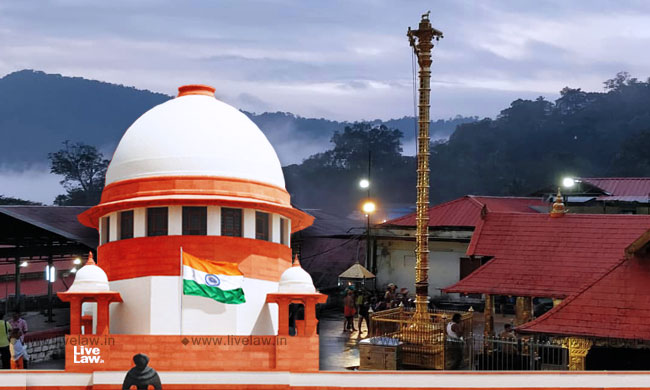 Article 137 of the Constitution of India allows the Supreme Court to "review" any judgment passed by it. According to the jurisprudence of the Court, a review is to be granted in exceedingly rare circumstances. In Union of India v Sandur Manganese and Iron Ores Ltd., for example, the Supreme Court restated the position of law as follows: a review could only be allowed in cases of "discovery...

Article 137 of the Constitution of India allows the Supreme Court to "review" any judgment passed by it. According to the jurisprudence of the Court, a review is to be granted in exceedingly rare circumstances. In Union of India v Sandur Manganese and Iron Ores Ltd., for example, the Supreme Court restated the position of law as follows: a review could only be allowed in cases of "discovery of new and important … evidence", an "error on the face of the record", or another "sufficient reason" that had to be analogous to the first two.

In this context, today's order in Kantaru Rajeevaru v Indian Young Lawyers' Association, concerning the Supreme Court's 2018 judgment in the Sabarimala Case, is a curious one. The Chief Justice begins his order by observing:

Ordinarily, review petitions ought to proceed on the principle predicated in Order XLVII in Part IV of the Supreme Court Rules, 2013. However, along with review petitions several fresh writ petitions have been filed as a fall out of the judgment under review. All these petitions were heard together in the open Court. (paragraph 1)

This is bewildering. Let us say that there are two sets of petitions before the Court. One set of petition seeks "review" of the impugned judgment, on the grounds set out at the beginning of this post. The other set comprises of fresh writ petitions that assail the correctness of the same judgment. "Hearing them together in open Court" makes no sense, because not only is the scope of arguments entirely different, the forum within which these cases have to be heard is different too! A review is heard by the same judges who delivered the original judgment (apart from those who may have retired). In this case, as the Sabarimala judgment was heard by a bench of five judges, the review would also be heard by five judges (and in this case, four of them – apart from the Chief Justice – were parties to the original judgment). A fresh writ petition, on the other hand, would have to go through an entirely different process: it would first come up before a division bench (two or three judges) of the Supreme Court, where the petitioner would have to make out an initial case for even having the petition admitted, given the existence of binding precedent to the contrary, on the same issue. If that was successful, the petitioner would then have to convince the division bench that there was a prima facie mistake in the earlier judgment, that required to be reconsidered by a larger bench (another substantial hurdle). The division bench would – if convinced – refer the matter to a five-judge bench, where the same process would be repeated; and then – if the petitioner was successful in each of these stages – would the matter go before a seven-judge bench to reconsider.

These processes are of fundamental importance. They are important because they preserve one of the crucial pillars of the justice system: the sanctity and finality of judgments (especially those of the Supreme Court). One may agree or disagree with a judgment, but in the interests of legal certainty and stability, the judgment (for better or for worse) is law, and remains law, unless there are powerful reasons to depart from it. Of course, no judgment is set in stone: that is why review jurisdiction exists, and that is why referrals exist. And both processes – as we have just seen – cast an onerous burden upon those who would have the Court revisit judgments that have attained finality.

The first problem with today's order, then, is that it mixes up two things that are fundamentally different in character. Indeed, in no sense is this a "review" at all: the Court does not even attempt to point out "an error on the face of the record" in the original Sabarimala judgment that was ostensibly under review. But if this is actually a judgment about referral, then how did the writ petitioners short-circuit the entire process that exists for these cases, and land up directly before a five-judge bench in proceedings that everyone understood at the time to be proceedings in review?

That said, let us consider the substance of the order itself. In paragraph 3, the Court notes that issues surrounding the entry of women into religious spaces arise in respect of some pending cases before the Court, involving mosques and Parsi fire temples – and that there is also a pending case on the legality of female genital mutilation (FGM). In paragraph 4, the Court then observes: "it is time that this Court should evolve a judicial policy befitting to its plenary powers to do substantial and complete justice and for an authoritative enunciation of the constitutional principles by a larger bench of not less than seven judges … It is essential to adhere to judicial discipline and propriety when more than one petition is pending on the same, similar or overlapping issues in the same court for which all cases must proceed together."

With respect, this is bizarre. What this appears to be is something wholly new, which we can perhaps define as an "anticipatory referral." The Supreme Court is due to hear some cases that have overlapping issues. So before it hears those cases, a larger bench should decide those issues! But unless these different cases are all heard simultaneously, by different five-judge panels of the Court – which then throw up contradictory rulings – this has absolutely nothing to do with "judicial discipline and propriety" (in fact, some of the cases the Court mentions have not even been referred to larger benches!). Let us take a tangible example. Sabarimala was decided last year. Let's say the next case to be heard is the Parsi Fire Temple case. To the extent that legal questions arise in the latter that have already been resolved in the former, the bench hearing the Fire Temple Case will be bound to follow them, unless it decides to refer the matter to a larger bench for resolution. That is how it has always worked. And there has never been a reason to depart from that practice – certainly not by ostensibly citing "judicial discipline and propriety"!

This is made clear by the fact that the Court goes on to note that the issues arising in these pending cases "may be overlapping and covered by the judgment under review." Yes, exactly – and unless the "judgment under review" is set aside in review for having an error apparent on the face of the record, these pending cases will be bound by it! Which brings us back to what the Court was actually asked to rule on in this case, and which it simply did not do – decide the review!

The judgment then frames some issues that it says "could arise" in these pending cases, pertaining to the interplay between various constitutional articles. It also points to an apparent conflict between Shirur Mutt and Dawoodi Bohra, on the issue of "essential religious practices" (the conflict is more apparent than real, but that is a debate for another day), which needs to be resolved by a larger bench.

Notice, however – so far – that what has been referred to a larger bench are certain suggested constitutional questions that may have an impact on the Sabarimala judgment, but are not about that case. But it is now that we come to yet another bizarre part of this judgment. In the penultimate paragraph, the Court notes that "while deciding the questions delineated above, the larger bench may also consider it appropriate to decide all issues, including the question as to whether the Kerala Hindu Places of Public Worship (Authorisation of Entry) Rules, 1965 govern the temple in question at all. Whether the aforesaid consideration will require grant of a fresh opportunity to all interested parties may also have to be considered."

But where on earth has this sprung from? It would be appropriate for this "larger bench" to consider this question – that was settled in Sabarimala – only if it was sufficiently proven to another bench – either in Review or in referral proceedings – that a mistake had been made that warranted reconsideration. But – as already indicated above – the Court does not even attempt to show that a mistake has been made, or may have been made. It simply decrees that the larger bench "may" consider it appropriate to decide "all" issues. How and why? It does not say. This is not how a Court is supposed to reason.

The Court then ends by noting that the review petition and writ petitions shall be kept pending until these "questions" are answered. So, once again, we are back to the same point: it is not the judgment in Sabarimala that has been referred for reconsideration, but certain "questions" that are common to Sabarimala and other pending cases – without any judicial finding that Sabarimala got them wrong! What on earth is happening here?*

The incoherence of this judgment is highlighted in the dissenting opinion authored by Nariman J., on behalf of himself and Chandrachud J. In paragraph 2, Nariman J. sets out the exact point that this blog post has been making:

And indeed, it is difficult to understand how it could be any other way. Nariman J. then actually goes on to write a judgment applying the standards required in a review, and finds that no grounds for review are made out (and that, at the same time, writ petitions directly attacking the judgment are not maintainable). A debate on this could have been had if the majority judgment had actually engaged with any of the points that Nariman J. makes. But of course, as we have seen, they do not. And finally, Nariman J. goes on to point out that arguments around the protests that followed the original Sabarimala judgment cannot possibly constitute a ground for the Court to retrace its steps, in a country governed by the rule of law.

It should, therefore, be clear that what the majority judgment does, in this case, is indefensible under any standard. One may agree or disagree with the original judgment in the Sabrimala case. But what a three-judge majority has done here – that is, exhibit a cavalier disregard for a reasoned judgment of a Constitution Bench, and invent a whole new method for people to collaterally challenge judgments they don't like – cannot but have profound and dangerous consequences for the rule of law. In a Court of thirty-three judges – as I have pointed out before – these issues become particularly important. The more the gravitational force of precedent is weakened – either by declaring coordinate benches per incuriam, or by judicial pyrotechnics as in this case – the more we head towards a factionalised and divided Court, where judicial interpretation becomes less about principle and more about power-play. Sabarimala will be a small casualty in that conflagration.

*Incidentally, a corollary of this is that – for obvious reasons – the majority has not stayed the Sabarimala judgment itself. Until the seven-judge bench is constituted, therefore, the judgment remains good law, and binding and enforceable on all parties, including the State.

Gautam Bhatia Is A Delhi based Lawyer

This article was first published in his blog. It can be read here