Why Criminalization Of Triple Talaq Is Uncalled For? 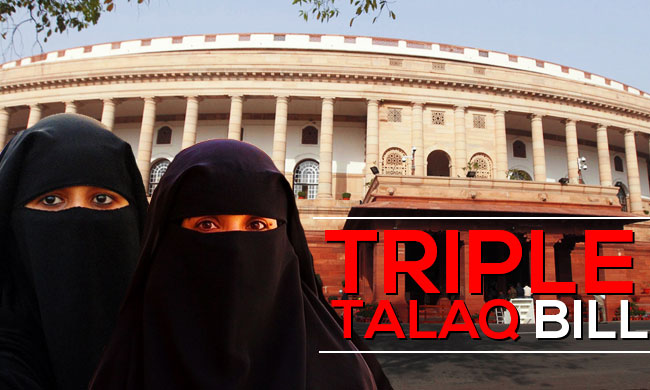 Talaq! Talaq! Talaq! - the three forbidden words under Muslim personal law which engenders the irrevocable breakdown of a marriage. The husband utters these words, sometimes even by text messages, right before he leaves his lawfully wedded wife. Unlike the other forms of Talaq, where a few month's period (iddat period) is observed before the actual divorce, talaq-e-biddat is abrupt...

Talaq! Talaq! Talaq! - the three forbidden words under Muslim personal law which engenders the irrevocable breakdown of a marriage. The husband utters these words, sometimes even by text messages, right before he leaves his lawfully wedded wife. Unlike the other forms of Talaq, where a few month's period (iddat period) is observed before the actual divorce, talaq-e-biddat is abrupt and questionably quick. And this, till the recent Supreme Court judgment of Shayara Bano v. Union of India And Anr. [(2017) 9 SCC 1], was a valid and legal method of divorce. By a 3:2 majority decision, the practice of talaq-e-biddat – instantaneous triple talaq was set aside, holding the practice contrary to the constitutional ethos. Admittedly, talaq-e-biddat, is considered sinful, even by its most vocal supporters. Even before the court rendered it unconstitutional, talaq-e-biddat was often described as "good in law and bad in theology".

The nullification of the  practice of talaq-e-biddat is definitely welcome as it empowers Muslim women against 'surprise' or instantaneous divorce. However, is there any justification in criminalizing it?.

The "Muslim Women(Protection of Rights on Marriage) Bill 2019" passed by the Parliament in the ongoing monsoon session suffers from certain constitutional infirmities. Firstly, it violates the constitutionally protected right of equality and privacy. Secondly, it runs contrary to the established norms of criminal jurisprudence.

Violation of right to equality

Ever since the Apex Court set aside the use of these words in lieu of legal divorce, the whole act of 'talaq-e-biddat' as such ceases to be legally considered as a valid divorce. Then what remains of the specific act which is now deemed to be a crime? The mere act would either be desertion, lack of cohabitation or renouncing the man's position as a husband. Such acts are not uncommon in Indian society amongst men of all religions. So why do only Muslim men face the brunt of it, with criminal sanction and possibility of imprisonment up to three years?

To put things into perspective, if presently, a Muslim man utters 'Talaq' thrice and deserts his wife, he cannot legally claim to have divorced his wife by that act. She will still be his legally wedded wife and the act would merely be an act of desertion with an intention to divorce his wife, though desertion in itself is not an essential ingredient of the offence contemplated under the Bill.

The fact that desertion is not unique to men of a single religion, certainly invokes a constitutional debate on the permissible limits of legislative classification. The Apex Court in the case of State of West Bengal v. Anwar Ali Sarkar [1952 AIR SC 75], laid down an important test for legitimate classification. Firstly, the classification must be founded on an intelligible differentia which distinguishes persons or things that are grouped together from others left out of the group; and secondly, the differentia must have a rational relation to the object sought to be achieved by the statute in question.

Presently, even deserting one's wife is not deemed as a criminal act in India. Thus it is questionable to criminalise an inconsequential act devoid of any legal effect and impose stringent punishments for the same just for a targeted group of men in society, clearly questioning the ambit of equality. Further presumably, if the object of the legislation is to preserve the matrimonial harmony, it is doubtful that if years of incarceration of a partner at the instance of the other, helps to fortify it. A bill actuated by political concerns can hardly fulfill the constitutional requirements of reasonableness.

Even before the Supreme Court pronouncement in Justice K. S. Puttaswamy (Retd.) v. Union of India [(2017) 10 SCC 1 which categorically declared the right to privacy as a fundamental right, the Apex Court in its judgments had secured the right to privacy over personal matters inter-alia marriage, procreation, family and motherhood. It is true that all matrimonial disputes cannot be left to the private sphere and State intervention may be warranted in some cases. However, when such an intervention is proposed to be made, the Apex Court has mandated certain standards to be observed for such an exercise. Primarily, the State action should be to secure legitimate state aim and should be reasonable in nature. Assuming that there was a legitimate state aim in such interference, a law which criminalizes a civil conduct falls short for want of reasonableness.

Further, the Privacy Judgment has emphasized the importance of proportionality in state interference, which entails that the means adopted to prevent a vice should be proportional to the object sought to be achieved by it. In any case, the State, bestowed with the duty to protect the fundamental rights of its citizens including privacy, cannot expand the horizons of legitimate state aim with unreasonable and disproportionate sanctions like imprisonment for a civil wrong.

Celebrated jurist Blackstone opines that "in a crime there is a breach and violation of public rights and duties which affect the whole community considered as a community; and are distinguished by the harsher appellation of crimes and misdemeanours". Thus essentially, private acts including matrimonial discords are kept outside the ambit of criminal law as such issues do not warrant the intervention of the State. However, that does not prevent the state from such interference, provided it is in the public interest and is efficacious in nature. As discussed earlier, the mere act of desertion or renouncement does not constitute a criminal offence in itself but is purely a subject matter of a civil dispute or action alone. If the state seeks to secure an orderly civil conduct from a section of society, does it invariably require the criminalisation of the said conduct?

The government in the Statement of Objects and Reasons appended to the Bill maintained that "setting aside talaq-e-biddat by the Supreme Court has not worked as any deterrent in bringing down the number of divorces by this practice among certain Muslims", and it was 'compelled' to formulate a law. This was reiterated in the introductory speech by the Law Minister in the Parliament during the bill discussion. However, the irreparable damage caused to matrimonial bond after a potential incarceration clearly outweighs the intended effect of deterrence sought to be achieved by this Bill. And in this scenario, a marital dispute is dragged to a court which lacks the necessary apparatus to mend a strained relationship. This can leave an indelible mark on the partners as well as the children born out of such wedlock. Clearly, it may end up as counterproductive.

Undoubtedly, this form of Talaq which granted valid divorce (prior to the Supreme Court judgment), is manifestly arbitrary in the sense that the marital tie can be broken capriciously and whimsically by a Muslim man without any attempt at reconciliation so as to save it. There are many women who suffer the pain of instantaneous divorce in silence, and the Supreme Court has rightly struck down this practice. However, criminalisation of the same and its use as a political garb for victimisation and needless prosecution, is deplorable.

Criminal law may not always be the best tool for social engineering. Therefore, a consensus-oriented mechanism is needed to tackle the condemnable practice of triple talaq rather than blind incarceration. Further any law of this nature, which singles out a certain section of people, can create a trust deficit within the affected community. Even if the proposed law is laudable in motive, it is not the right step to achieve its stated objectives. As the bill has passed the parliamentary channel, some legal challenges certainly awaits it.

(Akhil V Menon is a law graduate and researcher. Govind G Nair is an advocate practicing in Kerala and former Law Clerk-cum-Research Assistant, Supreme Court of India. Views are personal)