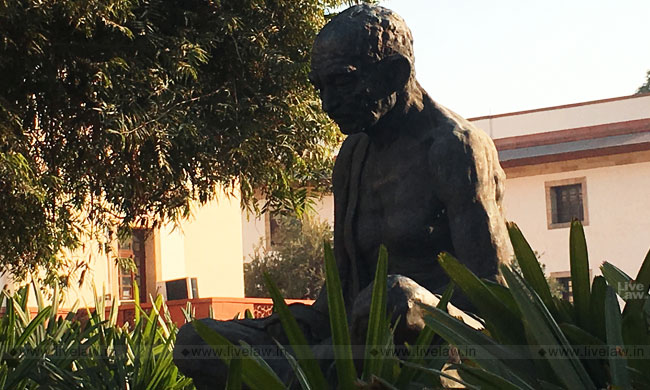 Protesting a change of seat in office; raising a grievance to the President of Employees Association regarding change in seating arrangement; and absence from duty on a half-day for taking child to a school function - are these acts of grave indiscipline which justify termination of an employee's service?

To do so will be against the principle of proportionality.

In the case of the former Junior Court Assistant of the SC, who has come out with sexual harassment allegations against the CJI, these acts resulted in her dismissal from service on December 21, 2018.

This officer, who has been in the service of Supreme Court since May 2014, has an otherwise unblemished record. Her Annual Confidential Reports are endorsed with the grading "Good" inr the first year and "Very Good" in the following years. 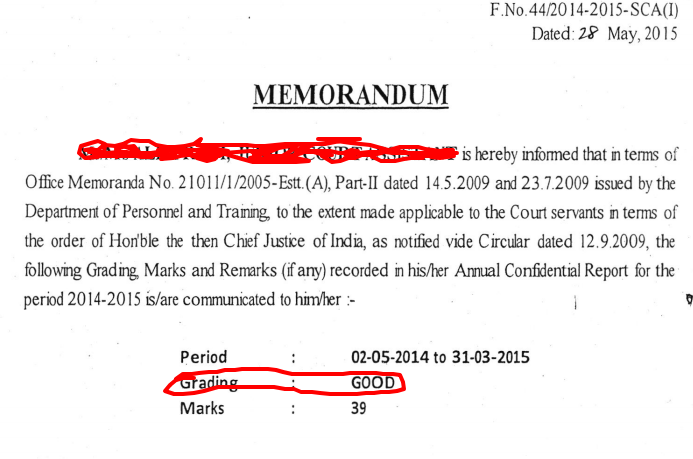 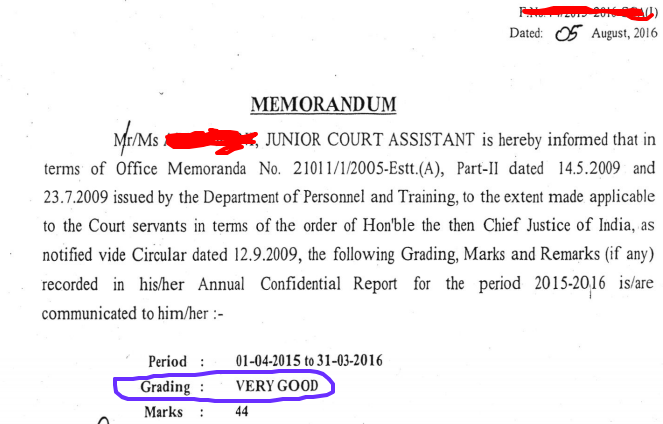 Between August to November, her postings were changed three times. On August 27, 2018, she was appointed at the residence of CJI. Within 2 months, she was transferred and posted at Centre for Planning and Research(CPR) on October 22, 2018. She was again transferred and posted at the Library on November 22, 2018, following her alleged acts of subordination at the CPR.

What are the charges?

The charges do not sound grave; at best, they are trivial transgressions or isolated instances of insubordination, which could be dealt with a censure, or any minor penalty, or any other major penalty except dismissal.

It was on November 19 that she was served with a memo regarding initiation of disciplinary charges. On November 27, she was placed under suspension and was served with 'Article of Charges' and 'Statement of Imputations'.

The charges leading to her dismissal are:

When her seat was shifted from CPR to Admin Section with effect from November 16, she had "shown reluctance, felt dissatisfied" and questioned the seating arrangement. It was alleged that she "acted in a manner prejudicial to discipline".

She had tried to bring influence and exert pressure from "unacceptable quarters" for changing her seat.

She had taken unauthorized leave on November 17(Saturday), defying the direction of the superior to be present for work, and showed "insubordination, lack of devotion to duty and indiscipline". 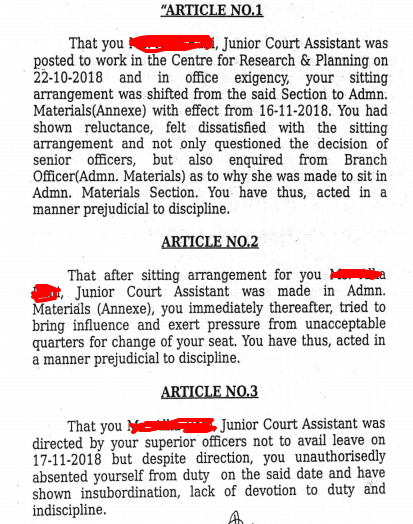 The employee's response to the charges were not confrontational or overly defensive; rather, she adopted an apologetic tone, and highlighted that she was acting under pressure.

As regards the first charge, she said that she had felt anxiety and insecurity over three transfers in a short span.

"What I expressed to the Branch Officer, Admin. Materials Section was not reluctance to perform duties assigned to me but only my anxiety over being allotted three different postings in a short span of time", she explained.

She also apologised if her expression of anxiety "bordered on questioning the authority" and clarified that it was never her intention.

She added that she had "casually" conveyed her anxiety to the President of the Supreme Court Employees Welfare Association. She had requested the President to find out if there was any deficiency in her performance which led to consecutive transfers. This was the basis of charge of exerting pressure from "unacceptable quarter".

She claimed that she had not asked him to speak to Branch Admin on her behalf in respect to seating arrangement.

It is beyond comprehension as to how an employee's communication with the President of an association, which is formed for the welfare of employees, can be regarded as an act of insubordination.

From her response to the third charge of unauthorized absence, we get the picture of a woman who is struggling to balance the pressure from work and domestic obligations.

She said that her eight year old girl child had a function to attend at school on that day, and had conveyed to the Branch Admin her inability to attend office. It may be noted that it was a Saturday, which is half-day for SC staff. It is also pertinent to note that her attending the school program was a permissive act, as her superior officer had allowed her to attend it and to come to work late. This is clear from the testimony of her superior who was examined as PW2 by the Inquiry Officer.

The lady officer stated in her reply that the program got unexpectedly prolonged till 1.15 PM, and so she could not attend office before 1 PM(Saturday is half day). She added that since her husband - then employed with Delhi Police - was out of station, she could not have left the child alone. Instead of a deliberate omission, it appears to be a situational lapse caused by circumstances beyond control.

In this regard, she also added that an SC employee was entitled to 8 casual leaves and that she had only availed four leaves as on that date. She had applied for casual leave on November 16, which was not granted, she mentioned.

Anyhow, she apologised unconditionally and said that "I realise this is a serious lack of judgment on my part and I should not have prolonged".

She also added that it was a "question of survival of her family" .

"I pray with folded hands to consider my case on humanitarian and sympathetic grounds", she pleaded. She also undertook to abide by discipline in future. 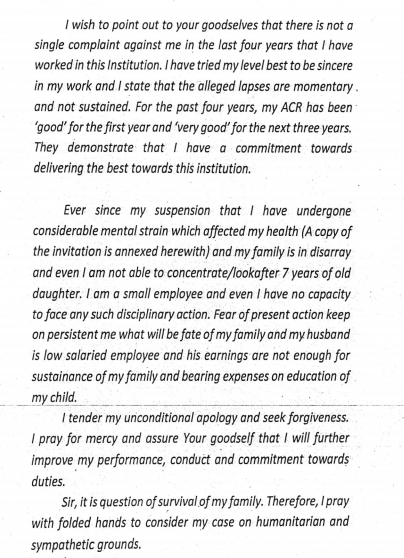 The Inquiry Officer held that the officer had virtually admitted the charges, and reported that the "delinquent official had committed an act of insubordination and that she had acted in a manner unbecoming of a court servant and prejudicial to discipline".

The Disciplinary Authority accepted the findings recorded by Inquiry Officer as "well founded" and imposed om her the major penalty of termination from service under Rule 11(iv) of the Supreme Court Officers and Servants (Conditions of Service and Conduct)Rules 1961 .

From the report of Inquiry Officer, three things follow :

Are these charges grave enough to warrant the penalty of dismissal from service?

It is well settled that the punishment imposed on an employee should be proportionate to the gravity of misconduct. That is the reason why service rules provide for a graded system of punishment, ranging from minor penalties to major penalties. The SC Officers and Servants (Conditions of Service and Conduct)Rules 1961 are also not different.

It provides for a range of penalties in the form of censure, withholding of increments or promotion, reduction in rank, compulsory retirement, recovery from payment, removal from service which will not be a disqualification for future employment, and dismissal from service which will be a disqualification for future employment.

As can be seen, dismissal from service is the severest penalty. For an employee, it is akin to capital punishment. When the service rules provide for different degrees of penalties, the Disciplinary Authority has to apply its mind to choose a penalty which is commensurate with the gravity of misconduct. Otherwise, it will be an arbitrary exercise of power.

In Dev Singh v Punjab Tourism Development Corporation (2003) 8 SCC 9, an employee with 20 years of unblemished service was dismissed for a single act of misplacement of file. The Supreme Court held the punishment to be disproportionate. "If the punishment imposed by the disciplinary authority is totally disproportionate to the misconduct proved against the delinquent officer, then the court would interfere in such a case", observed the Court while altering the punishment to a lesser penalty.

Even in cases of Court Martial against armed officers, the SC has interfered with punishments which appeared disproportionate.

"The question of the choice and quantum of punishment is within the jurisdiction and discretion of the Court Martial. But the sentence has to suit the offence and the offender. It should not be vindictive or unduly harsh. It should not be so disproportionate to the offence as to shock the conscience and amount in itself to conclusive evidence of bias. The doctrine of proportionality, as part of the concept of judicial review, would ensure that even on an aspect which is, otherwise, within the exclusive province of the Court Martial, if the decision of the Court even as to sentence is an outrageous defiance of logic, then the sentence would not be immune from correction", observed the Court in Ranjit Thakur vs Union of India AIR 1987 SC 2386.

In this case, an army officer's dismissal from service for disobedience was set aside by the Court as disproportionate. In Ex Naik Sardar Singh vs Union of India (1991) 3 SCC 213, the SC interfered with the dismissal of an army officer who was found to have taken liquor bottles beyond permit. The SC said that there was "an element of arbitrariness in awarding the severe punishment".

In Collector Singh v LML Ltd Kanpur (2015) 2 SCC 410, the SC held that dismissal from service for an act of throwing jute balls on a colleague was "harsh and disproportionate".

In Ram Kishan v. Union of India 1995 (6) SCC 157, the delinquent employee was dismissed from service for using abusive language against superior officer. On the facts and circumstances of the case, the Supreme Court held that the punishment was harsh and disproportionate to the gravity of the charge imputed to the delinquent and modified the penalty to stoppage of two increments with cumulative effect.

When the punishment is "outrageously disproportionate" to the gravity of misconduct, the Courts will interfere.(Jai Bhagwan v. Commissioner of Police & Ors., 2013 (11) SCC 187). In this case, a police officer was dismissed for shouting at his superior and for not being in proper uniform. The SC reduced the punishment.

The punishment of dismissal is reserved for incorrigible employees in grave cases of dereliction of duty, corruption, cases involving moral turpitude etc. For dismissal to be justifiable, the situation should be such that the continuation of the employee will adversely affect the very functioning of the institution.

Sporadic instances of insubordination by an employee, who otherwise has a good track record, will not justify dismissal under ordinary circumstances.

In the instant case, the Junior Court Officer's expression of protest at the change of seat, or her approaching the President of the Employees Welfare Association with a grievance cannot be seen as grave acts of indiscipline.

Even her unauthorized absence for a single day will not justify dismissal from service, as per the SC precedents.

Apart from that, her unblemished past service, which was graded "very good" and "good" during previous years, and her offering of unconditional apology for the lapse, and her undertaking to abide by discipline in future should have been regarded as mitigating factors.

Unfortunately, these aspects were not taken into consideration by the Disciplinary Authority. There is no discussion why alternate penalties were not suited for the misconduct of the employee.

From the totality of circumstances, punishment against the Junior Court Assistant appears to be "outrageously disproportionate".