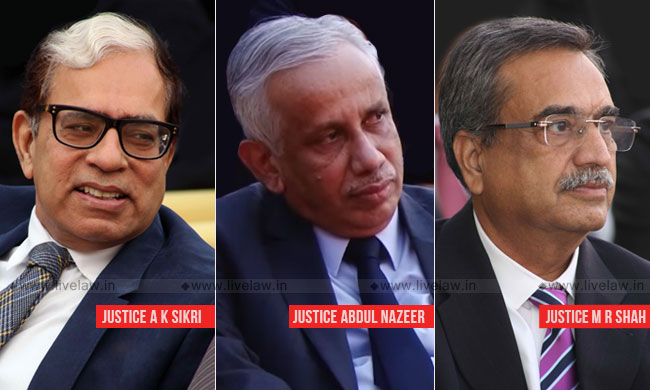 Ten days back, all three members of a Supreme Court bench had recused from the plea of a former woman ADJ seeking reinstatement after having resigned following an inquiry into her allegations of sexual harassment against a sitting High Court judge .The recusal was conspicuous by its timing- the arguments in the matter were almost concluded. Senior Advocate Indira Jaising was in the midst of...

Ten days back, all three members of a Supreme Court bench had recused from the plea of a former woman ADJ seeking reinstatement after having resigned following an inquiry into her allegations of sexual harassment against a sitting High Court judge .The recusal was conspicuous by its timing- the arguments in the matter were almost concluded.

Senior Advocate Indira Jaising was in the midst of her rejoinder submissions when Justices A. K. Sikri, Abdul Nazeer and M. R. Shah, in a surprising turn of events, recused from further hearing the petition. The judges were motivated to so withdraw in view of their proposition asking the MP High Court to deliberate over the possibility of a review of its earlier stance to not to take back the judicial officer in service.

On February 13, a suggestion was put by the Court to the respondents to contemplate whether the request of the petitioner (previously rejected in January, 2018) "can be reconsidered afresh at least on humanitarian grounds" and "whether the petitioner can be taken back in service by giving the benefit of continuity of service and seniority but without salary for intervening period".

This suggestion was advanced "keeping in mind other attendant circumstances" and "without going by legal technicalities" and the suggestion "was without prejudice to the rights and contentions of the parties".

After the bench was informed that the Full Court of the High Court has decided to stand by its earlier position, the judges felt that "having regard to the nature of the order passed on 13.02.2019, this Bench should not deal with the matter on merits now".

With the state of affairs being as it is, one could wonder if a suggestion on its part of a like character would preempt the court from proceeding with the matter. After all, it is not unusual for judges to field a proposal in tune with the relief sought for introspection by the contesting side. A Constitution bench (of which Justice Sikri was part incidentally) had, on its first day of hearing the Goolrokh Gupta case in November, 2017, suggested that the counsel for the Valsad Parsi Anjuman Trust seek its instructions on the right of a Parsi woman married to a non-Parsi to participate in the funerary rites of her parents at the Fire Temple.

"Judges are intuitive reasoners and, I admit, that the thinking is unconscious on several occasions...We have a strong sense of which way a case should be decided, but good judges explain their decision...", Justice D. Y. Chandrachud had articulated eloquently at an event last year

In the course of the Bhima-Koregaon hearing, when Solicitor General Tushar Mehta had implored the bench to not form even a tentative picture before he had shown all the material in justification of the arrest of certain activists over the violence, Justice Chandrachud had quipped that "the mind is only human".

In the NJAC judgment (Recusal matter), the apex court has expressed the view that an "adverse adjudication" or its anticipation alone qualifies as a valid ground for recusal . The Delhi High Court subsequently has, albeit in a criminal case, described "adverse adjudication" as a binding decision on the merits of an issue alone, weighing in that Procedural or interim orders do not give rise to an apprehension of bias.

So could, in the case at hand, a suggestion put forth by the bench at a stage when the submissions on behalf of the respondent-High Court were still underway be regarded as a definite or final opinion on the merits? Particularly when a Judges Inquiry Committee (comprising Justice Banumathi, Justice Manjula Chellur and the present Attorney General K. K. Venugopal) has already recommended that the ADJ "has to be reinstated" if she so wished?

What Justice Sikri's bench had urged the High Court to reconsider was the decision of its Full Court rejecting the representation which was made by the lady judicial officer on the basis of this report of the Committee.

Further, when this resolution of the Full Court was reiterated before the top court on February 21, some more documents in this behalf were sought to be filed by the Registrar General of the High Court- "It is not necessary to take those documents on record as the aforesaid suggestion was without prejudice to the rights and contentions of the parties and this Court is supposed to proceed with the matter on the basis of the documents already available on record", the bench headed by Justice Sikri had recorded.

Years ago, in another matter it was argued that the High Court judges who had adjudicated on its merits in fact ought to have recused, considering that they had previously, as Sessions Judges, framed charges and recorded evidence in the same case. There, the apex court had gone on to observe, "Judicially trained minds would examine the matters in their appropriate light; with detachment notwithstanding that view one way or other had been expressed in initial stages of the proceedings or in disposing of the interlocutory applications".

In 2007, the Supreme Court tackled the instance of a judge having initially issued notice and granted interim protection on a writ petition, and then later, also having heard the Letters Patent Appeal against the orders on the petition- "It cannot be laid as a rule of universal application that whenever any learned Single Judge had dealt with a case even for routine purposes like issue of process or rectification of defect or even to pass an order of adjournment, that would preclude him from hearing the appeal", the court had reflected

As to the tests of the likelihood of bias, the Supreme Court has on an earlier occasion held that "the proper approach for the judge is not to look at his own mind and ask himself, however honestly, 'Am I biased?', but to look at the mind of the party before him".

In their recusal order in the instant case, the three-judge bench clarifies that "This decision is taken notwithstanding the statement of the learned senior counsel appearing on both sides that they have full faith and trust in this Bench".

In their turn, Justices Khehar and Radhakrishnan had in 2014 refused to believe themselves disqualified from hearing the merits of the claim against their detention of Sahara's Subrata Roy in judicial custody for contempt, even in the face of imputations of bias and "a strong commitment to the other side". Noting that precious time running into several months had been consumed in understanding the nuances of the controversy and that with the constitution of a new bench, a prolonged hearing would again be called for, the bench had proceeded to hear the petition, remarking indulgently that "the Recognition of a (alleged) mistake (in its earlier order), and its rectification, would certainly not put us to shame".

Now with plea having been placed before the third senior-most judge of the Supreme Court, the matter shall be argued afresh before Justice S. A Bobde in April.