Written, Rewritten And Unwritten – Our Constitution 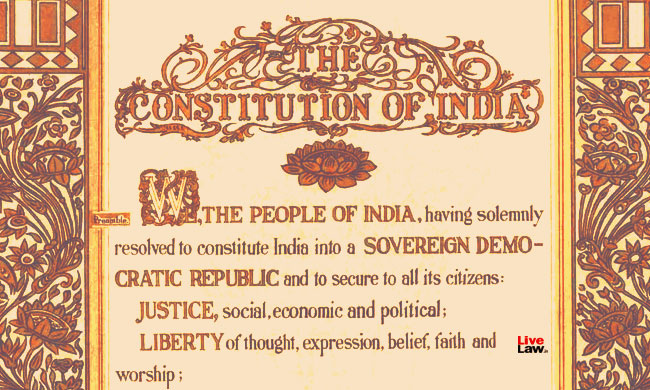 70 years back our Constitution was adopted on 26th November 1949 after 3 years of extensive debates by the Constituent Assembly and notably 4 years back, this day was renamed as the 'Constitution Day' or 'Samvidhan Diwas'. The 1st seed of the Constitution as we have today was sown on 31st December 1929 at the Lahore Session by Jawaharlal Nehru. 4 weeks later, 26th January 1930 was declared as...

70 years back our Constitution was adopted on 26th November 1949 after 3 years of extensive debates by the Constituent Assembly and notably 4 years back, this day was renamed as the 'Constitution Day' or 'Samvidhan Diwas'. The 1st seed of the Constitution as we have today was sown on 31st December 1929 at the Lahore Session by Jawaharlal Nehru. 4 weeks later, 26th January 1930 was declared as the 'Poorna Swaraj' Day. Gradually after much efforts, under the Indian Independence Act, 1947, India obtained freedom and a Constituent Assembly was formed. Interestingly, this Constituent Assembly which framed the Constitution was elected by provincial legislatures under a British Act of Parliament and not through adult suffrage. It took it 2 years 11 months and 17 days to complete the drafting. It ran in 11 Sessions divided in 165 days and out of this 114 days were spent on consideration of the draft Constitution. The initial total membership was 389 members which got reduced after partition to 299 members. The members of the Assembly were distributed amongst 13 Committees which tabled a monumental 7635 amendments on the table out of which 2473 were discussed. The final draft was signed by 284 members. As per Article 394 of the Constitution, 15 Articles came into immediate effect and rest on January 26, 1950. Finally we gave ourselves perhaps the longest Constitution in the world divided into 22 parts, 395 Articles (now 442 articles in toto) and 8 Schedules (now 12).

Framing the Constitution was an enormous task and an even bigger duty. The Constitution used and borrowed provisions of the Government of India Act, 1935. However, the borrowing extended to cross border jurisdictions as well. From UK, we borrowed Parliamentary form of Government, Single Citizenship, Rule of Law, Speaker and her duties, Legislative Process, CAG. From the US, we borrowed Preamble, Fundamental Rights, Judicial Review, Independence of Judiciary, Powers of the Supreme Court, Equal protection of laws and functions of president and Vice President. From Ireland we brought Directive Principles of State Policies, Election of President and Nomination by President to Anglo Indians. From Canada we recruited provisions related to Residuary Power, Federal System and Union with a strong Centre. From USSR, we had the Planning Commission (now replaced by the Niti Aayog), 5 year Plans, Fundamental Duties and the expression 'Justice' in Preamble. From Australia we took Concurrent List and the provisions on Trade and Commerce. From Japan (as per the advice given to Constitutional advisor Shri B.N.Rau by Justice Felix Frankfurter) we borrowed the expression 'except according to procedure established by law' as against the US 'due process' clause in Article 21. From South Africa, we took the 2/3 amendment procedure and election of Rajya Sabha members. From France, we received Republic and 'liberty, equality and fraternity'. Interestingly we also borrowed something Germany (Weimer Constitution) – Emergency provisions and Suppression of Fundamental Rights.

Attacks on constitutional spirit began right from 1951 when the 1st Constitutional Amendment was passed which in a nutshell intended to evade judicial scrutiny by pushing legislations inside the new 9th Schedule. Notably, this was passed by the same Constituent Assembly which drafted the Constitution as the 1st Lok Sabha elections were conducted in 1952. Its primary agenda was to nullify a judgment of the Patna High Court wherein one of the agrarian reform legislations was struck down. This, though unintended, triggered an era of conflict over guardianship/custodianship of the Constitution between the Parliament and the Supreme Court.

After checking land reforms, in landmark judgments, attempts to control press by the Parliament were quashed in Crossroads and R.C.Cooper cases. As the Government was inserting legislations in the 9th Schedule whimsically, in 1967, in Golaknath Case the Supreme Court held that the Parliament cannot take away Fundamental Rights and prospectively overruled such legislations. To nullify this, in 1971, 24th & 25th Amendments were introduced. The 24th Amendment stipulated that the Parliament could amend any provisions of the Constitution under Article 368. These amendments were finally partially struck down in Keshvananda Bharati (1973) and it was held that no amendment can be passed which violates 'basic structure' of the Constitution. This led to attempts being made to build a 'committed judiciary' and judges were superseded to elevate government's favoured as CJIs. A 13 judge bench was also immediately constituted to nullify the judgment in Keshavananda Bharati which thankfully could not completely re-hear it. However, this did not stop the Government from nationalization of various sectors and abolition of privy purses of erstwhile rulers. In 1975, during emergency, the 39th Amendment stating that any law made by Parliament before its commencement shall not apply to election of President, Vice President, Prime Minister and Speaker was passed. The Supreme Court quashed it in Indira Gandhi v Raj Narain. The Government again sought to develop a 'committed judiciary' or in another sense a 'controlled judiciary' and superseded the seniority convention. In another direct attack, the 42nd Amendment was introduced during Emergency to substantially reduce the power of judicial review of constitutional courts. A number of its provisions were thereafter removed in 43rd & 44th amendments by the successor government & remaining ones were quashed in Minerva Mills [1980].

This forced judiciary to deinstitutionalize itself from being a 'legal institution' and get transformed into a 'governing institution'. This lead to advent of Public Interest Litigations and rise of judicial activism. A plethora of cases were decided expanding the ambit of Article 21 to include various fundamental rights and environmental jurisprudence was crafted inside the Constitution itself through judgments in T.N.Godavarman & M.C.Mehta cases. The attempts at luring vote banks in the garb of reservations to public employment and educational institutions however continued and Articles 15 & 16 were interpreted & amended to nullify judgments in the Mandal case [1992], Virpal Singh Chauhan [1995] and Vinod Kumar [1996] via the 77th , 85th and 82nd Amendments. In the most recent blow to the Constitution an attempt to encroach upon judicial appointments was made via the 99th Amendment to nullify judgments in 2nd & 3rd Judges cases [1993 &1998] by drafting NJAC. This amendment was quashed in the 4th Judges case [SCOARA v UOI].

Our Constitution is like a guardian whose two sons (judiciary and legislature) are at a constant slugfest to claim right over it. The founders thankfully inserted Articles 13 & 144 which mandate judicial review & that all three organs have to cooperate with the Supreme Court. It is precisely because of this that the written constitution though has been erased, rewritten and unwritten, still shines a full moon. Its greatest victory perhaps is that the tolerance interval between 'I legislate - You quash – I legislate again' dictum has increased. This day has been notified as the 'Constitution Day' by the current ruling establishment. The winter session of Parliament is also running. Important ordinances and pending bills will be discussed. The Constitution being a dynamic document, has been regularly re-written to suit the needs of the generations. As pen pushers we hope the future writings of the same will uplift the constitutional spirit. Till then fingers crossed!

(Author is a practicing Lawyer at Supreme Court)