Comments In Loya Judgement Are About The Conduct Of "Petitioners & Intervenors": SC Clarifies In Jaising's Plea [Read Judgment] 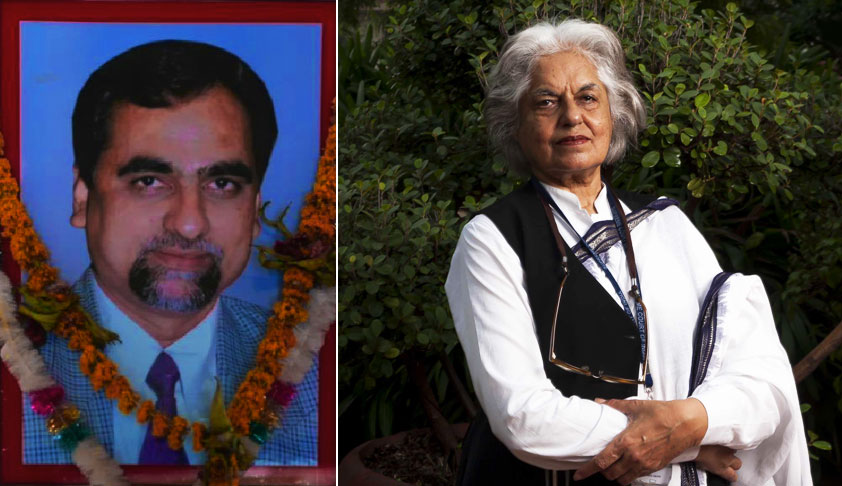 The Supreme Court on Wednesday disposed of an application filed by former Additional Solicitor General for India and Senior Counsel Ms. Indira Jaising for removal of certain adverse remarks made by the Court in its judgment denying independent probe into CBI Special Judge Brijgopal Harkishan Loya’s death holding that the observations of the Court advert to the conduct of the petitioners...

The Supreme Court on Wednesday disposed of an application filed by former Additional Solicitor General for India and Senior Counsel Ms. Indira Jaising for removal of certain adverse remarks made by the Court in its judgment denying independent probe into CBI Special Judge Brijgopal Harkishan Loya’s death holding that the observations of the Court advert to the conduct of the petitioners and intervenors.

The Court asserted that Ms. Jaising’s petition proceeds on the basis that the observations which were made in regard to the conduct of the “petitioners and intervenors” attach to her personally. Pointing this out, it then observed that if Ms. Jaising “identifies with the intervenor, that is a matter of perception for counsel”.

“The observations of the Court advert to the conduct of the petitioners and intervenors. The findings of this Court are based on what was argued during the course of the hearing. The Miscellaneous Application is accordingly disposed of,” it therefore ruled.

The bench comprising Chief Justice of India Dipak Misra, Justice AM Khanwilkar and Justice DY Chandrachud essentially relied on Ms. Jaising’s submission during the hearing of Judge Loya case that contempt notices should be issued to the Administrative Committee of the Bombay High Court, which had transferred Special CBI Judge J.T. Utpat in the Sohrabuddin case. One of the paragraphs demanded to be removed by her  merely pertained to this submission, the making of which is not in dispute.

During the hearing, Senior Counsel, Mukul Rohatgi, appearing on behalf of the State of Maharashtra opposed the application, submitting that the application had not been filed  by her to pursue her own interest as counsel practicing before the court, but to revive the controversy which has been settled by the court.

She had pointed out that it was the Supreme Court which had directed the Administrative Committee to ensure that the trial is conducted from beginning to end by the same officer. Despite this, she submitted that Judge Utpat was transferred from Mumbai to Pune during the trial, without permission from the Apex Court. This, she said, was a “clear prima facie case of disobedience of the order of this Hon’ble Court”.

On being confronted with this allegation, Dr. Singhvi submitted in the course of his rejoinder that the prayer is being given up. The court, however, recoded Mr. Rohatgi’s submission that if, as submitted by Dr Singhvi, the inclusion of prayer clause (c) was inadvertent, the statement that the prayer is being given up ought to have been made before submissions commenced, prior to an objection being raised on his behalf.

The Apex Court had, in Judge Loya case, rejected the Petitions and Intervention Applications (IAs) in April this year. One of the IAs was filed by Admiral Laxminarayan Ramdas who was represented by Ms. Jaising. The Court had opined that the Petitions lacked merit, and that the conduct of the petitioners and the intervenors is “lacking in bona fides and reveals a misuse of the judicial process”.

It had further found Ms. Jaising’s conduct as prima facie amounting to contempt of court, observing, “The present case is indeed a case in point. Repeatedly, counsel for the petitioners and intervenors have attempted to inform the court that they have no personal agenda and that they have instituted these proceedings to protect judicial independence. An aura of good faith has been sought to be created by submitting that the true purpose of seeking an inquiry into the circumstances relating to the death of Judge Loya is to protect the district judiciary…”

“…Ms .Jaising has joined the fray by requesting that this court to issue contempt notices to the Administrative Committee of the Bombay High Court…”

“…The conduct of the petitioners and the intervenors is, as we have indicated, lacking in bona fides and reveals a misuse of judicial process…”

Her application, filed through Advocate Sunil Fernandes, submitted that her IA as well as Written Submissions did not contain any averment that could be considered as constituting prima facie contempt.

She had further objected to the observations contending that the Court made “sweeping generalised observations about all the counsels rather than discussing whether the submissions of each counsel tantamount to prima facie contempt”.

Furthermore, Ms. Jaising had pointed out that she had not been afforded an opportunity to defend herself against charges of criminal contempt by neither issuing a written notice nor informing her of the actions amounting to criminal contempt.

With these submissions, she had demanded expungement of the remarks, as well as a clarification to the effect that she did not engage in conduct which amounted to contempt of Court.