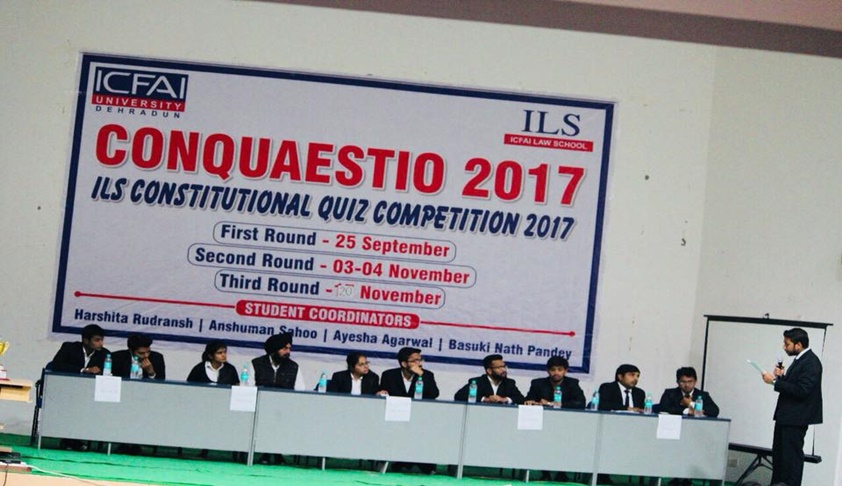 With the objective of spreading constitutional awareness, began the preparation for the organisation of the ILS Constitutional Quiz Competition for the year 2017. The name ‘ConQuaestio’ was coined by student coordinator Anshuman Sahoo, picking the ‘Con’ from the word ‘Constitution’ and adding the Latin word ‘Quaestio’ (to ask) to it.

On 6th September, the event was publicly declared before the students of the Law School, and registrations were made open for interested students.

31 top-scoring teams from the first round were shortlisted, and were selected to appear for the second round. The second round which took place on the 3rd and 4th of November 2017, was a presentation round which required the teams to present constitutional law cases extemporarily, before a panel of judges. Gaurav Mittal, Aseem Chandra Paliwal, Sunil Kumar, Avishek Raj, Alok Kumar, and Hemant Singh, Assistant Professors, ICFAI Law School, Dehradun, judged the second round of the competition.

The event started with the showing of a short documentary on the making of the Constitution of India, followed by the ‘oath-taking ceremony’, wherein Prof. (Dr.) HM Mittal, Dean, ILS made the audience take pledge of the preamble to the Constitution of India. The first stage of the ‘Clash of ConGiants’ followed shortly, and five teams were short-listed therefrom to compete in the second and final stage of the competition.

The second stage of the competition involved out-of-box thinking, and innovative application of constitutional law knowledge of the participants. Rounds like ‘ConCharade’, ‘Who am I’, ‘Rapid fire’ etc. made the teams scratch their heads in reality. Evidently, the final battle invoked a lot of excitement amongst the audience too.

The final round had Prof. (Dr.) HM Mittal, Dean, ILS as the chief guest, Alok Kumar, Avishek Raj, and Saurabh Siddhartha, as judges, and Gaurav Mittal as the scorer. The event marked its successful completion with the award distribution ceremony.