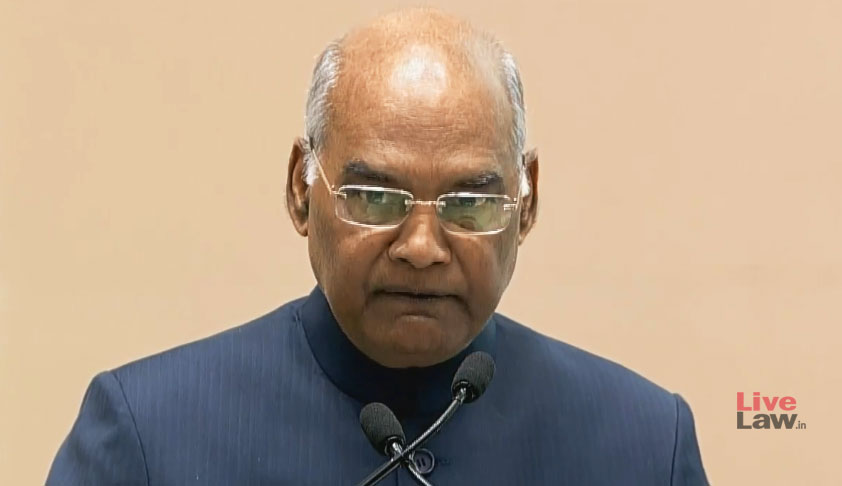 President Ram Nath Kovind, described the Constitution as “the modern scripture of independent India”; “our Suprema Lex”; “much more than a collection of articles and clauses, it is a living inspiration for an ideal society; an aspiration not just to India but all emerging nations”President was speaking at the inaugural function of ' The Constitution Day ' celebrations."Dr Ambedkar...

President Ram Nath Kovind, described the Constitution as “the modern scripture of independent India”; “our Suprema Lex”; “much more than a collection of articles and clauses, it is a living inspiration for an ideal society; an aspiration not just to India but all emerging nations”

President was speaking at the inaugural function of ' The Constitution Day ' celebrations.

"Dr Ambedkar and his colleagues in the Constituent Assembly were remarkably large-hearted and generous in their approach. They allowed for flexibility in amending the Constitution and were accommodative of various streams of thought. They trusted the wisdom of future generations to expand the frontiers of freedom and liberty, justice and fraternity, fairness and equality. They trusted future generations to not just amend the Constitution, but to constructively re-imagine and reinterpret it". He said.

He advanced that though the Legislature, the Executive and the Judiciary have legitimate roles and critical responsibilities to fulfill the constitutional hopes, it is the People of India who are the ultimate custodian of the Constitution, in whom the sovereignty vests and in whose name the Constitution has been adopted.

“‘Perhaps the most moving word in the Constitution is “justice”. “Justice” is a single word. “Justice” is a complex and liberating expression. And “justice” is both the means and the goal of our constitutional and nation-building process. Justice is served when justice is accessible, affordable and quickly available to all citizens, irrespective of background.But justice must also be seen in a wider context – in terms of society’s evolution and its changing beliefs, lifestyles and technologies", he continued.

“Justice in the political arena is not just free and fair elections and the exercise of the Universal Adult Franchise; it also calls for transparency in finances and checking disruptions in parliamentary proceedings....we need solutions to the frequent adjournment sought to delay the proceedings to the disadvantage of the less well-off litigants. Last year, on this very day, I had suggested that certified translated copies of judgments in regional languages be also issued by courts and I am glad that the Supreme Court has initiated the same in Hindi. By 2019, I look forward to all High Courts doing so in the local languages....Social Justice today has expanded to the modern civil parameters of clean air, less polluted cities, towns, rivers and water bodies, sanitary and habitable living conditions. If a child suffers from asthma due to air pollution I would consider that a gap in providing social justice”

Preamble is the source code of the Constitution

President said the Preamble is an irreplaceable aid to appreciating and interpreting the Constitution.

"If I could use a term with which the younger generation may be familiar, the Preamble is the source code of the Constitution.In the Preamble, justice is not seen as unidimensional. It is viewed as having implications across political, economic and social spheres. Political justice implies the equal participation of all adults in the political process and just laws".

The President was of the opinion that technology has a “tantalizing influence” on justice, that technology is an enhancer of justice as well as a challenge, that it is a subset of economic justice.

“The Aadhaar-linked Direct Benefit Transfer is an attempt to counter corruption, leakages and exclusion in the welfare programmes of the State....there also arise the issues of access and privacy- data privacy against the use of data for the greater common good. Here lie the competing notions of justice”

Iterating that “Justice has as many stakeholders as India has citizens”, President Kovind urged that it become the national mission, in collaboration with the media and the social media, to strive to improve the awareness about the Constitution and the rights and responsibilities it embodies.

“It is a paradox that our citizens, in whose name the Constitution was adopted, are sometimes not sufficiently informed about what the Constitution means for us. November 26, 2019, would mark the 70th anniversary of the adoption of the Constitution. Let us make the coming year worth this anniversary by giving the constitutional ethic a greater salience in all our thinking and all our action ", He concluded.