Constitutional Morality Should Not Be Differed From Judge To Judge: Law Minister RS Prasad 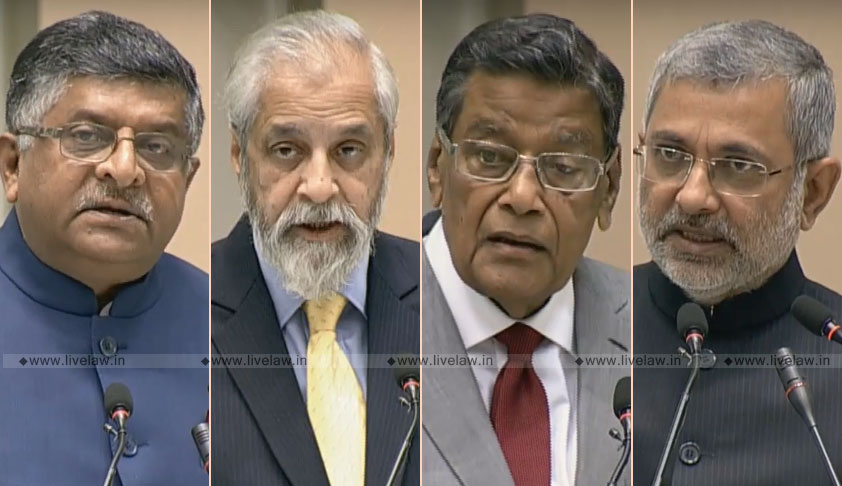 Law Minister Ravi Shankar Prasad pressed for judicially-manageable standards of constitutional morality- “when We talk of constitutional morality as a touchstone for governmental action, its nuances need to be outlined with greater clarity; it should not differ from judge to judge but there must be a consensus....in context of Articles 14 and 21, we interpret the constitutional silences and this is where the basic structure of the Constitution plays the guiding role....”

Minister was speaking at the inaugural function of Constitution  Day Celebration 2018.

“Human rights are read as a part of Article 21. But terrorists today, equipped with the most destructive weapons, also speak of human rights and the right to fair trial, which we must give them. But how to balance the rights of the victims of these senseless killings?”, he asked.

“When the Constitution was being drafted, there was a hint of doubt that India may not be fit for democracy. And there may have been a point, what with the partition and people being massacred. But the Innate trust in the people of India of the Constitution stands vindicated- the people know who they are, they have this confidence that they can unseat any political leader or party, either in Delhi or in the states. There is this sense of accountability- people know that they have to perform or perish, there is a Trust in the democratic process regardless of religion, caste or economic status....There were forces in South India which once deliberated on alienating away from India, but when they were trusted with political power by franchise, these talks have never resurfaced. This is the humbling power of the Constitution!”

Attorney General K. K. Venugopal commenced his address by quoting Justice Vivian Bose, in as much as the former Supreme Court judge had averred that “the Constitution is not for the exclusive benefit of Governments and States; it is not only for lawyers and politicians and officials and those highly placed. It also exists for the common man, for the poor and the humble, for those who have businesses at stake, for the ‘butcher, the baker and the candlestick maker’. It lays down for this land ‘a rule of law’ as understood in the free democracies of the world. It constitutes India into a Sovereign Democratic Republic and guarantees in every page rights and freedom to the individual side by side and consistent with the overriding power of the State to act for the common good of all”

“This, in a nutshell, encapsulates what the Constitution means”, stated the AG.

Quoting Dr. Rajendra Prasad as in the Constituent Assembly on November 26, 1949, in so far as the first President of India had said that “A Constitution like a machine is a lifeless thing. It acquires life because of the men who control it and operate it, and India needs today nothing more than a set of honest men who will have the interest of the country before them”, the top law officer remarked, “these are words eternal in character and must be kept in mind for all times to come, in India and outside”.

In his welcome address, Justice Madan B. Lokur had regarded the Constitution as a “vibrant, living document” framed by “Eminent personalities with an extraordinary futuristic wisdom”.

“The Constitution has stood the test of time and will continue to do so, It will continue to Protect and defend our sovereign democratic republic.... but How often do we applaud its basic structure- the fundamental freedoms, the right to life and liberty and the equality under the law. We can build the future based on these ideals through the path of the Directive Principles of State Policy....”

“The Parliament and the state legislatures have become a part of our daily life through their members who are our representatives elected through an independent body and who lay down the law. The Controller and Auditor General and the Union Public Service Commission aid in achieving a strong executive that implements and enforces the law while retaining a meaningful connection with the common man, particularly in the rural and the remoter areas. The Judiciary is the guardian of Constitution with a mandate to ensure that the Fundamental Rights are not violated and the Executive and the Legislature do not transgress the constitutional limits....these institutions along with the watchdog press have ensured that the democracy thrives”

“There have been numerous Challenges to our body politic. On this very day in 2008, in the threat posed by a terrorist unit, over 250 people had lost their lives. we must continue to be resilient to face these challenges unitedly and resolutely. The integrity of our country must be the foremost concern!”, signed off the second seniormost judge of the apex court.

Supreme Court Bar Association President and Senior Advocate Vikas Singh emphasised on the need for “innovative legislation”, to think ahead and to adapt to changing times.

“Our Prime Minister has placed some 1200 laws on the executioner’s block and several more are being examined in terms of their suitability in present times....I had once suggested to the Parliament to have a law to outsmart the terrorists, that would restrain the media from publishing the names of the organisation and the perpetrators of a terrorist attack, taking away their sole incentive of publicity....I was the Special Public Prosecutor during the Abu Salem trial and there used to be 30-40 cameras following to cover him. This needs to be checked because if the accused is innocent, it may harm him, else it feeds the organisation’s motive of publicity....Article 19(2) ensures that such a law passes the muster....”

Proposing the vote of thanks, Supreme Court Justice Kurian Joseph Advanced an appeal to the people of the country, being not merely stake-holders but also “duty-holders” to resolve to become law abiding citizens. "Adhering to the Constitutional principles is the major issue the nation is faced with today," he declared.