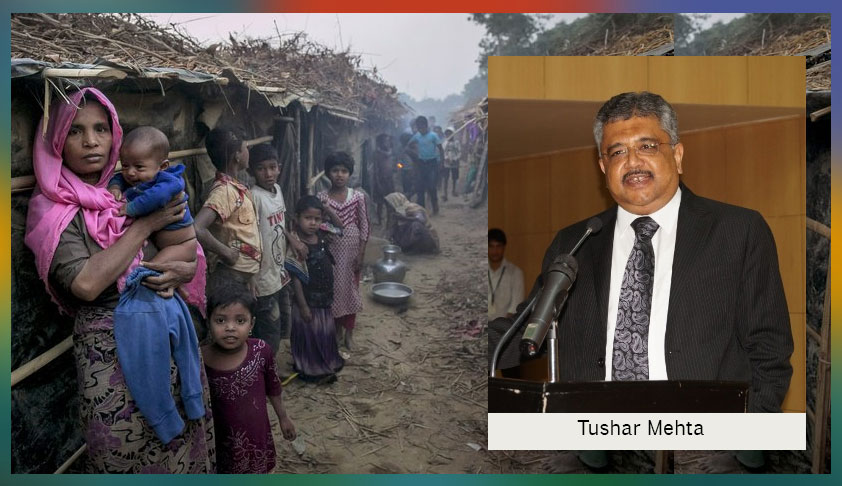 The Centre in its affidavit before the Supreme Court submitted that , as the subject matter of the petitions in the petitions against deportation of Rohingyas is not justiciable, and the fundamental rights of Indian citizens would be adversely effected, the Court may decline its interference in the matter leaving to the Central Government to exercise its essential executive function by way of...

The Centre in its affidavit before the Supreme Court submitted that , as the subject matter of the petitions in the petitions against deportation of Rohingyas is not justiciable, and the fundamental rights of Indian citizens would be adversely effected, the Court may decline its interference in the matter leaving to the Central Government to exercise its essential executive function by way of a policy decision in larger interest of the country.

ASG Tushar has earlier submitted before the three Judge bench hearing the case that the Centre will file the affidavit today.

The Affidavit filed by Mukesh Mittal,Joint Secretary [Foreigners] in the Ministry of Home Affairs submitted that this is not a case where the constitutional court of the country which is essentially the custodian of Fundamental Rights of Indian citizens may consider intervening.

Centre submitted that that the State, in exercise of its sovereign executive functions, will have to take administrative policy decisions keeping the aforesaid Directive Principles in mind so as to ensure that first and the foremost, obligations of the State towards its citizens enshrined under Part III of the Constitution are discharged within the available national resources and while ensuring their safety and security.

It is also submitted that whenever the country faces a problem of influx of illegal immigrants, the Central Government, in exercise of its executive functions, takes policy decision depending upon several facts, parameters, diplomatic and other considerations, potential dangers to the nation etc.

“In respectful submission of the Central Government, such decisions regarding deportation of illegal migrants are essentially executive decisions taken by the Government as a part of governance of a sovereign nation and as a process of policy making and are taken based on several executive and administrative considerations which would not be justiciable.  The fact situation, the potential threat to the internal and national security of the country, diversion of the national resources to the detriment of Indian citizens etc. differ from case to case and the Central Government takes its executive / administrative decision in discharge of its executive sovereign function based upon empirical data and objective facts by way of policy.  This Hon'ble Court may not, therefore, accede to any prayer which may amount to re-writing or substituting an essential executive policy of the Central Government”.

India Not A Party To Conventions

“India being not a signatory to either the aforesaid Convention of 1951 or Protocol of 1967, is not bound by any of its provisions.  It is respectfully submitted that while India is a party to the International Covenant on Civil and Political Rights, the scope of the said Covenant does not extend to the principles of non-refoulement.So far as the International Convention on Protection of All Persons against Enforced Disappearances and Convention Against Torture and Other Cruel, Inhuman or Degrading Treatment or Punishment is concerned, it is respectfully submitted that apart from the fact that India is yet to ratify these Conventions [and, therefore, do not bind India], no situation has emerged, even hypothetically, to place reliance upon the same Conventions”.

Centre submitted that the total number of such illegal immigrants into our country would be more than 40,000 approximately as on date.

It is also submitted that continuance of Rohingyas’ illegal immigration into India and their continued stay in India, apart from being absolutely illegal, is found to be having serious national security ramifications and has serious security threats.

“It is observed by the Central Government that some Rohingyas are indulging in illegal / anti national activities i.e. mobilization of funds through hundi/hawala channels, procuring fake / fabricated Indian identity documents for other Rohingyas and also indulging in human trafficking. They are also using their illegal network for illegal entry of others in the India. Many of them have managed to acquire fake / fraudulently obtained Indian identity documents i.e. PAN Card and voter cards”.

Centre submitted that many of the Rohingyas figure in the suspected sinister designs of ISI/ISIS and other extremists groups who want to achieve their ulterior motives in India including that of flaring up communal and sectarian violence in sensitive areas of the country.

Meanwhile the legendary senior advocate Fali Nariman will be appearing for the two main petitioner Rohingyas whose plight had been brought to court by noted lawyer Prashant Bhushan. They are challenging the deportation on several grounds.

The bench headed by Chief Justice Dipak Misra has adjourned the hearing to October 3 awaiting the Centres response.

The plea was filed by two refugees Mohammad Salimullah and Mohammad Shaqir. The petition has the ministry of home affairs, National Human Rights Commissions and United Nations High Commission For Refugees (UNHCR) as respondents.

The Petition relies on a Reuters report dated 14 August, 2017, which had revealed that the Central Government had directed the State authorities to identify and deport illegal immigrants including Rohingya, who face persecution in Buddhist-majority Myanmar. Currently, around 40,000 refugees are said to be residing in India.

Though the petitioners have pleaded to issue notice to NHRC, the bench has refused the prayer.