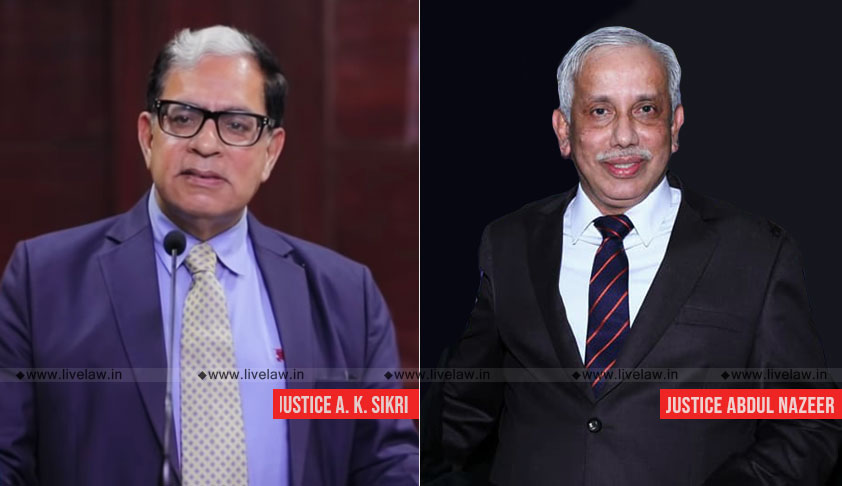 Agreeing to hear the matter post the winter vacation, the Supreme Court bench of Justices A. K. Sikri and Abdul Nazeer on Monday required a compilation of corruption allegations against Justice Ram Krishna Gautam, who was appointed judge of the Allahabad High Court recently, to be filed.

The SLP preferred by “Progressive Lawyer Association”, a Meerut-based NGO, arises out of the decision of the High Court dismissing its plea challenging the enquiry report which gave Justice Gautam a clean chit.

Justice Gautam was a District & Sessions Judge. It was alleged that he was associated with crime syndicates and he handed down acquittal orders to several prominent accused persons after receiving illegal gratification. He was alleged to interfere with the judicial functions of subordinate judges so as to influence final judgment. District Judge, U K Sirhoi, had made a representation to the Allahabad High Court alleging misconduct and corruption on the part of Gautam. The petitioner also sent a representation supported with an affidavit to the High Court of Judicature at Allahabad, especially pointing out instances of misconduct by him.

As an instance of misconduct, it was stated that the judge had taken part in the birthday party of the son of an accused in a prominent kidnapping case, which was pending before him. The photos of the judge in the party had gone viral in social media.

On Monday, Senior Counsel Vikas Singh, appearing on behalf of the petitioner-association, pointed out the inconsistencies in the statements of the accused and the SSP as to the events of the said party-

“There is a claim that it was a family get-together organised on the eve of Diwali, where there was also a birthday celebration. It is also being alleged that it was not a private party and even the District Magistrate was invited...The accused says that he had told the SSP he would not celebrate his son’s birthday at his residence, but on the SSP’s insistence, he agreed to do so. The SSP is saying he does not know who the child was...the judge says there was also the birthday celebration of a child at the get-together who he did not know and who he went to wish because everybody else was wishing him...”

“So at the SSP’s place, a party is organised. A particular guest (the said accused) comes and he goes to wish his son. That does not mean anything”, remarked Justice Sikri.

“Then why is the SSP saying ‘some child came’? This judge who was in the ICU only came to deliver the judgment and then went back to the ICU? And then He was given a clean chit in a wishy-washy enquiry?”, pressed Mr. Singh.

When Justice Sikri inquired if the guest was the accused and if he was granted bail, the Senior Advocate replied in the affirmative.

“The High Court, in the case by Progressive Lawyers’ Association, said that the complaint made was not on affidavit. It said that the enquiry report was not produced. When Sirohi took it to the High Court, the Court said it was belated...Why are such senior people like the SSP and the judge giving different explanations? This issue raises eyebrows and Somebody should examine!”, he urged.