Creamy Layer Test Can Be Applied To Promotions Of SC/STs, SC Holds While Declining To Refer Nagraj Verdict To Larger Bench [Read Judgment] 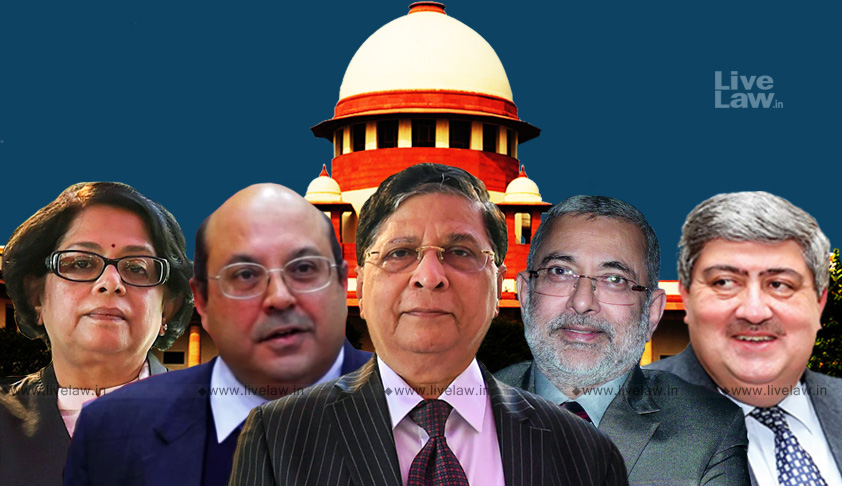 Courts, when applying the principle of reservation, can exclude the creamy layer from groups in the Presidential Lists applying the principles of equality under Articles 14 and 16 of the Constitution of India,  held the Supreme Court. A five-judge Constitution Bench of the Supreme Court on Wednesday ruled that the judgment in the case of M. Nagraj & Others v. Union of India...

A five-judge Constitution Bench of the Supreme Court on Wednesday ruled that the judgment in the case of M. Nagraj & Others v. Union of India & Others, relating to reservations for Scheduled Castes and Scheduled Tribes in promotions, need not be referred to a larger bench for consideration.

In the 2006 judgment in M. Nagraj, the Apex Court had held that it is not mandatory for the State to make reservations for SC/ST in matter of promotions. However, it had added that if the State did wish to exercise its discretion, it is supposed to gather quantifiable data showing backwardness of the class and inadequacy of representation of that class in public employment, in addition to compliance with the requirement of maintaining administrative efficiency as per Article 335.

Application of the “Creamy layer” principle

The judgment, authored by Justice Nariman, affirmed that when M. Nagaraj applied the creamy layer test to Scheduled Castes and Scheduled Tribes while upholding the constitutional amendments leading to Articles 16(4-A) and 16(4-B), it did not in any manner interfere with Parliament’s power under Article 341 or Article 342. Therefore, the Constitution Bench held that there was no necessity to revisit Nagaraj judgment in so far as it applied the creamy layer test.

Giving a stamp of approval to application of creamy lawyer principle to SC/STs, the court asserted that the objective of reservation would not be fulfilled if only the creamy layer within that class bag all the coveted jobs in the public sector and perpetuate themselves, leaving the rest of the class as backward as they always were.

"The whole object of reservation is to see that backward classes of citizens move forward so that they may march hand in hand with other citizens of India on an equal basis. This will not be possible if only the creamy layer within that class bag all the coveted jobs in the public sector and perpetuate themselves, leaving the rest of the class as backward as they always were. This being the case, it is clear that when a Court applies the creamy layer principle to Scheduled Castes and Scheduled Tribes, it does not in any manner tinker with the Presidential List under Articles 341 or 342 of the Constitution of India," Justice Nariman wrote.

Furthermore, the court advocated for harmonious interpretation of Articles 14 and 16 with Articles 341 and 342, asserting that “it is clear that Parliament will have complete freedom to include or exclude persons from the Presidential Lists based on relevant factors.” Similarly, it said that Constitutional Courts, when applying the principle of reservation, will be well within their jurisdiction to exclude the creamy layer from such groups or sub-groups when applying the principles of equality under Articles 14 and 16 of the Constitution of India. The bench expressed disagreement with Balakrishnan,C.J.’s statement in Ashoka Kumar Thakur case that the creamy layer principle is merely a principle of identification and not a principle of equality.

The Bench also held as invalid the conclusion in Nagaraj that the State has to collect quantifiable data showing backwardness of the Scheduled Castes and the Scheduled Tribes. It opined that this was contrary to the finding arrived at by the nine-judge bench in Indra Sawhney v. Union of India.

It noted that the nine-Judge Bench in Indra Sawhney had categorically ruled, “[t]he test or requirement of social and educational backwardness cannot be applied to Scheduled Castes and Scheduled Tribes, who indubitably fall within the expression “backward class of citizens”.”

SCs & STs presumed to be backward

The Court noted that Article 46, which is a provision occurring in the Directive Principles of State Policy, has always made the distinction between the Scheduled Castes and the Scheduled Tribes and other weaker sections of the people.

It then pointed out that the pattern of Article 46 has been followed in Articles 16(4) and 16(4-A), as “backward classes” in Article 16(4) is equivalent to the “weaker sections of the people” in Article 46, and is the overall genus; the species of Scheduled Castes and Scheduled Tribes is separately mentioned in the latter part of Article 46 and Article 16(4-A). This, it said, was because SCs and STs are the most backward or the weakest of the weaker sections of society, and are, therefore, presumed to be backward.

With this line of thought, the court rejected the argument that as a member of a Scheduled Caste or a Scheduled Tribe reaches higher posts, he/she no longer has the taint of either untouchability or backwardness, and that therefore, the State can judge the absence of backwardness as the posts go higher. It opined that this argument goes to the validity of Article 16(4-A).

“Since the object of Article 16(4-A) and 16(4-B) is to do away with the nine-Judge Bench in Indra Sawhney (1) (supra) when it came to reservation in promotions in favour of the Scheduled Castes and Scheduled Tribes, that object must be given effect to, and has been given effect by the judgment in Nagaraj (supra).

This being the case, we cannot countenance an argument which would indirectly revisit the basis or foundation of the constitutional amendments themselves, in order that one small part of Nagaraj (supra) be upheld, namely, that there be quantifiable data for judging backwardness of the Scheduled Castes and the Scheduled Tribes in promotional posts,” it explained.

Reservation In Promotion Need Not Be In Proportion To Population

The Court further noted that the AG requested it to lay down that the proportion of Scheduled Castes and Scheduled Tribes to the population of India should be taken to be the test for determining whether they are adequately represented in promotional posts for the purpose of Article 16(4-A).

It, however, opined that the judgment in M. Nagaraj rightly left the test for determining adequacy of representation in promotional posts to the States, opining that as the post gets higher, it may be necessary to reduce the number of Scheduled Castes and Scheduled Tribes in promotional posts, as one goes upwards.

To this end, it also took note of the contrast in the language employed by Article 330 (Reservation of seats for SCs & STs in the House of People) on one hand and Articles 16(4-A) and 16(4-B) on the other. It noted that while the test of proportionality to the population is mandated by the Constitution in Article 330, it does not do so in the other two provisions.

“The difference in language between this provision and Article 16(4-A) is important, and we decline the invitation of the learned Attorney General to say any more in this behalf,” it therefore opined.

With inputs from Manu Sebastian