Criminal Defamation: A Tool Of Oppression To Shut Out Truth 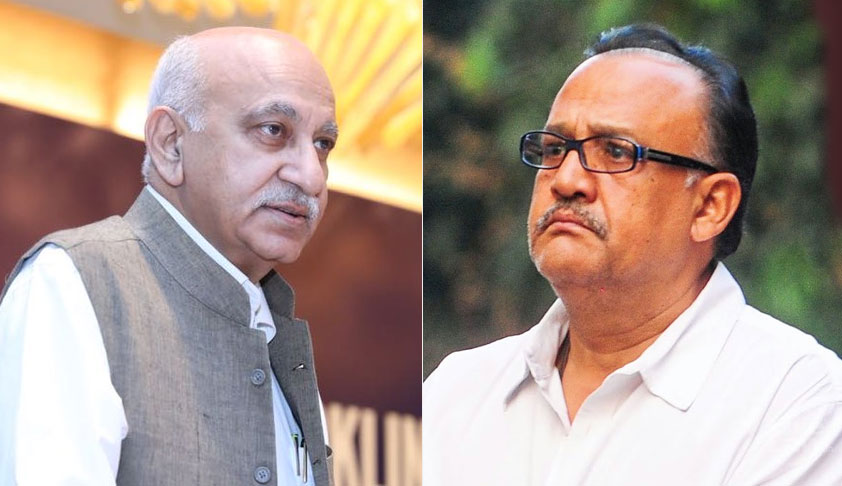 Provisions like criminal defamation enable those with power and privilege to use law as tool of oppression to shut out truthUnion Minister M J Akbar and film actor Alok Nath -who are caught up in the eye of '#MeToo' storm- have filed criminal complaints for defamation against women who have spoke against them. Though at least 15 women(till date) have come out against M J Akbar regarding acts...

Union Minister M J Akbar and film actor Alok Nath -who are caught up in the eye of '#MeToo' storm- have filed criminal complaints for defamation against women who have spoke against them. Though at least 15 women(till date) have come out against M J Akbar regarding acts of sexual harassment committed by him abusing his position as superior at work, he has chosen to go against only one of them- journalist Priya Ramani. Last week, Priya Ramani revealed in twitter that the unnamed person mentioned in the article written by her in "Vogue"  in October 2017, who was stated to be harassing his women subordinates was M J Akbar. This led to opening of floodgates of allegations by several women journalist who have worked under him.

While the allegations against M J Akbar pertain to creation of a hostile work environment through his sexually charged behaviour targeting women subordinates, the allegations against Alok Nath raised by Vinta Nanda are far more serious, attracting ingredients of rape under Section 376 IPC. After the account by Vinta Nanda, well-known actors such as Sandhya Mridul and Amyra Dastur and singer Sona Mohapatra narrated similar experiences from Alok Nath.

In the backdrop of these criminal complaints, it is worthwhile to revisit the debate regarding criminalisation of defamation. Defamation is an offence punishable with imprisonment which may extend up to two years and fine as per Section 500 of Indian Penal Code. On two occasions, the SC had observed that the validity of criminal defamation 'deserved to be examined' in the light of its impact on fundamental right to freedom of speech and expression under Article 19(1)(a) of the Constitution of India(R. Rajagopal  v. State of T. N.  1994 (6) SCC 632 & N. Ravi  v. Union of India , 2007 (15) SCC 631). However, in 2016, the Supreme Court repelled the challenge against Sections 499 and 500 of the Indian Penal Code and upheld its constitutionality in Subramanian Swamy v Union of India. The judgment authored by Justice Dipak Misra( as he was then) is a laborious read, and its inscrutable reasoning fails to satisfactorily explain the basic question 'why defamation should be  a crime?'.

Morally repugnant activities which tend to affect social order through its impact on life, limb and property of persons are regarded as crimes. This is the traditional understanding of crime. Violence is abhorred across all cultures, and hence violence against human body is regarded a punishable crime. Likewise, the concept of private property and possession forms the bed rock of most societies(those in the far left spectrum may disagree), and hence acts against properties are regarded as crimes to protect the foundational aspect of society.  Direct and tangible harm to an individual right and the existence of morally dubious state of mind such as dishonesty, criminal intent, fraud etc are the common features of all crimes. Crimes are such acts which a person with robust conscience will not find justifiable under any circumstance. They receive unequivocal condemnation from all members of society. Therefore, the State steps into picture to punish the criminal, though the victim of the crime could be a particular individual; because, it concerns the orderly and tranquil existence of society at large.

However, defamation lacks the standard attributes of a crime. It is a personal injury without any impact on the community. It is noteworthy that it stands out as an odd man in the Indian Penal Code(IPC). Though other IPC offences are neatly classified under different chapters like 'offences against property', 'offences against human body', 'offences against State' etc, Sections 499 and 500 are miscellaneously placed in Chapter XXI which is titled 'Of Defamation'. Even the draftsmen were at a loss to properly classify 'defamation', owing to its ambiguous nature.

There is no denying that loss of reputation is a real harm, regardless of its intangible and perception-based attribute. However, its impact is only person-specific. It does not threat to disrupt social order.  In this context, it is pertinent to refer to Justice Misra's comments about nature of crime in his judgment in Subramanian Swamy case : ""The concept of crime is essentially concerned with social order.".  As per this concept, defamation should be a private wrong, leading to only civil liabilities.

The justification offered by the judgment for making defamation a crime is quite wobbly. It is stated : "Individuals constitute the collective. Law is enacted to protect the societal interest. The law relating to defamation protects the reputation of each individual in the perception of the public at large. It matters to an individual in the eyes of the society. Protection of individual right is imperative for social stability in a body polity and that is why the State makes laws relating to crimes. A crime affects the society. It causes harm and creates a dent in social harmony. When we talk of society, it is not an abstract idea or a thought in abstraction. There is a link and connect between individual rights and the society; and this connection gives rise to community interest at large.Therefore, when harm is caused to an individual, the society as a whole is affected and the danger is perceived". To state that every harm to an individual affects society at large is too broad a statement. Applying this logic, any activity which affects an individual should be made a crime.

The judgment also imagined a battle between Article 21 and Article 19(1)(a) of the Constitution, on the premise that right to reputation was part of right to life under Article 21, which has to prevail over right to free speech. It was held : "Once we have held that reputation of an individual is a basic element of Article 21 of the Constitution and balancing of fundamental rights is a constitutional necessity and further the legislature in its wisdom has kept the penal provision alive, it is extremely difficult to subscribe to the view that criminal defamation has a chilling effect on the freedom of speech and expression".

The judgment does not offer cogent explanation as to how the un-enumerated, penumbral right to reputation can negate the enumerated right to free speech under Article 19(1)(a). This judgment is a rare instant where a stretched interpretation of Article 21 was used to annihilate another fundamental right!

The reasonableness of a restriction on right under Article 19 is to be tested on the basis of 'proportionality principle', which was explained by the Constitution Bench in Modern Dental College case. One of the components of proportionality principle is that 'the restriction must be such that it is absolutely necessary in that there are no alternative measures that may similarly achieve that same purpose with a lesser degree of limitation'. There exists an alternate relief for defamation in the form of civil action for damages, which causes lesser degree of limitation on the fundamental right. This aspect was not at all seen considered in the judgment. Recently, the Supreme Court of Kenya decriminalised defamation, citing that there is an alternate measure available with lesser infringement.

Another fallacy in criminal defamation is that the threshold of defence is higher than that of civil liability. Mere truthfulness of the statement is not a defence in criminal defamation. The accused has to additionally establish that the publication was justified in for "public good", as per Exception 1 of Section 499 IPC. This is in contrast to the yardstick in civil action for defamation. In Rajagopal case(supra), the SC offered more protection to free speech in defamation action by public officials, by stating that a publication, even if inaccurate, will be protected if it was not made with any actual malice. This was done by the SC by adopting the test laid down by US Supreme Court in New York Times vs. Sullivan. So, the anomaly is that a defence which might succeed in civil defamation may not succeed in criminal defamation.

The judgment also omitted to consider the 'over breadth' of the provision, and its chilling effect on free speech. The doctrine of over breadth considers a statute's "application to real-world conduct, not fanciful hypotheticals". Criminal proceedings have a coercive force, as the accused is forced to make appearance, unlike civil cases. Proceedings can be launched anywhere in the Country, based on the reach of the publication or broadcast. The accused person might have to travel to far flung areas to attend court proceedings of each day. The process itself can wear out the accused person. Knowing this, criminal complaints of defamation are filed very often as a tool of oppression, without any serious intention to convict the person.The process itself becomes the punishment!

The judgment extracted the words of Justice Brandeis in Whitney vs. California that "It is the function of speech to free men from the bondage of irrational fears. To justify suppression of free speech there must be reasonable ground to fear that serious evil will result if free speech is practiced". The judgment also observed that democracy will not thrive if free speech is curbed. But, these observations did not find any meaningful application in the ultimate result of the case.

It is true that the State has the power to criminalise even those acts which may not be morally repugnant, or may not be having social impact, like dishonour of cheques, default in payment of statutory taxes etc. However, what makes criminal defamation different is its direct impact on a constitutionally guaranteed right of free speech. As opposed to this, one cannot claim a right to default in tax payment or to dishonour a cheque.  Hence, criminal defamation stands on another pedestal, different from 'technical crimes' created by other legislations.

The judgment has omitted to consider these aspects while upholding Sections 499 and 500 IPC. The curious fact is that Justice Dipak Misra, after he became CJI, has authored several judgments which expanded the scope of free speech. It is doubtful whether Subramanian Swamy judgment will hold good in the light of the expansive interpretation given to individual liberties in Navtej Singh Johar and Joseph Shine cases. Also, several jurisdictions across the world have decriminalised defamation. The UK decriminalised it in 2009. Several states of US have repealed criminal defamation. Recently, the Supreme Courts of Kenya and Lesotho struck down criminal defamation as uncosntitutional. In 2003, Sri Lanka emerged as the pioneer in South Asia, repealing its criminal defamation laws, and only allowing for civil suits.

Provisions like criminal defamation enable those with power and privilege to use law as tool of oppression to shut out truth. Criminal defamation laws are mostly used to punish legitimate criticism of powerful people, rather than protect the right to reputation. This deters speaking truth to power. It is hoped that the decision in Subramanian Swamy case will be re-examined in the light of the recent Constitution Bench decisions, which expounded a new jurisprudence of transformative constitution and constitutional morality.

#MeToo is a poignant movement which witnessed women mustering courage to speak out after suffering in silence for years. More than punishment and justice, they were seeking empathy and closure. It is not possible to dismiss all the revelations as concocted and motivated. This movement is also a  pointer to  the deficiencies in the justice system- that it has failed to take women into confidence, due to its male hegemonic character and apparent gender insensitivity. Law has failed to provide them justice and closure; at least law can desist from being an oppressive tool. That much the system owes to the victimised womenfolk!