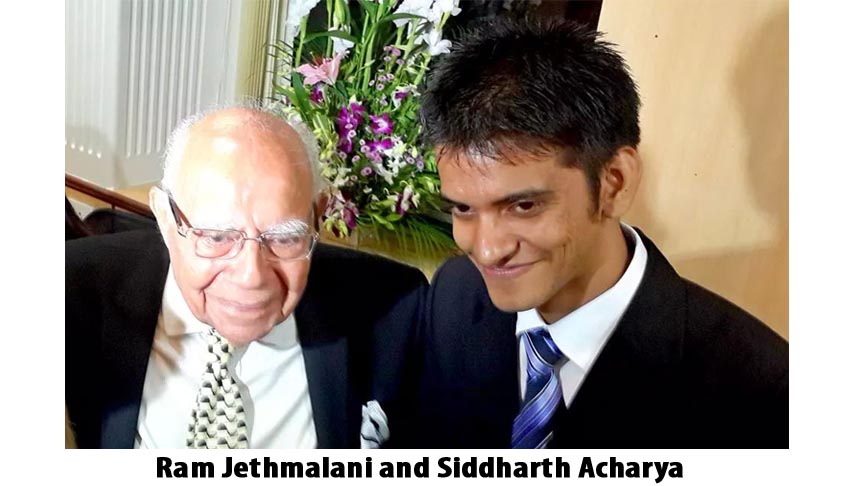 Siddharth Acharya, an ex student of Government Law College, Mumbai who hails from Bikaner, Rajasthan is currently working as an Associate in Oasis Counsel and Advisory, Mumbai. `Cinema is my passion`, he says as he tells us about his recent inclination towards film-making. Recounting his latest mini-documentary Czar Of the Bar he says, `Czar of the Bar is a six-minute film on seven glorious decades of legal career of eminent Senior Advocate Mr. Ram Jethmalani. His journey is something which has always fascinated me. My team, including assistant Kartik Taparia from GLC Mumbai did painstaking research with me for two days and I completed the film in a week. The film was backed by renowned Senior Counsel Mr. Harish Jagtiani and his wife Mrs. Shobha Jagtiani. Ms. Petruksha Deas and Ms. Minoo Dariyanani also provided inputs on research. Czar Of the Bar was launched by none other than the maverick lawyer himself, Mr. Ram Jethmalani and he praised and acknowledged the work of our team.`

The film attempts to understand him as a person, his childhood and how he rose to such great heights in his legal career despite all the adversities and controversies surrounding him all the time. Elaborating on why he shot this documentary , he says, ` There has been no sincere attempt made by anyone to understand Mr. Ram Jethmalani as a person in real life and the media has been grossly biased against him. This is what encouraged me to go for this. Mr Jethmalani`s struggle is way  different from the rest of the highly acclaimed lawyers. He fought his first case when he was just 18 and he fought for getting himself enrolled in the Bar. From Partition to the sudden death of his daughter, Rani Jethmalani he has been through a lot and still his passion for law at the age of 91 is
commendable.`

Further, Siddharth recollected about his last film `The Abandoned Cranes` which has
received an award in the United States by the Indian Community in California and he has been awarded `Harmukh Award of Excellence` by the NRI Association of United States. He also told us about his upcoming film `An Unspoken Catastrophe` based on refuges from Pakistan Occupied Jammu and Kashmir which will be screened in UNHCR, Geneva and the French Parliament soon. We wish him all the very best for all his future endeavours.