Dauntless Aruna: The pioneer of Euthanasia debate breathes her last 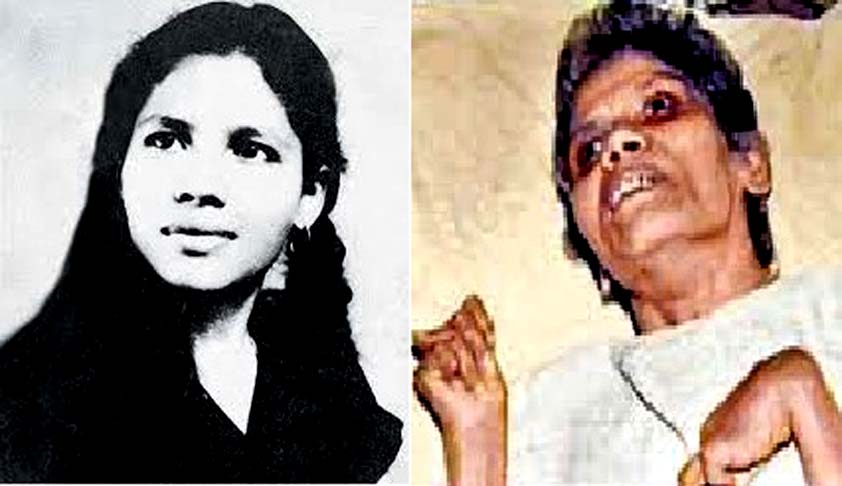 “He will wipe away every tear from their eyes, and death shall be no more, neither shall there be mourning, nor crying, nor pain anymore, for the former things have passed away.”- Revelation 21:4After fighting bravely for 42 years, lying in a vegetative state, Aruna Shanbag has passed away today. She spent her final week battling a serious bout of pneumonia and was breathing with the help...

“He will wipe away every tear from their eyes, and death shall be no more, neither shall there be mourning, nor crying, nor pain anymore, for the former things have passed away.”- Revelation 21:4

After fighting bravely for 42 years, lying in a vegetative state, Aruna Shanbag has passed away today. She spent her final week battling a serious bout of pneumonia and was breathing with the help of a ventilator.

She was rushed out of the tiny room attached to Ward number 4 that has been her abode for four decades now. The nurses tending to her noticed that she posed difficulties in breathing and immediately rushed her to the medical ICU.

KEM Hospital Dean Avinash Supe has made a public appeal to help trace any relatives or people close to Shanbag who can get in touch with the hospital immediately.

I call it a fight in the beginning of the article, because it surely has been one. Shanbag sparked the worldwide debate on mercy killing or euthanasia, while being confined to a hospital room for more than 4 decades.

The pretty, young and independent woman that she was, Shanbag was working as a nurse at Mumbai’s King Edward Memorial (KEM) Hospital when she was sexually assaulted by a hospital ward boy in 1973. The ward boy, Sohanlal Bhartha Walmiki, throttled her with a dog chain, cutting off blood and oxygen supply to her brain resulting in injuries to the brain stem and cervical chord injury. She had been in a vegetative state since and confined to a bed at the KEM hospital where nurses and the hospital staff take care of her. In one day, her dreams, her aspirations, her life was snatched away from her.

The assailant was traced soon after the crime and was convicted. He served two concurrent seven year sentences. Little is known about his whereabouts since his release from the prison.

The charge under which he was convicted was stealing her jewellery and watch since initial medical examination ruled out rape as her hymen was intact. She was menstruating on that day. And so, he did not penetrate her but sodomized her instead. Subsequent medical reports proved that she bled for days together from the anus.

Speaking to Zee Media today, Former journalist and author Pinky Virani, said "Her actual death happened in 1973 (referring to the tragic attack on her) now what has happened is her legal death. Our Aruna has given our country a big thing in form of a law on passive euthanasia."

Ms. Virani had narrated the story of the ailing nurse in her 1998 non-fiction book called 'Aruna's Story', while Duttakumar Desai wrote the Marathi play, 'Katha Arunachi' in 1994-95, which was staged under director Vinay Apte in 2002. In the last part of the novel Pinki says:  “How I wish I could give life to Aruna’s lifeless brain”.

However, the counsel for the hospital was unequivocal in denying death to Aruna on behest of the Court and elucidated various instances wherein the patient communicated in gestures her aversion/interest to certain foods, sounds and people which only went on to suggest that there existed life within her and by allowing for euthanasia to be administered, the Hon’ble Court would order for termination of life and thereby set a dangerous precedent for all critically ill patients.

In a landmark judgment, the Supreme Court went on distinguish between ‘active’ and ‘passive’ euthanasia and held that causing the death of a person  who is in a permanent vegetative state, with no chance of recovery, by  withdrawing artificial life support is not a “positive act of killing”.

A plea for voluntary passive euthanasia was referred to a Constitution Bench in February last year. The decision of a bench headed by Chief Justice P Sathasivam came on a plea by an NGO Common Cause that a person, who is afflicted with a terminal disease, should be given relief from agony by withdrawing artificial medical support provided to him which is medically referred to as passive euthanasia.

Aruna’s life was nothing short of a struggle. Aruna’s family seemed to have forgotten her long back. Her father has passed away before the tragic incident took place and her mother, who is also no more, deserted her soon after the event. Her brother, Balakrishna Shanbag had been living in Ankola not far away from Mumbai. When asked about his wish for Aruna, Anand said, “I almost wished that God would give her a quick death, and deliverance from this ordeal.” She lost her only relative in the city, her elder sister Shanta Nayak, two years ago. Nayak had expressed her inability to take care of Shanbag given her own financial constraints. Contrary to her brother, Shanta’s wish was that Aruna died of natural causes. Three of her other sisters got married and moved on with their lives.

Her fiancé, after waiting patiently by her bedside for 4 years, finally gave in to family pressures and married. The day before his marriage, he visited her and giving her motionless body one final hug he left, never to visit her again.

However, Shanbag was “a child” to the KEM nurses. They claimed Aruna to be her own. "With every new batch of entrants, the student nurses are introduced to her and they are told she was one of us and she continues to be one of us," an affidavit by the hospital staff told the judges of the hospital’s tradition. They described Ms. Shanbag as a "child we have cared and nurtured for 33 years.” They said the very idea of putting her “to sleep” is “extremely difficult for anybody in the hospital to accept.”

She did have people who loved her and she fought for a cause. It is the agony that let go of her and gave up, not the other way round.