Dear Constitutional Courts, Please do Not Quash an FIR before it ripens into a Police Report; An Analysis of Yeddurappa Judgment 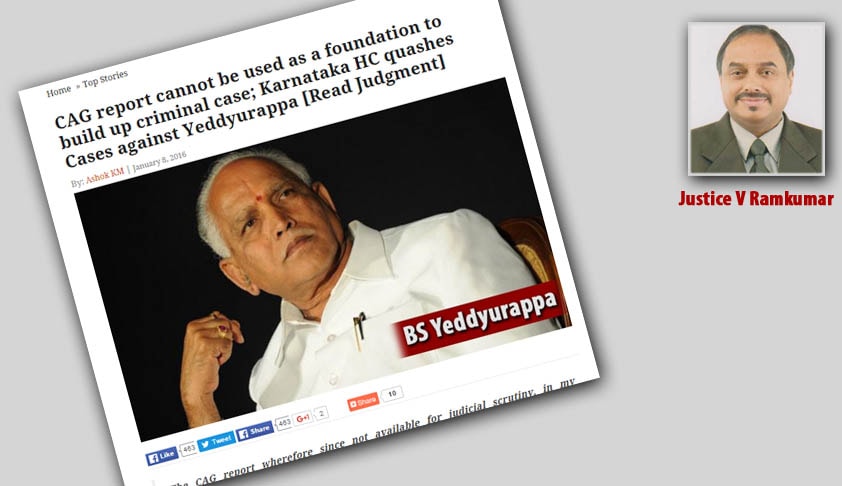 As per the common order dated 05-01-2016 in  Shri. B.S. Yeddyurappa Vs. The State of Karnataka (Writ Petition No. 41228 of 2015 and connected cases), a learned Judge of the Karnataka High Court, has quashed fifteen F.I.Rs. registered against the accused (former Chief Minister of Karnataka ) inter alia, for offences under Sections 409 and 420 of the Indian Penal Code ( “IPC” for short)...

As per the common order dated 05-01-2016 in  Shri. B.S. Yeddyurappa Vs. The State of Karnataka (Writ Petition No. 41228 of 2015 and connected cases), a learned Judge of the Karnataka High Court, has quashed fifteen F.I.Rs. registered against the accused (former Chief Minister of Karnataka ) inter alia, for offences under Sections 409 and 420 of the Indian Penal Code ( “IPC” for short) and Sections 13(1)(c) and 13(1) (d) of the Prevention of Corruption Act, 1988 ( ‘P.C.Act for short) and Sections 3, 4 and 8 read with Section 9 of the Karnataka Land (Acquisition on Transfer) Act, 1991. The High Court has further directed that Report of the Comptroller and Auditor General of India ( “ CAG Report” for short) shall not be used against the accused if any action is contemplated against him.

WHICH IS THE JURISDICTIOIN EXERCISED?

2. Eventhough the writ petitions filed before the Hon’ble High Court were presumably under Article 226 of the Constitution of India, it is not clear whether the jurisdiction finally exercised by the High Court is under Article 226 of the Constitution of India or under Section 482 of the Code of Criminal Procedure, 1973 ( “the Cr.PC” for short). This is what the learned Judge has concluded in paragraph 37 of the common order:-

‘ Law on the question of ultimate jurisdiction of this  Court in exercise of the power vested under Article 226 of the Constitution of India and Section 482 of the Code is well settled from long lineage of judicial pronouncements from State of Haryana and Others Vs. Ch. Bhajan Lal and Others reported in AIR 1992 SC 604”

A case can be said to be pending before a Criminal Court only after the Court has taken cognizance of the offences either on a police report ( charge sheet) or on a private complaint. Here, in this case, a charge sheet is yet to be filed.

3. If on the contrary, the jurisdiction which the High Court eventually exercised was under Article 226 of the Constitution, then also, in my humble opinion, it is not permissible for the Constitutional Courts to quash the F.I.R. (Vide the original article of this Author titled “ Can the Constitutional Courts Quash an F.I.R.? annexed hereto and also reported in (2014) 8 SCC Journal 10 “Quashment of F.I.R. by Constitutional Courts”. The purpose of an FIR is only to set the Criminal Law in motion and an FIR ( First Information Statement) need not be lodged by a victim or eye-witness. The FIR so lodged will necessarily be an inchoate and incomplete document which may or may not fall short of the necessary ingredients of the offence. The hazy picture revealed by the FIR will be rendered more and more clear only when all the incriminating material to identify the offence and the offender is unfolded during investigation. Unlike the final report (police report) or a private complaint, an FIR is not a document for instituting a case. No court can take cognizance of an offence on the basis of an FIR which is not one of the sources for taking cognizance of an offence as enumerated under Section 190 Cr.PC. Therefore, according to me, the Hon’ble High Court went wrong in quashing the FIR.

THE GROUNDS OF QUASHING THE FIR

4. The basis for the High Court quashing the F.I.R. was the following:-

i) The complaint annexed to the F.I.R is not an information either given orally or in writing to an officer in charge of a police station within the meaning of Section 154 Cr.P.C. What was annexed to the F.I.R. was only a complaint given by the complainant, namely, Jayakumar Hiremath to the Lokayuktha in Form No. 1 under Section 7 of the Karnatka Lokayuktha Act, 1984. (Paras 25, 26 and 29).

ii) Eventhough the view taken by the Gauhathi High Court in M.S. Associates Vs. Union of India, is more realistic for treating the CAG report as a source information, the said report cannot be used as the foundation to build up a criminal case and it cannot be made part of investigation ( Para 35) .

In my humble view, both the above grounds are legally unsustainable.

WHETHER THERE WAS LACK OF “ INFORMATION” WITHIN THE MEANING OF SECTION 154 Cr.PC.

5. This was not a case where Sri. Jayakumar Hiremath, the de facto-complainant, had straightaway approached the Lok Ayuktha. He had initially approached the Hon’ble High court with Writ Petition No. 15502/2013 ( PIL) for a direction to the C.B.I. to conduct a thorough investigation into the “ land scam.” It was the Division Bench headed by the Chief Justice which held that the complainant has an alternative and more appropriate remedy of filing a petition under Section 7 of the Karnataka Lok Ayuktha Act, 1984 and that the Lokayuktha has the power to investigate any offence. The writ petition was thus disposed of with liberty to the writ petitioner to move the Lokayuktha for appropriate remedy. Pursuant to the above, Sri. Jayakumar Hiremath filed a complaint before the Lokayuktha to investigate the aforementioned offences allegedly committed in gross misuse of authority with corrupt motive and causing heavy loss to the State Exchequer and requesting to take suitable action under law. The Lokayuktha took on file the above complaint and called for from the Chief Secretary the names and details of the officers involved in the land scam. Since there was no response from the Government, the Lokayuktha by invoking its power under Section 15(3) of the Karnataka Lokayuktha Act referred the mater to the Director General of Police, Criminal Investigation Department ( “ CID” for short) for investigation and report. On receipt of the report from the CID the Lokayuktha forwarded the file to the Superintendent of Police attached to the Lokayuktha which is a notified “ police station” empowered to investigate the offences under the IPC and P.C. Act. It was under these circumstances that the police attached to the Lokayuktha registered the case. The source of information was the CID report incorporated in column 9 of the F.I.R Admittedly, the signature of Sri. Jayakumar Hiremath as the complainant is found on the F.I.R. When the CID report constituted the source of information for the Station House Officer ( ‘ SHO’ for short) to register the crime, the High Court should not have allowed a hair-splitting argument to discuss whether it was a regular FIR registered under Section 154  Cr.PC.or a suo motu F.I.R. registered under Section 157 Cr.P.C.  It was an FIR registered on the basis of a credible source information.

WHETHER THE ‘CAG REPORT’ COULD ALSO CONSTITUTE A SOURCE INFORMATION FOR REGISTSERING A CRIME?

6. This question is rally academic since there was already a CID report, prima facie, showing the commission of the alleged offences by the former Chief Minister. Moreover, the High Court having chosen to follow the decision of the Gauhati High Court regarding the legal status of the CAG Report, in my opinion, erred in holding that the said report cannot be used as the foundation to build up a criminal case. The further direction that the CAG Report shall not be used against the accused if any action is contemplated against him, was absolutely unwarranted.

THE QUASHMENT OF THE F.I.R. BEHIND THE BACK OF THE FIRST INFORMANT

7. After the decisions of the Apex Court in Bhagwant Singh Vs. Commissioner of Police ( 1985) 2 SCC 537 = AIR 1985 SC 1285- 3 Judges; Union Public Service Commission  Va. Papaiah and Others – AIR 1997 SC 3876; Gangadhar Janardan Mhatre Vs. State of Maharashtra (2004) 4 SCC 359 = AIR 2006 SC 1037; Sanjay Bansal and Another Vs. Jawaharlal Vats and Others (2007), 3 SCC 71, it is no more open to any Court to prematurely terminate a criminal case behind the back of the complainant/whistle blower without giving him an opportunity of being heard. Far from giving Sri. Jayakumar Hiremath any such opportunity, he was not even made a party to the writ petitions. This also vitiates the common order of the Hon’ble High Court of Karnataka.

Read also Can the Constitutional Courts Quash an FIR ?