Death in Kollam Firework – Who are responsible ? 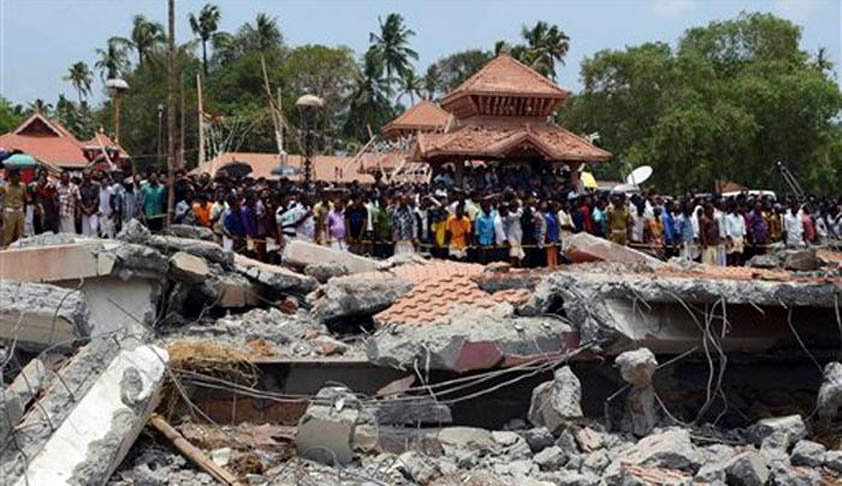 Fireworks are displayed using explosives. Explosives have made certain good and bad contributions to the history of mankind. But the benefits which explosives have produced far outweigh their misuse in certain pursuits. Recent deaths in Kerala will prove this fact.Fireworks are of two types, noise making and colorful. Colorful fireworks are enjoyed by all. But noisy fireworks are not accepted...

Fireworks are displayed using explosives. Explosives have made certain good and bad contributions to the history of mankind. But the benefits which explosives have produced far outweigh their misuse in certain pursuits. Recent deaths in Kerala will prove this fact.

Fireworks are of two types, noise making and colorful. Colorful fireworks are enjoyed by all. But noisy fireworks are not accepted by most. Noise creates vibrations. Excessive noise can have severe physiological and psychological impacts on persons. The impacts include loss of hearing, interference with ability to perform tasks, loss of sleep, effect on performance and behavior as well as annoyance. Noise can damage equipment which are fragile. Glass panes near the place where noise is generated may break. Cracks are developed in delicate parts in electronic equipment like computers.

Most of the Temples in Kerala use these noisy fireworks (Vedikkettu) . They are commonly called as Gundu (a form of dynamite), Kathina (another type of noisy firework where the gun power is put inside a metal shell), Olapadakkam, etc. Kathina, is a form of religious offering in certain temples like Sabarimala. These noisy fireworks are used for festivals in Kerala, not as a ritual, but as an item of festival. Thrissur Pooram is a glaring example of usage of extensive explosives.

Fireworks are prohibited in temples having Krishna as deity, who is considered to be a child god (Unnikrishnan). Children are afraid of noise generating fireworks. In famous worship places like, Guruvayoor etc, fireworks are not used due to this religious reasons. But in Thiruvambady Temple (where the main diety is Krishna), fireworks are used for the famous Thrissur Pooram. Organizers of these fireworks explain that such fireworks are meant for the Devi, a deity kept on the side of the main temple. The organizers conveniently ignore the Ambadi Krishnan. Ambadi means the place where Krishna had his childhood.

Like Krishna, children are afraid of these noisy fireworks. Most of these noisy fireworks are conducted for the festivals during early hours from 3 to 4 am on the concluding day of the festivals. After a weeks celebration, the organizers and the persons who are the beneficiaries of the festival (shops and hotels) will alone be enjoying it. Even the temple will be closed at this odd hour. Have they not thought of the people who are taking their deep sleep at this odd hour? What about the hundreds of people who are in the Medical College Hospital at Thrissur, near to which the fireworks are being conducted. How many persons really enjoy this noise making fireworks at early hours?

For the display of fireworks in public places, sufficient safeguards are prescribed under law. Several conditions are prescribed in the licences. No fireworks shall be ignited within 200 meters of any place where explosives, any flammable substance or other hazardous substances are stored. A minimum set off of at least 200 meters should be maintained from hospitals, nursing homes, schools or temple, unless consent from the local authorities and the owner or its agent is obtained. No electrical wire shall be allowed within 10 meters of the area where fireworks are laid down. There will not be any place in Kerala, where these conditions are followed.

Government of India has prohibited the manufacture, possession and importation of any explosive consisting of combination containing Sulpher or Sulphuret in admixture with chlorate of potassium or any other chlorate. This prohibited combination is used extensively in Kerala for the manufacture of Dynamite (Gundu). It creates a loud noise.

District Authorities are empowered to grant licence for the manufacture of fireworks/gun power upto 15 kgs. With this power several manufacturers have commenced their operations as “Cracker Units”. There is no machinery to check up as to whether these units are working on strict compliance with the conditions laid down in the licence. These Cracker units, are manufacturing all types of dynamites and other fireworks, which have a flourishing market through out Kerala, due to religious sentiments.

"Enactment of a law, but tolerating its infringement, is worse than not enacting law at all. The continued infringement of law, over a period of time, is made possible by adoption of such means which are best known to the violators of law. Continued tolerance of such violations of law not only renders legal provisions nugatory but such tolerance by the Enforcement Authorities encourages lawlessness and adoption of means which cannot, or ought not to be tolerated in any civilized society. Law should not only be meant for law abiding but is meant to be obeyed by all for whom it has been enacted. A law is usually enacted because the legislature feels that it is necessary."

We have abandoned the customary practice of “Sati” for the reason that it takes away the life of innocent persons. Human and Animal sacrifice in temples have been stopped. We should also stop the use of noisy fire works in temple. Most of the religious institutions have created web sites. Temple halls are used for other programmes. Crores of rupees are collected from the public for construction activities. But at the same time these so called “Organisers” are not broadminded to prevent the wastage of money on activities like noise making fireworks. Deaths due to explosion on fire cracker units, or festivals are common in Kerala. At least ten persons die in a year due to the usage of explosives. Are we not responsible indirectly for their death. Does God need this type of religious offering? Prayers are offered in silence. God is not deaf and do not like noise. It is high time that we should keep the sanctity of religious institutions without hurting anybody. Your freedom ends where the other man's nose begins.