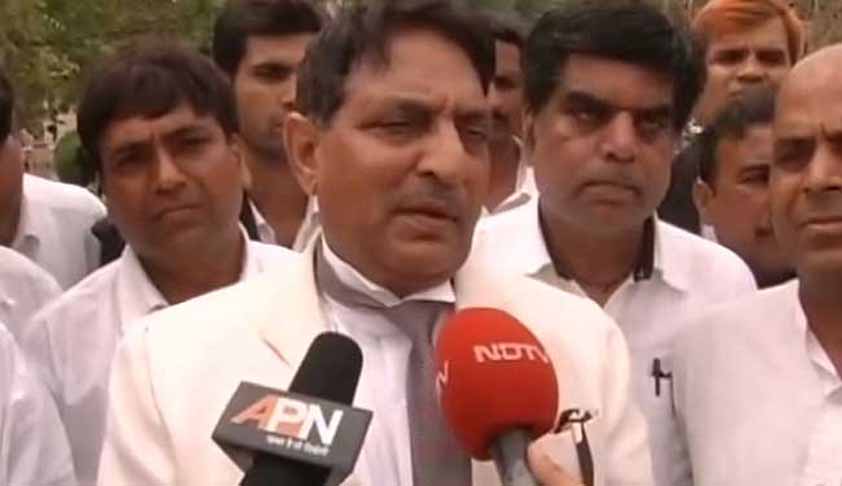 In a 139-page judgment, Justice Mahesh Chandra Sharma of the Rajasthan High Court has passed unprecedented directions to declare cow as the national animal of India.These directions were passed while hearing a civil writ petition filed by one Jago Janta Society seeking directions to save cows kept in Jaipur’s Hingonia gaushala and other cow sheds, and also to provide them with green fodder...

In a 139-page judgment, Justice Mahesh Chandra Sharma of the Rajasthan High Court has passed unprecedented directions to declare cow as the national animal of India.

These directions were passed while hearing a civil writ petition filed by one Jago Janta Society seeking directions to save cows kept in Jaipur’s Hingonia gaushala and other cow sheds, and also to provide them with green fodder and cattle feeds.

The said petition was filed after an article was published in a Rajasthan daily on November 16, 2010, entitled Ye Gaushala Hai Ya Vadhshala (Is this a cow shed or slaughterhouse). It was stated in this article that every day 15-20 cows are dying in the Jaipur gaushala.

Upon perusal of all the material available on record, Justice Sharma passed the following directions:

(1)    Keeping in mind that cattle and calves are weak living beings, Hindus have a deep devotion towards the cow, and Nepal, being a Hindu state, under its new constitution, has declared cow as their national animal. Also, agriculture and animal husbandry are the primary contributors to the Indian economy. Along with this, keeping in mind under Articles 48 and 51A (g) of the constitution, providing cows the status of a legal entity, it is expected of this government to declare cow as the national animal.

Thus, the Chief Secretary, Government of Rajasthan, and the Advocate General are being appointed as persons in loco parentis for preservation of cattle and to take appropriate steps in order to get cow declared as the national animal.

(2)    The Chief Secretary and the Advocate General will take appropriate steps to communicate the sentiments of this court with the respective departments of the Central government for preservation and protection of cattle, also to get cow the status of legal entity and declare it as the national animal.

(3)    Director/Chief of Anti-Corruption Bureau of the state government is directed to personally conduct an inquiry into the corruption allegations with regard to Hingonia gaushala. In case someone is found guilty of corruption, an FIR can be registered against the person and a report of the same be presented before this court.

(4)    It is also expected of the state government to prevent any encroachment on the said land for the Hingonia gaushala as laid down in the deputy collector’s report.

(5)    It is expected of the state government and the municipality to ensure that there is no shortfall in funds for overall development of the Hingonia gaushala.

(6)    It is also expected of the state government to increase the punishment for cow slaughter under the Rajasthan Bovine Animal (Prohibition of Slaughter and Regulation of Temporary Migration or Export) Act, 1995, to life imprisonment so that bovine animals can be protected.

(7)    It is expected of the animal husbandry department of the state government to provide necessary funds for construction of a boundary wall, new cow sheds, storage of cattle feed, construction of storage house, water, electricity, telephone, bio-gas plant as stated in the report by Hare Krishna Movement, Jaipur.

(8)    It is expected of the state government to monitor the expenses of Hingonia gaushala to ensure that funds meant for the said gaushala are not misused in any manner.

(9)    Ever since Hare Krishna Movement, Jaipur, adopted the administration of Hingonia gaushala, conditions have improved, therefore, it is expected of the state government and the municipality to support Hare Krishna Movement in its overall development of the gaushala.

(10) If Hare Krishna Movement faces any difficulty with regard to encroachments on the land meant for the gaushala, then an application can be filed before the Commissioner, Jaipur Development Authority and CEO, Nagar Nigam (Municipality) and immediate action must be taken by these authorities.

(11) It is expected of the state government and Jaipur Municipal Corporation to grant permission for establishment of a ved pathshala or a similar school or any such work which is mentioned in the agreement between the gaushala and Hare Krishna Movement, Jaipur Charitable Trust.

(12) It is expected of the Forest Department to plant 5,000 trees every year in Hingonia gaushala and take care of their maintenance.

(13) It is also expected of the state government to ensure that any incorrect entry in the Revenue Records with regard to the said land for Hingonia gaushala is rectified. Along with this, all development activity in the gaushala must take place according to the DPR.

(14) It is expected of all interested parties to comply with the directions issued by HC on March 16, 2012, based on a mutual agreement between them. A committee comprising of Sajjan Raj Surana, Poonam Chandra Bhandari, Lalit Sharma, Vijay Singh Punia, President and Secretary of the Rajasthan High Court Bar Association will ensure that all the directions of the high court passed until now are complied with. In case, the committee finds that directions are not being complied with, then the committee can issue a contempt notice to the concerned party.

(15) If any person or organisation wishes to file a PIL/Petition before the high court seeking declaration of cow as the national animal, they are free to do so.

(16) It is also expected of the state government to take necessary action against any person who fails to discharge any responsibility towards Hingonia gaushala.

(17) The Jaipur Development Authority Commissioner, CEO Jaipur Municipal Corporation and UDH Secretary must visit Hingonia gaushala along with their staff at least once a month, in order to solve problems or difficulties being faced at the gaushala.

(18) In case, the court commissioner and other advocates who have constantly monitored Hingonia gaushala find any indiscipline or shortcoming they can state the same in writing to the authority concerned, who may take action to solve the problem within 15 days. If such action is not taken, court commissioner may file an application before the high court.

(19) Arrangements must be made to operate upon blind cows, if there is any infrastructural requirement then the same must be fulfilled within 15 days.

(20) Deputy Registrar is directed to provide a copy of this order free of costs to all advocates concerned.