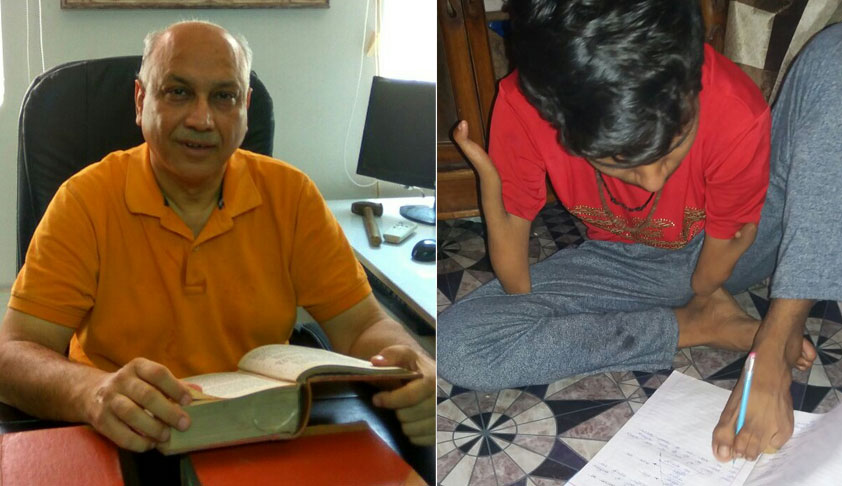 "The Delhi High Court has given me wings.""I can now do everything that everyone else can do. I can draw, sketch, paint my dreams with my own hands," says an ecstatic Ritik, born with congenital deficiency called bilateral elbow disarticulation.On November 1, the Delhi High Court bench of Acting Chief Justice Gita Mittal and Justice C Hari Shankar ensured that Ritik gets prosthetic arms and...

"The Delhi High Court has given me wings."

"I can now do everything that everyone else can do. I can draw, sketch, paint my dreams with my own hands," says an ecstatic Ritik, born with congenital deficiency called bilateral elbow disarticulation.

The eldest of three siblings, he is a keen painter and has been using his left leg to put his art on paper.

His mother Usha, who has been running from pillar to post for him, is almost celebrating the high court order for which she thanks advocate and social activist Ashok Aggarwal.

On a petition moved by Aggarwal, the high court directed the government to ensure that he gets prosthetic arms within two months.

After being pulled up by the bench, Sanjoy Ghose, additional standing counsel for Delhi government, had handed over to the court a letter dated October 31by Dr JC Passey, medical director of Lok Nayak Hospital, addressed to principal secretary (education) of the Delhi government that Ritik can be fitted with prosthetic limb within 2 months and the same would cost around Rs 5 lakh. As per the Delhi government scheme, money will be organised through Delhi Arogya Kosh.

Dr Passey had called for expediting the process."Delhi government shall abide by the terms of the letter dated October 31st," the court said in its order.

The bench also made it clear that Ritik will be available for all medical tests and any other formalities as required by the Delhi government to expedite the process.

Legal tussle with landlord and chance meeting with Ashok Aggarwal

Usha shares how she spent years to see her son get some medical assistance.

"Ritik was just two when I reached AIIMS. The doctors there turned me away saying there was nothing they could do to help him," Usha said.

"We visited several doctors and hospitals, but in vain," she said.

Usha and her husband, who runs a small sweet shop, were visiting Tis Hazari courts sometime last year for hearing in their dispute with their landlord who has been pressing them to vacate the house, when they saw a huge crowd, including many sick and infirm, outside an advocate's chamber.

Upon inquiry, the munshi of their counsel told them about legal assistance provided by Aggarwal to the needy in the field of health and education.

"We then joined the crowd one morning outside Sir's (Aggarwal) chamber and it took us one year to gather all documents etc and finally get success," shared Usha.

Aggarwal said he first sent them to VIMHANS, which gave them an estimate of Rs 5 lakh.

"Then we visited LNJP and got an estimate of Rs 13 lakh for the advanced prosthetic limbs. I then wrote to Chief Minister Arvind Kejriwal and the Ministry of Social Justice, but finally had to move court.

"It was after being pulled up by the court and its strict mood that the government nudged," Aggarwal said.

Aggarwal said the Rights of Persons with Disabilities Act, 2016, mandates the governments to provide assistive devices to students with benchmark disabilities free of cost up to the age of 18 years.

"No one feeds any one in today’s world. I am happy that my son, who has been dependent on his school mates and others for even carrying his books, will now shoulder his own responsibilities," Usha said with a smile.