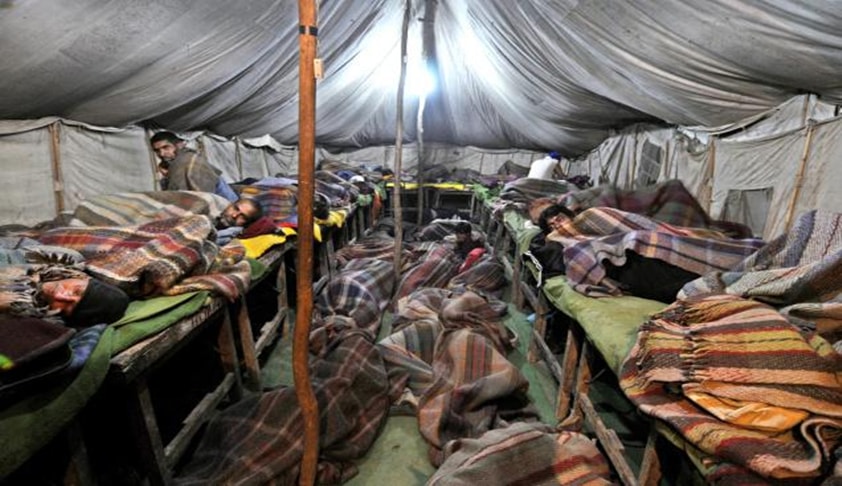 Coming to the aid of hundreds of homeless persons in the city, the Delhi High Court on Friday granted an interim stay on the closure of 38-night shelters in Delhi.In an urgent in-chamber hearing on a petition moved by social activist Sunil Kumar Aledia, a bench of Acting Chief Justice Gita Mittal and Justice C Hari Shankar directed the Delhi Urban Shelter Improvement Board (DUSIB), which...

Coming to the aid of hundreds of homeless persons in the city, the Delhi High Court on Friday granted an interim stay on the closure of 38-night shelters in Delhi.

In an urgent in-chamber hearing on a petition moved by social activist Sunil Kumar Aledia, a bench of Acting Chief Justice Gita Mittal and Justice C Hari Shankar directed the Delhi Urban Shelter Improvement Board (DUSIB), which had decided to close down 38 temporary shelters running in tents, to maintain status quo till April 2, the next date of hearing while also seeking a status report in this regard.

An urgent hearing was granted on a petition moved by Aledia challenging the office order dated March 12 passed by Deputy Director, DUSIB, Night Shelter, II, whereby closure of 38-night shelters have been ordered despite the fact that these night shelters are to remain open till March 31.

“Issue notice to show cause as to why rule nisi be not issued… It is directed that till the next date of hearing, the respondent shall maintain status quo with regard to the night shelters,” the court ordered on Friday.

The DUSIB sought time to file a status report. The court granted it 10 days’ time posting the matter for hearing on April 2.

It is to be noted that DUSIB had decided to close down the temporary shelters (in tents) from March 15 citing low occupancy and onset of the summer season.

However, Aledia’s counsel Kamlesh Kumar Mishra informed that the issue concerns life and livelihood of the homeless persons and DUSIB has decided to close down these temporary shelters citing low occupancy even when the ground reality is completely the opposite.

He also relied on the report of various NGOs managing the shelters, as available on DUSIB’s website, which clearly shows high occupancy at the 38-night shelters in question, especially in areas with high concentration of homeless persons like Kashmere Gate, Yamuna Pushta, Chandani Chowk; Fatehpuri, Fountain Chowk Etc.

In the petition filed by advocate Mishra and Sanjay Baniwal, it is alleged that the DUSIB has decided to close down the temporary shelters after it was ordered by the high court in a connected matter to carry out a safety audit of the night shelters.

He added that on March 6, in the wake of fatal fire at Dandi Park night shelter, the high court had directed the government agencies concerned to conduct a joint inspection of the electrical facilities and fire safety audit in two weeks and draw up a proper action plan to ensure that a standard document is prepared regarding provision of the electrical facilities and fire safety measures in the night shelters.

A man had died in the fire that engulfed Dandi Park night shelter in north Delhi near Kashmiri Gate ISBT on March 4.

Aledia also prayed that a survey be done by the agencies of the state, including but not limited to the DUSIB, by deploying appropriate agencies to ascertain the actual numbers of the homeless persons in Delhi so as to make appropriate plans and arrangements for their life, safety, and livelihood.

Mishra relied on Ahmedabad Municipal Corporation v Nawab Khan Gulab Khan & Ors wherein the Supreme Court had way back in 1997 stated that it is the duty of the state to provide right to shelter to the poor and indigent weaker sections of the society in fulfillment of the constitutional objectives.

He said the right to residence and settlement is a fundamental right under Article 19(1)(e) and it is a facet of inseparable meaningful right to life under Article 21, as held by the apex court in PG Gupta v State of Gujarat & Ors.

Read the Order  and Petition Here