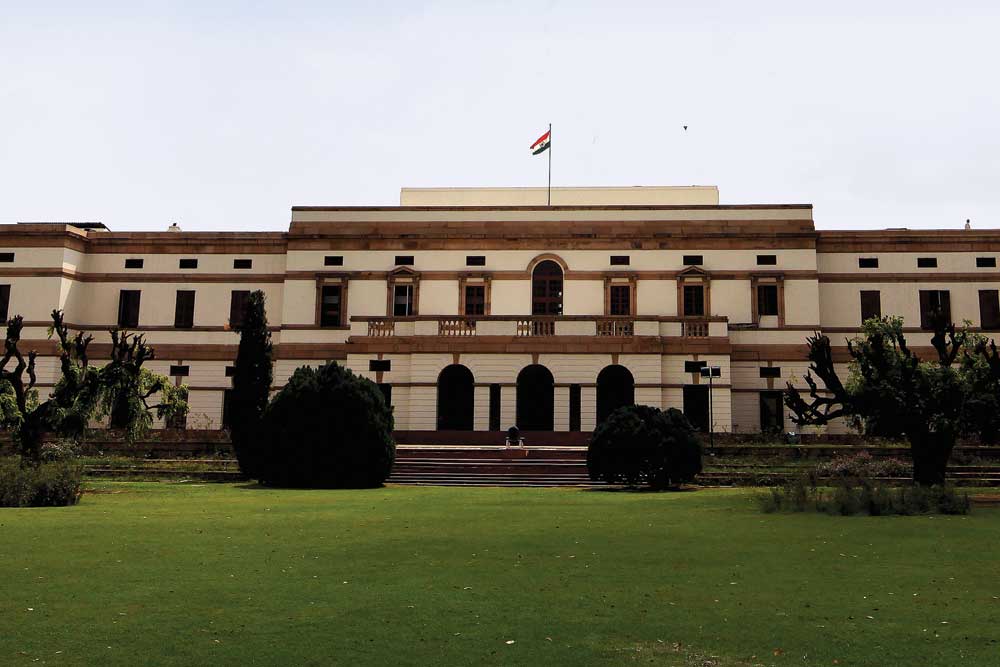 The Delhi High Court on Thursday stayed the notice of eviction issued to the Jawaharlal Nehru Memorial Fund (JNMF), a charitable trust chaired by Congress leader Sonia Gandhi by which it was asked to vacate its premises at Teen Murti Bhavan, once the residence of India’s first Prime Minister Jawaharlal Nehru.Justice Anu Malhotra also stayed the eviction proceedings in the matter before...

The Delhi High Court on Thursday stayed the notice of eviction issued to the Jawaharlal Nehru Memorial Fund (JNMF), a charitable trust chaired by Congress leader Sonia Gandhi by which it was asked to vacate its premises at Teen Murti Bhavan, once the residence of India’s first Prime Minister Jawaharlal Nehru.

Justice Anu Malhotra also stayed the eviction proceedings in the matter before the estate officer and issued notice to the Directorate of Estates under the Union Ministry of Housing and Urban Affairs on a petition moved by JNMF wherein it claimed that its occupancy of “Old Comptroller’s office” within the boundary of Teen Murti Bhavan is not illegal as the said property is not a public premises but the property of Nehru Memorial Museum and Library (NMML) and that the show-cause notice dated October 15 and the consequent order of the estate officer have been issued with ulterior political motives.

The government had reportedly issued the eviction notice to JNMF stating that it is planning a museum for all the former prime ministers of the country on the 25-acre Teen Murti Bhavan complex and needed space to expand.

JNMF was represented before the high court by senior advocate Kapil Sibal.

In its petition filed through advocate Priyansha Indra Sharma, JNMF submitted that the “impugned show cause notice has been issued in pursuance of the ulterior political motives by the incumbent Central Government to destroy and efface the legacy and history of the contributions of Shri Jawarhalal Nehru. The legacy of Shri Nehru is a historical fact which is now sought to be effaced by the Central Government led by the BJP which is totally opposed to the secular and inclusive principles which Shri Nehru stood for”.

The petition also challenged the proceedings before the estate officer saying "the impugned proceedings are a part of a larger design to efface and destroy the legacy and contributions of Nehru and create a new historical narrative”.

The petition also challenged the October 23 order passed by estate officer KC Sharma on the grounds that he had no authority to conduct the proceedings as the notice was issued by some other officer and that despite specific request for eight weeks’ time to file appropriate response to the show cause notice, he granted 12 days time for filing of evidence which comprises voluminous records dating back to the year 1964.

JNMF was established on August 17, 1964, for charitable works and the promotion of scientific education, culture etc.

Detailing the contribution JNMF has made in NMML’s growth as a centre of academic excellence with its rich archives and even the Nehru Planetarium which was donated to NMML by JNMF, the petitioner said it has a “close and intimate bond” with NMML, which was set up by the Centre on April 1, 1966, at the Teen Murti House and an Office memorandum issued by the government in 1967 clearly stated that all the buildings in the premises of the east of the Teen Murti will remain the property of NMML.

It submitted that way back in 1967, the Secretary of JNMF had requested the Director of NMML to allow JNMF to continue to work from the premises and that the Directorate of Estates had also informed that the Old Comptroller’s office which is located in within the boundaries of Teen Murti House is the property of NMML.

“In these circumstances, it is clear that the Directorate of Estates has no jurisdiction to initiate any proceedings in relation to the property of NMML which is a registered society and the JNMF is in legal occupation of the demised premises.

“…the premises of NMML does not fall under the definition of ‘public premises’ of section 2(e) of the PP Act. In view thereof, the very assumption of jurisdiction by the Estate Officer by issuing the show cause notice under Section 4 dated 15.10.2018 is patently illegal, ex-facie without jurisdiction and without application of mind,” the petition said.