Delhi HC Warns Of Penal Action Against DUSU Candidates Who Defaced Capital, But Not Interested In Restoring It [Read Order] 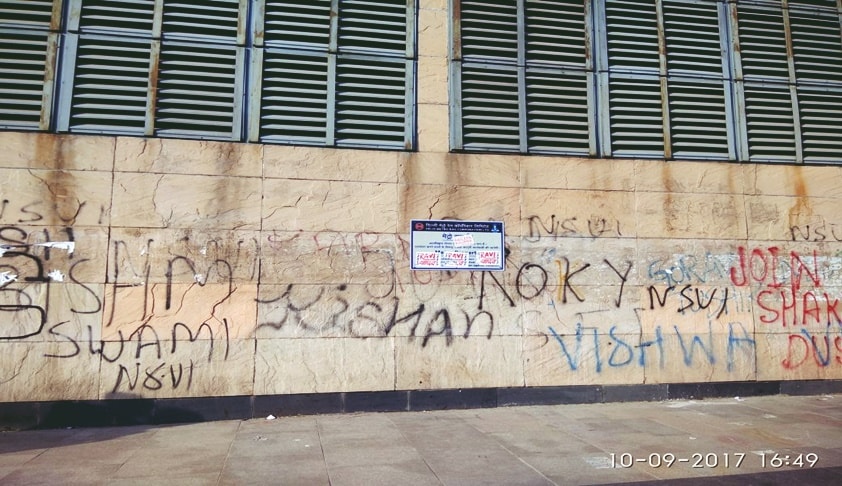 The Delhi High Court on Friday suggested taking penal action against candidates who participated in the Delhi University Students Union polls this year and had their names defacing various public properties across the national capital but are staying away from deliberations among various stakeholders to undo the defacement.

A bench of Acting Chief Justice Gita Mittal and Justice C Hari Shankar was also unhappy with the way the anti-defacement drive was progressing.

It was far from impressed by the manner in which the civic agencies and the Delhi Metro Rail Corporation was conducting itself in spreading awareness about defacement and informing public at large that it is punishable with 10-year imprisonment.

The court was hearing a PIL filed by advocate Prashant Manchanda against the defacement caused during the DUSU election campaigning.

The bench had on last hearing directed that public be made aware about defacement being a punishable offence.

The bench on Friday impleaded the Centre in the matter since it wanted public awareness to be spread through Doordarshan etc.

The Central government standing counsel has been directed to submit a status report with regard to steps taken for publicising that defacement is an offence punishable with 10-year jail term.

“The dean of student welfare of University of Delhi shall convene a meeting of stakeholders  and place before us a set of guidelines which will be required to be implemented in further elections in the University of Delhi,” it ordered.

The counsel for all parties concerned have been asked to sit together and examine these guidelines and draft the ones agreed upon.

Aman Panwar, the counsel representing the candidates of DUSU elections of 2017, has been directed to meet counsel for DMRC and all  municipal corporations  to evolve a mechanism for removing/ suitably covering up the defacement.

“We shall consider penal actions which may be necessary qua defacement effected in the names of these candidates,” the bench said on Friday.