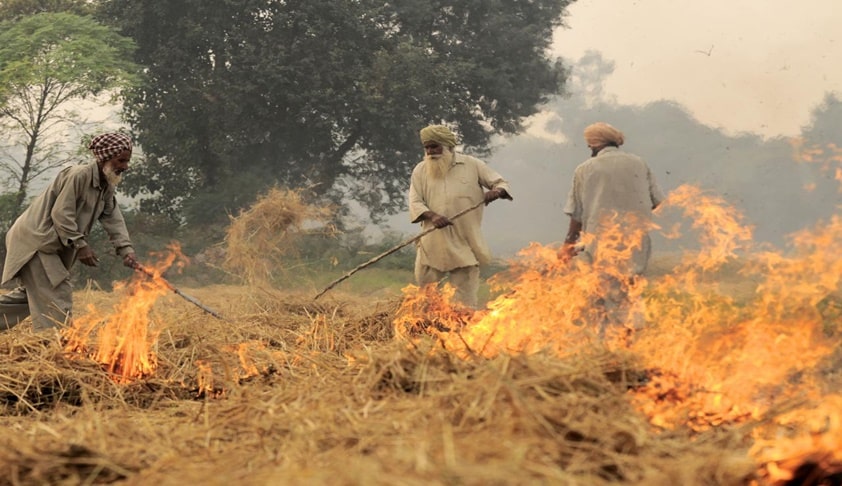 Taking note of the alarming levels of air pollution caused by the practise of burning of crop residue, rampant among farmers in Punjab, Haryana, Uttar Pradesh and NCT of Delhi, the National Green Tribunal ordered to deny the benefit of Minimum Support Price to farmers who continue to follow the practise.

The order was passed on Monday by the NGT Principal Bench at New Delhi presided by Chairman Justice Adarsh Kumar Goel on the basis of reports that various measures adopted by State Governments to control crop burning have not yielded desired results, resulting in deterioration of air quality after Dusshera.  The Tribunal took cognizance of news reports published in the Indian Express, Times of India, The Hindu and The Economic Times, which pointed out that Delhi recorded the worst air quality in four years and that farmers found it easy to pay fine rather than stop stubble burning.

The Tribunal noted that the scheme formulated by the Central Government to provide machinery and equipments to enable farmers to remove crop residue through means other than burning have not been fully implemented. In an earlier order, the NGT had observed  that 15,000 pre-mature deaths took place in Delhi in the year 2016 due to smog, to which crop burning was a contributing factor.

During the hearing, it was suggested to the Tribunal that economic incentives and disincentives could be given to dissuade farmers from indulging in stubble burning.

"We make it clear that the existing Minimum Support Price (MSP) Scheme must be so interpreted so as to enable the concerned States to wholly or partly deny the benefit of MSP to those who continue to burn the crop residue. If any such disbursements have already been made with respect to this year’s paddy crop, the same can be adjusted in future", ordered the NGT, which also comprises Judicial Member S P Wangdi and Expert Member Dr.Nagin Danda.

The Tribunal ordered that such a scheme should be notified, preferably by November 14. The short time was given on account of urgency of situation with regard to deteriorating air quality prevailing in NCT of Delhi and adjoining areas.

Also, to find a long term solution to the problem, the Tribunal ordered the personal presence of Chief Secretaries of States of Punjab, Haryana, Uttar Pradesh and NCT of Delhi, along with the Secretary of Ministry of Agriculture of Central Government on November 15.

Stubble burning is the deliberate setting of fire of straw stubble that remains in the field after harvesting of crops. Farmers find it a cheap and quick way to clear the field and dispose of the waste before the next farming season.  Therefore, farmers mainly from Punjab and Haryana indulge in this practise from late September to mid October every year to prepare the fields for the winter crop season. Experts say that this practise contributes a lot to air pollution and smog problem in Delhi.