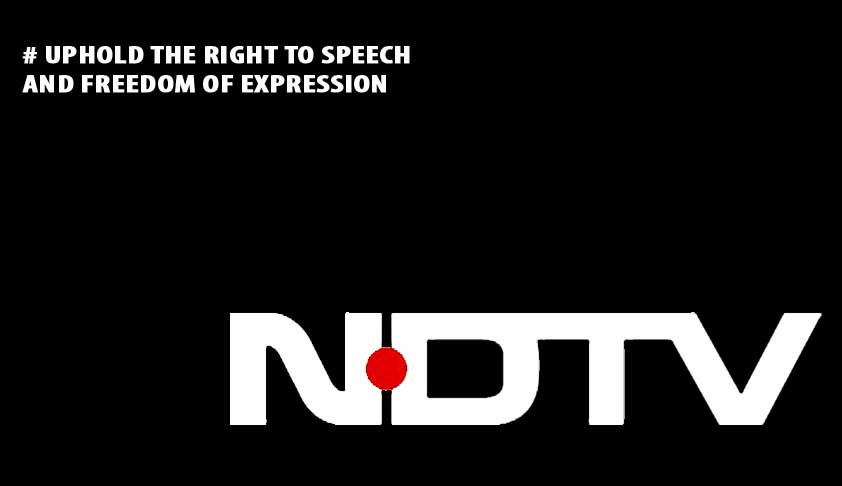 The Ministry of Information and Broadcast (MIB) vide an order dated 02.11.16 issued through the Director, Broadcast prohibited NDTV India Channel from broadcasting/rebroadcasting for 24 hours on 09.11.16 as a ‘token penalty’ (referred to as the 9/11 ban hereinafter). This order follows the penal recommendation of an Inter Ministerial Committee (IMC)for allegedly revealing...

The Ministry of Information and Broadcast (MIB) vide an order dated 02.11.16 issued through the Director, Broadcast prohibited NDTV India Channel from broadcasting/rebroadcasting for 24 hours on 09.11.16 as a ‘token penalty’ (referred to as the 9/11 ban hereinafter). This order follows the penal recommendation of an Inter Ministerial Committee (IMC)for allegedly revealing “strategically sensitive” details during its coverage of the Pathankot attacks in January this year.A lot of ink has since flown criticizing the ban and how it curtails freedom of speech and more so, the freedom of expression. In this piece, I trace out the journey of Articles 19(1)(a) and 19(2) of the Constitution and whether such a ban is legally permissible, if it is, is it legally valid.

Article 19(1)(a) as it stands today, grants a right to citizens to have a freedom of speech and expression. This right is not absolute and can be restricted by Article 19(2) for 8 exhaustive reasons – 1.) Sovereignty and integrity of India 2.)The security of the State 3.)Friendly relations with foreign States 4.)Public order 5.)Decency or morality 6.)In relation to contempt of court, 7.)Defamation and 8.)Incitement to an offence.The first prominent agitation demanding free speech in colonial India can be traced to 1820s when the Governor General passed a Press Ordinance requiring every newspaper or periodical to obtain a government licence, revocable at pleasure. It was vehemently opposed by eminent persons including Raja Rammohan Roy who connected dots with the American First Amendment.When the Constituent Assembly Debates began in 1947, the World War-II was over only 2 years back. So while debating on free speech and other fundamental rights, the atrocities caused by the executive in all nationswith conflict & colonies with untrammeled restrictive powers was somewhere a very important factor.

The first draft predecessor clause of freedom of speech was Draft Clause 8 of the Fundamental Rights Sub-Committee which was debated on 29 and 30 April, 1947. Clause 8 proposed to make the right subject to three things i.e. public order and morality and declared ‘grave emergency when security of union is threatened’. While introducing Clause 8 to the Constituent Assembly on 30 April 1947, Sardar Patel (whom the current ruling establishment regards a lot) dropped the proviso and the amendment proposed by Somnath Lahiri seeking to replace security with defence was rejected. In the draft Constitution of February 1948, Draft Article 13(1)(a) guaranteed freedom of speech and expression which was restricted by Article 13(2) for Libel, Slander, Defamation, Sedition, any matter against decency or morality or which ‘undermines the authority or foundation of the state’. After further debates, in December 1948 Draft Article 13(2) was amended and the expression ‘undermines the authority or foundation of the state’ was replaced with ‘‘undermines the security of, or tends to overthrow, the state”, thereby bringing back security as a reasonable restriction. On further debates, on October 17, 1949, draft Article 13(2) was rephrased and ‘contempt of court’ was added as a restriction. At the advent of democracy, Article 19(2), as it then read, incorporated Draft Article 13(2) as finalized on October 17, 1949. The Supreme Court, immediately after independence decided two landmark cases and interpreted the term ‘undermines the security of, or tends to overthrow, the State’ in a speech protective manner. The Government responded swiftly and vide the first amendment, amended Article 19(2). Interestingly, this amendment was carried out by the same Constituent Assembly which had incorporated the freedom of speech and not by elected parliamentarians as the first Lok Sabha elections were held only in 1952. Notable changes were using the expression ‘reasonable restrictions’, bringing in the public order clause, adding friendly relations with foreign states and removing libel and slander. Vide the 16th Constitutional Amendment in 1963, to promote national integration, Parliament added ‘sovereignty and integrity’ as another reasonable restriction sculpting Article 19(2) as it stands today.

Humans are social animals. We are communicating beings. We express in various modes by communicating it to others. The chief mode of expression to a large audience is television and the chief item to be distributed is News. The role of the mode or as we may put it, the media, is to trace out the truth and spread it across without bias and prejudices especially when the news relates to ruling establishments and national concerns. The media needs to speak freely.It was John Stuart Mill, who in his chapter titled ‘On the liberty of Thought and Discussion’ argued for the first time that a free exchange of ideas and opinions was the only method of arriving at the truth. Why truth? Because, opinions can be right or wrong and true or false. Opinions are perspectives which depend on an individual’s way of looking at it. The 9/11 Ban Order cites Section 20(2) and 20(3) of the Cable Television Networks (Regulation) Act, 1995 and Rule 6(1)(p) of the Programme Code, Cable Television Networks Rules, 1994, which grant powers to the Government to regulate or prohibit transmission or re transmission of any channel or programme, to justify the ban as a ‘token penalty’. From where does a concept of highly discretionary ‘token penalty’ came has not been discussed. The whole web of all the provisions cited to moot that NDTV India was at fault in the 9/11 ban order, is overbroad, vague and is intended to generate a chilling effect for channels to streamline them to telecast only government friendly news else stay prepared for repercussions. The unreasonable penalty imposed on the channel which has been a strong critique of the current ruling establishment alone is further violative of Article 14 as well as it is arbitrary and unreasonable in nature without any rational nexus with the object sought to be achieved.In the garb of national security, a particular channel has been punished and while sending this piece, another channel in Assam has also been banned for some other reason. In my submission, the 9/11 ban amounts to excessive control on expressive conduct and affects the right to seek, receive and impart information. While imparting information on the happenings during the terrorist attacks, like other news channels and print media, NDTV India reported facts and the truth. The whole castle of infrastructure of free speech gets flushed when media is banned from reporting, as a deterrent measure for others to report as per whims and fancies of the ruling establishment. It is a matter of deep concern once the government gets an easy hand on its banning power. In most probably, NDTV India will challenge the order before 9/11 dialing 19(1)(a) and 14. We must stand united’ the 9/11 ban is a classic example of the ‘today me, tomorrow you’ theory. Hoping for the best, fingers crossed!