Disclose policy regarding photo-advertisements of politicians at the expenditure of the State: CIC to Government 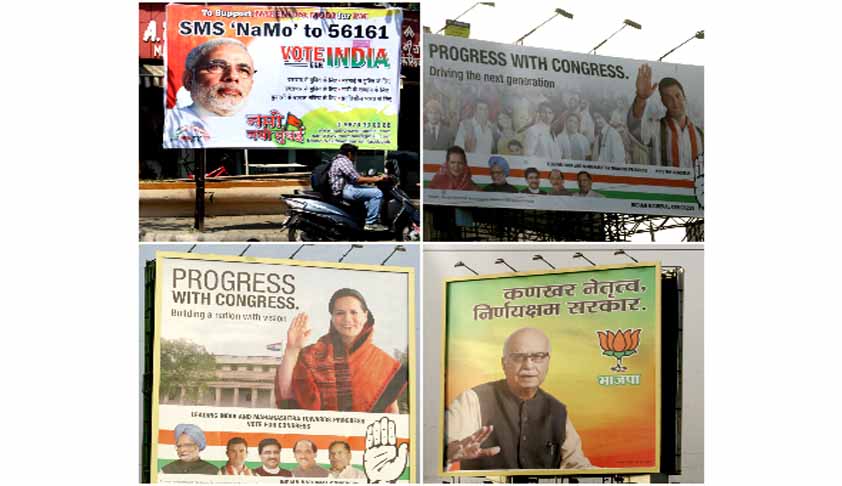 CIC, Prof. M. Sridhar Acharyulu, has asked the Union and Delhi Governments to disclose their policy regarding photo-advertisements of politicians at the expenditure of the state, in view of its condemnation by Delhi Lokayukta, Professor Madhava Menon Committee and the Supreme Court of India.Responding to a complaint by Mr. Subhash Chandra Agrawal, the CIC required the Chief Secretary of Delhi...

CIC, Prof. M. Sridhar Acharyulu, has asked the Union and Delhi Governments to disclose their policy regarding photo-advertisements of politicians at the expenditure of the state, in view of its condemnation by Delhi Lokayukta, Professor Madhava Menon Committee and the Supreme Court of India.

Responding to a complaint by Mr. Subhash Chandra Agrawal, the CIC required the Chief Secretary of Delhi and Union Cabinet Secretary to disclose their policy on this issue under Section 4 of Right to Information Act and also inform the appellant about their proposed steps to implement recommendation of Lokayukta of Delhi in effectively preventing photo publicity of the political rulers. However the Commissioner refused to penalize the PIO for non-disclosure, saying: "As the disclosure of information involves policy decision to be taken by the higher authorities in the Government, it is not just and proper to penalize the PIO for non-disclosure of policy, who does not have any role in decision making process and in view of the observations of Delhi Lokayukta not to issue advise/recommendation to the lower level officers, the Commission finds no ground for imposing penalty on PIO and thus the penalty proceedings are dropped."

Mr. Agrawal sought action on the Delhi Lokayukta's recommendation to President to advise prevention of photo publication of Chief Minister and Minister (referring to then C.M. Shiela Dixit and Rajakumar Chauhan Minister of Delhi Government) on Loan Application Forms of SC/ST/OBC Minority Finance and Development Corporation, selling at Rs 100 per application, describing it as unusual and without any justification.

The complainant had contended that, "They are intended to glorify and develop personality cult of the individuals. Putting photos on such official forms is only to gain unfair political advantage over the rivals especially during the elections."

The Lokayukta had recommended issuance of an advisory by the President of India to the respondents to desist from printing their photographs on the application forms under the Dilli Swarojgar Yojna, as well as efface or block the photographs if any printed on the existing forms prior to their use.  In its order dated 6th May 2013, he sought President to direct the Government of NCT of Delhi to frame appropriate guidelines to govern issuance of advertisements, hoardings etc. with photos of public functionaries even during the periods when Model Code of Conduct is not applicable.

Lokayukta modified it in its special report, after it was brought to its notice that in spite of Lokayukta's earlier report, minister directed publication of his photo and CM's photo. Lokayukta refused to issue direction to lower officers as they had no power when political executive decided other way.

The CIC referred to information given to a media RTI request that Rs 58 Crore was spent by Union on ads of which Rs 22 crore was spent on Nehru-Gandhi family photos, and huge amounts spent similarly by states of Andhra Pradesh, Delhi and Uttarakhand.

The Supreme Court criticized such attitude, in its April 2014 order. A three Judge Bench of SC, comprising of CJI P. Sathasivam, Justice Ranjan Gogoi and Justice N V Ramana, called it unreasonable spending of public money, not in public interest. It was pleaded before SC in this PIL by Common Cause, that the use of public office and public funds for personal, political or partisan purposes is clearly malafide, illegal and not permissible under the Constitution.

This Committee, in its report, recommended that Government advertisements in media must not have faces of ministers and leaders of ruling party. It recommended that government advertisements should avoid photographs of political leaders, as well as the name and symbol of the parties. Further, it was essential then it should be restricted to photographs of the President/PM or Governor/Chief Minister.

The Centre has now sought the Centre's response on the Report. In view of the aforementioned developments and recent directions of the apex court the Commission found that the matter raised by the appellant is of great public interest.

The CIC hence observed, "The Government of India and similarly the Governments of states have an obligation under Section 4 of Right to Information Act, to disclose on their own what their policy is and when they would start implementing it. Especially when the elections are almost happening every year regularly at one region or the other, such as elections in Delhi now, the Governments have to expedite the disclosure and that policy should be duly publicized otherwise than through advertisements. As pointed out by the appellant that the political leaders complaining against the photo publicity of the earlier Chief Minister of Delhi before Lokayukta are now being part of the government, the Commission finds need of the people's right to know the policy on political publicity at their cost."